Tong brought out Savage Lands and Swamp via Verdant Catacombs to kick things off, which led into a Putrid Leech. Klauser’s double Sejiri Refuge bought him a slight leg up, making the life totals 22-19 before any attacks. That state couldn’t persist forever as a pumped Leech came across and made the life 18-17, still in Klauser’s favor. Sprouting Thrinax joined the Jund jamboree, and Tong passed.

Klauser had only a Scalding Tarn to join his two Refuges. 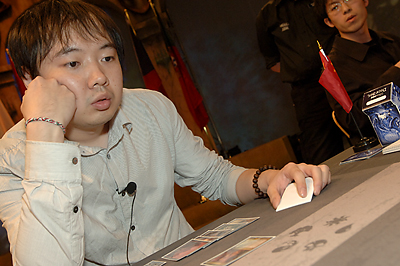 Wu Tong tries to Jund his team to the title. Tong kicked into his casade engine, casting a Bloodbraid Elf and finding a Lightning Bolt to bring Klauser to 15. When he attacked, Klauser pointed a Path to Exile at the 3/3 Lizard. He still fell to 8 from the seven remaining power on the attack, and the life totals became 15-8, advantage Tong.

Klauser deployed a powerful planeswalker ally, Jace Beleren, and drew into a second copy, but the more important double in his hand was Path to Exile. It took care of the Putrid Leech after pump, but Bloodbraid Elf still dinged him for 3, taking it to Tong 13 – 4 Klauser. Tong sent a Maelstrom Pulse to take care of Jace.

The two players replaced what was lost: Leech for Tong and Beleren for Klauser. Klauser dropped to 3 to break another fetch, but the card off of Jace couldn’t find him more removal than the solitary Lightning Bolt he had left. At 3 facing Bloodbraid Elf and Putrid Leech, he sighed and passed.

Tong’s own Lightning Bolt to Klauser’s face was all it took for him to concede.

In Extended, turn one Blood Moon wasn’t enough to stop China’s Zhiyang Zhang combo off of basics and Chrome Mox, giving the lead there to China. In Legacy, the first game quickly concluded in Austria’s favor as Benjamin Rozhon comboed out – that made the total game count 2-1 in favor of the Chinese team.

Now on the play, Klauser went Sejiri Refuge and Glacial Fortress into a previously unexpected Zendikar common: Spreading Seas. The Seas shut off the mana fixing of Tong’s Rootbound Crag, but failed to find a third land off of the cantrip. Still, the disruption of the Spreading Seas seemed to work – Tong had no play on three lands.

Klauser found a second Sejiri Refuge, going up to 22, and Tong fetched out a second Swamp off a second Catacombs to descend to 18. The BB fueled a 1BB Vampire Nighthawk. Klauser merely fetched a Mountain and passed, dipping to 19 from Nighthawk beats. He showed restraint, retaining his Lightning Bolt and instead saving the mana to counter Tong’s Maelstrom Pulse on Spreading Seas with Double Negative.

Klauser untapped and laid another planeswalker ally, Ajani Vengeant, who kept the tapped Nighthawk in lockdown. With Tong’s red mana still locked away under the Spreading Seas, he could not cast spells and was forced to discard a Sprouting Thrinax. 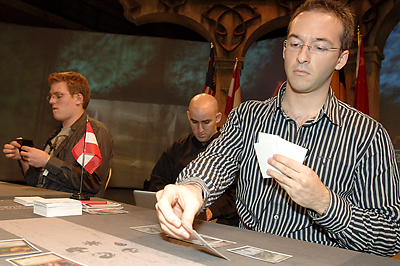 Seasoned pro Benedikt Klauser tries to keep the title in Europe. The Austrian continued to spread the Seas with a third copy, now locking his Chinese opponent out of green mana as well. Ajani continued to tick up and keep the Nighthawk on ice. Sphinx of Jwar Isle arrived on the Austrian competitor’s side of the table.

Tong finally found an untapped source of red, and used it to Blightning Klauser’s hand and planeswalker. Klauser discarded Day of Judgment and Lightning Bolt, and then pointed a second copy of the burn spell at the Nighthawk.

The Sphinx beat Tong down to 9, then Ajani helixed him to a precarious 6. When the Chinese player’s second Vampire, Malakir Bloodwitch, was countered with Essence Scatter, Tong packed it up.

Extended saw triple Blood Moon – two of them strapped to 2/2s in the form of Magus of the Moon– take the game to tie the match 1-1. In Legacy, many Merfolk Lords and a suite of countermagic left Rozhon at 1 life and without options, also tying it at 1-1. With all matches heading into a decisive third game, the countries were tied at 3-3.

The Austrian put Spreading Seas onto the Swamp, attempting to keep his opponent from China off of the double black required for the Vampires in his deck. Leech got in for 4 anyway, putting the life at 17-all. It turned out Tong had no third land, and Klauser had a second Seas for his Forest, locking him out of useful colors entirely. Klauser’s Arid Mesa became a Plains and his life total dipped to 16.

Now that Klauser had a Mountain untapped, the Putrid Leech reverted to a simple Lightning Bolt-proof bear and took Klauser down to 14, then 12. He then called a reckoning in the form of Day of Judgment, sending the lone 2/2 packing.

Both players played draw-go for a few turns, which made sense because both were running sources of blue. Well, both had them on the battlefield, but only one willingly. Eventually Klauser found a sixth mana source and laid Sphinx of Jwar Isle. The Sphinx took big bites out of the Chinese player, and Tong continued to discard, unable to find any lands. Finally, his life was reduced to zero and the marauding Sphinx left with his master.

At the end of the match, Tong was still smiling. Why? His compatriots had won both their matches 2-1, meaning despite Benedikt’s best efforts, China took the crown. Congratulations to the Chinese team: Bo Li, Wu Tong, and Zhiyang Zhang your 2009 National Team Champions!