the match began, I asked Jon Sonne what he thought his team's chances are in the finals.

"I think they out-opened us a little bit, but other than that it went as we expected," Sonne said. "We both had the same plans that we used in the Swiss." 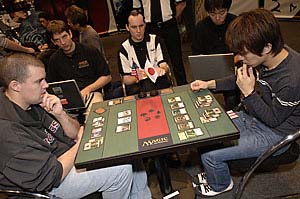 How would the rematch from Saturday turn out?

This individual matchup looks strong for the Japanese actually, as I've found that the biggest weakness of Dimir decks is often a swarm of tokens. The Dimir guild is adept at handling single threats with cards like Brainspoil, Disembowl, and Drift of Phantasms, but they lack a card such as Rolling Spoil or Cleansing Beam that can keep swarms of 1/1s under control.

A Selesnya Signet from Shimura enabled a turn-three Nullmage Shepherd. Sonne wasted no time in enchanting it with Clinging Darkness as he would otherwise have to discard from playing a Dimir Aqueduct. Shimura also wasted no time in removing it when he leapfrogged to four creatures in play because of Transluminant and Fists of Ironwood.

Sonne added a Dimir House Guard and then took down Golgari Rotwurm with Brainspoil. Shimura reinforced with Siege Wurm and Sonne, with five lands, had the option of playing Junktroller or Tattered Drake. He chose to play for the future and went with the Drake, then took five from the Wurm. Shimura summoned a Mausoleum Turnkey that didn't return anything but kept up the pressure. 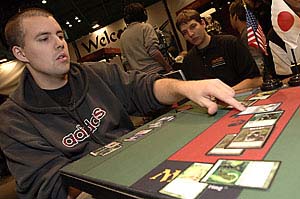 Sonne pushes his Sphinx into the Red Zone.

Sonne drew an Island and stared at a hand including another Drake, Putrefy, Belltower Sphinx and Junktroller. He played out Snapping Drake with two Swamps up. Shimura had a fresh Golgari Rotwurm and swung with the team. Sonne's Drake blocked the Turnkey and House Guard and Snapping Drake teamed up on the Siege Wurm. The Wurm and the Turnkey were sacrificed to the Rotwurm and Jon fell to 7.

On his turn he simply played out Belltower Sphinx, with Shimura's lack of a fifth black mana being the only thing saving him from being dead on the board. Shimura attacked him down to four and made two more tokens with another Fists.

Sonne untapped and drew Drift of Phantasms. He briefly thought through the possible transmute targets, but soon realized that nothing would help him.

Shimura had the turn-two Signet again, while Sonne had a slow start with a hand including two Dimir House Guards, Strands of Undeath, and a four lands. Unfortunately he drew two more lands after that, although Shimura wasn't punishing him given that his first play was Carven Caryatid and he didn't have a third land. That changed on his next turn and he enchanted the Caryatid with Fists of Ironwood and then immediately convoked out Scatter the Seeds. Suddenly Shimura had quite the army of little men.

Sonne decided to play aggressively, attacking with his first House Guard and summoning a second. He might have been figuring that Shimura wanted to convoke this turn and therefore wouldn't attack. Instead, Shimura had Centaur Safeguard and then attacked with three of his five tokens, a play that only made sense if he had another Scatter. 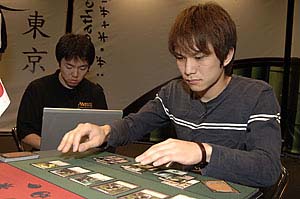 Jon chose not to block, fearing Gather Courage, and fell to 17. Shimura of course immediately Scattered again, going up to eight tokens. Sonne could only make a Tattered Drake, falling further and further behind with each passing turn. Shimura sent the team and Sonne blocked with his Drake on Safeguard and the House Guards on tokens. Shimura did indeed have Gather Courage to kill a House Guard, and Sonne took 6 and fell to 11.

Two Transluminants from Shimura made his army even more ridiculous. Sonne's Strands of Undeath knocked out the Japanese player's last two cards, which happened to be two rares: Vulturous Zombie and Woodwraith Corruptor. In any case, Shimura hardly needed them.

Two more attacks and it was all over. Shimura's tokens trampled around the Dimir blockers and ended the match.

After the match Sonne commented that he regretted attacking with his House Guard on turn five, but I don't think it would have made any difference. Shimura's army simply grew too large, too quickly.