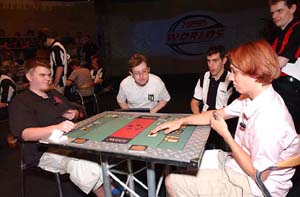 You do not have to look very far back to find history between these two players. Just a few hours ago they played an intense match in the individual portion of the tournament, where Nieminen eliminated Walls from the tournament by defeating his Astral Slide deck with Wake 3-2. Although this may give the Finnish player psychological advantage, he also just came off an exhausting two hour mirror match in the top 4, which he ended up losing to Japan's Jin Okamoto. Meantime, Walls used the time to eat, relax, and prepare for the match.

In terms of decks, both are sporting some very powerful cards. There are such gems are Decree of Justice, Dawn Elemental, Future Sight, and more. Walls is playing a white-blue deck while Nieminen is playing white splashing for four black cards.

Walls aggressively chose to keep a hand of five white cards and two Islands going first. This did not pay off as he did not draw another land for several turns. This gave Nieminen time to summon a 3/3 Daru Stinger and a Vile Deacon. Walls Pacified the Deacon only to have it destroyed via Piety Charm. Nieminen summoned Grassland Crusader and attacked for seven.

Walls Pacified the Deacon again, but it was too little, too late. Nieminen added a Gustcloak Harrier to the mix and Walls was packing his cards a turn later. At the end of this game Nieminen revealed his hand, showing that his draw consisted of only five spells and nine lands this game. Had Walls managed to top-deck lands or mulligan into a better hand, Finnish player could have been in trouble.

Nieminen was visibly exhausted during the match. He was not up to his usual banter and his disposition was not further improved by a mulligan he had to take in the second game. 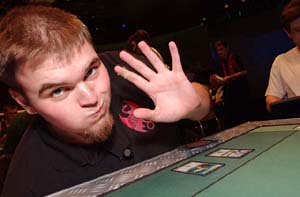 "You have no idea what my morph is, do you?" Walls asked. Nieminen just shook his head. He finally decided to block and ended up trading for a Frontline Strategist. Walls amplified a Warhawk twice and followed it up with Dragonstalker. Nieminen summoned a Grassland Crusader, but could not really deal with the next attack and was forced to go to the deciding game.

"I think I am going to sideboard," he said.

He made the following changes to the deck:

There weren't very many soldiers in the deck to begin with. Perhaps only being able to amplify it for one in this game finally prompted him to switch strategies.

As the two players were getting ready to play Game 3, Walls asked for the oracle wording on Sunstrike Legionnaire. Nieminen fingered a card in his hand meaningfully.

"Side bet you aren't holding it!" Walls offered. "Two euro!"

The Finn seemed to contemplate it and finally declined. "Come on," Walls kept at it, "I will give you 40 to 1 that the card you are fiddling with isn't a Legionnaire." Nieminen did not take that bet either. 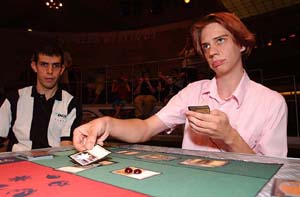 He did however tap his mana on turn two.

And played a Silver Knight.

He followed it up with a turn three morph.

Walls elected to play his Wingbeat Warrior face up on turn three and took damage from his opponent's two creatures going to fourteen. He then attacked back for two and summoned another face up potential morph – Aven Liberator.

"Who needs spells?" said Nieminen as he played land number five and passed the turn. Walls kept Liberator back to block with, attacked for another two points of damage with the smaller flyer and summoned a Covert Operative.

"This isn't looking too good for you," Walls goaded.

Nieminen summoned a Grassland Crusader and Walls matched with Gempalm Avenger. The Finn drew the next card, dropped the four lands he was holding in hand and conceded the match.