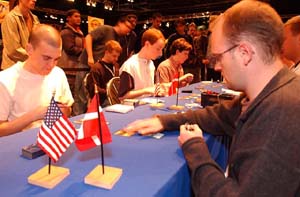 It may be cliché to use phrases such as "overcome adversity" and "against all odds", but it describes perfectly how the United States made it to this playoff match. They certainly were not favored coming into Worlds, since Franz and Ranks are newcomers to the Pro Tour. Just like last year, many speculated that this would be the second year the United States lost. For a while, that seemed to be true. After some disappointing records in the individual rounds, they clawed and scratched their way through today's Team Rochester rounds going 4-0, and had tiebreakers go their way so they were still in it. As a result, they forced this playoff match against Denmark to see who would advance to Sunday to play against the Germans.

Ranks and Christensen started off quick, with Treacherous Werewolf trading with Barbarian Outcast. Ranks got the Hill Giant team of Springing Tiger and Brawn, and Laier tried to keep up with a Soul Scourge that fell to Crippling Fatigue. A second Barbarian Outcast became huge with the help of Shade's Form, and Strength of Lunacy made Brawn a bit more threatening. The game went into race mode, and Ranks pulled it off to win the first game of the match.

Harvey came right out the gate with two Basking Rootwallas and Druid Lyrist, and put the Lyrist under Wormfang Drake. Lost in Thought slowed down the 3/4 flier, and both Rootwallas died in combat thanks to Benevolent Bodyguard and Guided Strike. Phantom Nomad and Chainflinger made Cleeman's board better. Phantom Tiger and Dreamwinder evened it up for Harvey, but Cleeman's Shieldmage Advocate meant more bad news for Harvey's blue/green deck. Despite Harvey's best efforts, it was only a matter of time before he lost the first game. 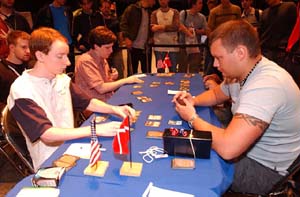 Franz had a very aggressive opening draw, and had out Suntail Hawk, Benevolent Bodyguard and Pilgrim of Virtue by turn three. Teroh's Faithful and Angelic Wall followed, and Laier had Krosan Beast and Aquamoeba. Arcane Teachings on Suntail Hawk gave Franz a great clock to work with, Coral Net enchanted it when Franz only had one card in hand, and was followed by Thriss, Nantuko Primus. Franz let the Hawk die off rather than become locked under the Coral Net. Besides, Laier had an active Skyshooter in play. Ember Shot brought Laier to two life points, but Primus got to work while Laier's forces grew. Franz' only hope was to stall the game out as long as possible in hopes of drawing a burn spell, but it didn't happen.

Christensen had a much better draw Game 2, stealing Crippling Fatigue with Mesmeric Fiend, and Anger came out turn four. Ranks slowed down Christensen's attack with Springing Tiger, but Christensen improved his board tremendously with Soul Scourge and Cabal Torturer. Ranks' Carrion Wurm at least kept back most of Christensen's army, but the Scourge in the air did pose a problem. Christensen even cast Innocent Blood to put Anger in the graveyard, while Ranks had to get rid of Springing Tiger, and was left with only the Wurm. Waste Away took out Mesmeric Fiend, which allowed Ranks to get back Crippling Fatigue. This gave him the chance he needed to get back in the game, as it took out the Soul Scourge and waited in the graveyard for the next relevant threat. Christensen rebuilt with Mad Dog and Earsplitting Rats. Brawn gave Ranks more defense, but Christensen played a bomb in Chainer, Dementia Master and got an unblockable Krosan Constrictor from Ranks' graveyard. This was too much to handle, and they went to Game 3.

Ranks had a solid start Game 3, bringing out Dusk and Fledgling Imps. Unfortunately, he missed his fourth land drop, and had a hand that just needed one more swamp to come out swinging. Christensen went to the air with Soul Scourge, so Ranks discarded Filth to Fledgling Imp, and the race was on. Despite never drawing a fourth land, Filth was enough to let Ranks punch through and win his match. The irony here was apparent, as Christensen did not respect the Filth enough to take it over Fledgling Dragon, even though the Dragon was unlikely to become big due to black/red's inability to achieve threshold easily.

Game 2 started off much better for Harvey, as he played Nantuko Tracer and followed by Ghostly Wings to make it a quick 3/2 flying threat. Unfortunately, Cleeman nullified it right away with Lost in Thought. To make matters worse, Harvey couldn't find a third land, and Cleeman was building his forces every turn. Harvey finally drew a third land and summoned Wormfang Drake, but Ghostly Wings and Churning Eddy kept the tempo advantage on Cleeman's side. Things slowed down a bit, and Harvey may have been able to get far ahead with Beast Attack if not for Cleeman's Syncopate. The board was just about even, but once again Shieldmage Advocate was a huge nuisance for Harvey's blue/green deck. Spurmage Advocate added to Cleeman's defense, and he attacked through the air with Hydromorph Gull and Aven Fisher thanks to Aether Burst clearing the way for a turn. This brought Harvey to two life points, and Chainflinger finished the job to give Cleeman the match. 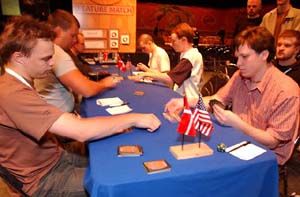 In Game 2 between Franz and Laier, the American had Suntail Hawk and Chainflinger, while the Dane had Wormfang Drake and Krosan Restorer. The Drake died to Chainflinger and Fiery Temper, but Laier simply played another. Just then, Glory improved Franz's board drastically (as it has a tendency to do), and Laier played Rabid Elephant, and gave it Ghostly Wings. Franz halted that plan with Ray of Revelation. Unquestioned Authority made Glory unblockable, and it was off to a final and deciding game between Franz and Laier to see which team would play Germany in the finals.

Laier mulliganed an opening hand that contained island as an only land, but did have Peek. Franz had a less than explosive start, playing his first spell on turn three- Suntail Hawk. Laier matched with his first non-land card in a fourth turn Springing Tiger. It died to Sonic Seizure on end step, which caused Franz to lose Crackling Club. The Hawk attacked for one, and was joined by Militant Monk. Laier brought out another big threat when he summoned Rabid Elephant, and Franz answered back with Dwarven Strike Force, which randomly discarded Floating Shield. It attacked with the Hawk to deal five damage. Laier untapped, and put Ghostly Wings on his Rabid Elephant to hold off Franz's team, but the American simply dumped Glory to Dwarven Strike Force and attacked for the win to bring the Americans one match away from achieving the impossible.

Tomorrow, they will need to overcome Germany in front of the cameras to complete it.