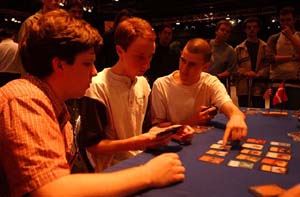 They weren't supposed to be here, right? I mean, come on, this US Team was the worst ever by far. Sure, Eugene Harvey has been to the top of the Worlds Team mountain, but this team is even less experienced than the Justin Gary-led squad that fell in '97.

Someone forget to tell them just what kind of underdogs they were supposed to be. After 18 rounds of individual play and four perfect team drafts, the USA is now in a do-or-die playoff with Denmark to see who gets to battle Kai Budde and the Germans in the finals tomorrow.

Had normal tiebreakers been used, the US would be in the Finals and Denmark would be watching from the sidelines. But because tiebreakers have little meaning when 3/4 of the results are from individual matches and not teams, the tournament staff had determined in advance that such a playoff would be necessary.

And that is how Andrew Ranks, Eugene Harvey, and Eric Franz came to draft against Allan Christensen, Jonas Cleeman, and Peter Laier.

Harvey had to kick off, and opened a pretty bad pack. He selected an Elephant Ambush first and Franz took Syncopate second. The Danes took Anarchist, Pulsating Illusion, and Skyshooter, which accurately indicated their color preferences.

Harvey got a second Ambush in pack #2, but little else of consequence happened. In the third pack, Christensen opted for a Gravedigger over a Dwarven Strike Force, which went all the way around to Franz. Cleeman, who looked to be blue/white in the middle, took a Chainflinger as a potential splash.

There was some arguing between teammates Laier and Cleeman over whether Laier should take Seton's Desire or Rabid Elephant with the first pick in pack 5. Cleeman's opinion prevailed, and the Dane took the creature. Ranks ended up with a Volcanic Dragon from that pack, and Harvey selected his second Dreamwinder, letting Cleeman get an Aven Fisher on the wheel. Dreamwinder is quite efficient in the blue mirror.

As soon as Ranks saw that Christensen was committing to black/red, he knew his plan was to be black/green, since the green creatures are much harder to kill. This left him with the interesting choice of Morbid Hunger or Krosan Beast in pack 6, and he opted for the removal, letting the Squirrel Beast slide to Laier. The rest of that pack was kind to the US, giving Harvey a Beast Attack, and Franz—firmly in red/white—an Aven Flock.

The colors for all six drafters were pretty cut-and-dried by the end of the Odyssey packs: Ranks was black/green, Harvey was blue/green, Franz was white/red, Laier was green/blue, Cleeman blue/white, and Christensen black/red. Both Ranks and Cleeman were looking to splash red.

Torment was relatively uneventful. Harvey had to take a Basking Rootwalla with an early pick, which ended up letting Laier get a Deep Analysis. Ranks took a Crippling Fatigue over Chainer, Dementia Master, which went to his opponent Christensen. The US caught a break when Franz opened Fiery Temper, Possessed Aven, and Carrion Wurm, as all three cards fell right into the appropriate decks.

The Danes were still fighting amongst themselves; Laier took an Aquamoeba that Cleeman had his sights set on, and some vigorous gesturing and huffing and puffing ensued.

The first Judgment pack gave Harvey a Wormfang Drake and Franz a big Glory bomb. Unfortunately, as the packs progressed, Christensen ended up with two blue Drakes which would be trouble against Franz.

The Danes made a bad pick when they gave Laier a Fledgling Dragon, and allowed Filth to get to Ranks. Filth is insane in the black mirror, and is clearly better than a 2/2 flier. 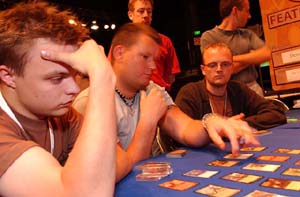 Franz ended up with a few Arcane Teachings—key to the white/red archetype. The Danes ended up with some real hefty rares by draft's end—Silver Seraph for Cleeman and Thriss, Nantuko Primus for Laier.

Prediction: Harvey has better cards than Cleeman and should win the middle match. The one wild card will be Cleeman's maindeck Dogged Hunter against Harvey's double Ambush and Beast Attack.

Ranks made the correct decision to go into green once Christensen committed to red/black. His guys are just bigger and Filth is game over. Christensen has at least four 2/2's for 2 mana, so he might get the jump on Ranks, but Ranks should pull out the long game. The wild card in this match is Christensen's Chainer.

Laier's blue/green deck is just packed with fat and has good defense against Franz's fliers, plus some maindeck enchantment removal for his Teachings. The two Wormfang Drakes in Laier's deck will be too much for Franz. The wildcard is Franz's Glory, which is capable of stealing wins.

Prediction: The USA should win 2-1