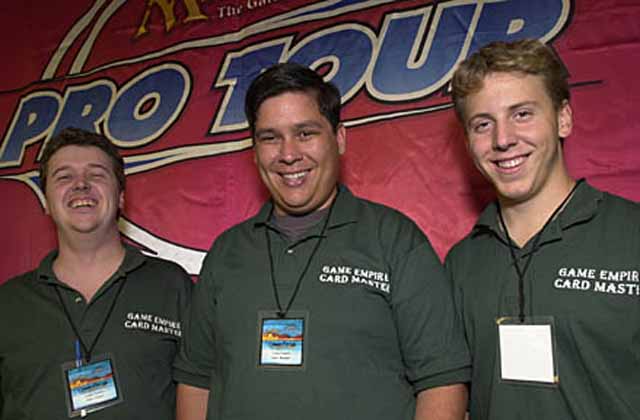 In the last Team Pro Tour in Washington DC, Team Game Empire lost in the finals against Your Move Games. Now, Kurt Burgner (30), Alan Comer (31) and Brian Selden (19) are back together, but their situation has slightly changed as Brian has moved to Berkeley to study. "Back then we could play together. Now we don't play at all," Comer explains.

Team Game Empire was formed before PTDC. At that time, both Brian and Alan lived in San Diego, while Burgner lived in Los Angeles. So the three of them got together and made a team because they were able to practice before the event. Choosing a team name was not too difficult either. Their name is the same as a game store in San Diego, which is also their sponsor. "The paid the most," Comer laughs. Then again, all three of them are solid players. In addition to the top 8 in the Team Pro Tour last year, Comer has three individual top 8 finishes; 1997 Pro Tour Los Angeles, 1998 World Championship and 1999 Pro Tour Chicago. Burgner made top 8 at Pro Tour Mainz and in Pro Tour Los Angeles this year where Selden also made the playoff. Selden is also a former World Champion, he won the title in the 1998 World Championship in Seattle.

The team didn't have any problems qualifying for this Team Pro Tour. Altogether, they have 109 Pro Tour Points, more than twice the number required to get a slot. In addition, they have a high rating from last year, and naturally, they wish to do well again. "I expect us to do pretty well because of the past history, but I am afraid we haven't played enough," Comer says. Last year, the three of them playtested before the team event. This year, the only preparation they got was to play in the Invasion prerelease. But all of them has previously shown that they have a good basic understanding of the game. "Our strenght is that we have good play skills," Selden agrees.

Burgner emphasises importance of having fun at a team event. "We get to cheer for the teammates, and even if you lose or make a mistake, the others can still win," he says. Comer, grinning, adds that the team's specialty is to win their matches 2-1. So the team feels that it is very important to be able to work together. "We don't argue a lot. We respect each others' decisions," Comer explains. "It's important to keep an open mind, and to be able to share," Burgner adds. Their weakness though is their lack of preparation. "It's hard to communicate in draft. We'll probably do like this - " Burgner says, and then he finds a card, turns the back up and starts pointing at the colours on the card back illustration and then at his teammates...

Game Empire won their first match of the Pro Tour, but they don't have any special strategies for the weekend. "In Sealed, we just figure it out from the cards we get," Selden says. While other teams have worked on their draft strategy for a while, Game Empire hasn't started discussing that yet. "We have to talk tonight about who'd like to play each colour," Brian explains, of course hoping that it will be necessary to find a draft strategy. While Game Empire's favourites for this Pro Tour are Antarctica and Your Move games, the three of them agree that their team should be able to finish in the top 16. But of course they hope for top 8, or to repeat their performance from last year. "I want to make top 4, because I want to be on camera!" Burgner smiles - and the team laughs.