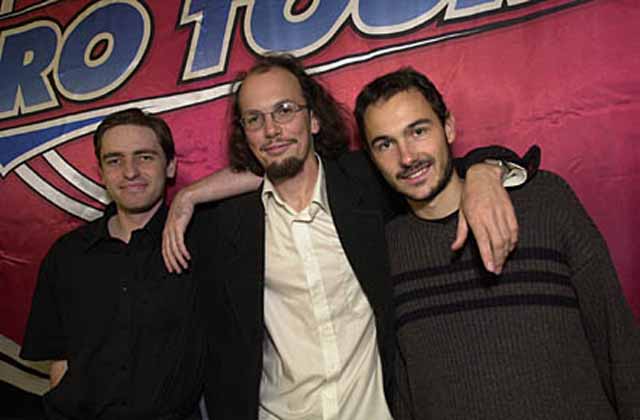 Originally, Nicolas Labarre (23) and Manuel Bevand (23) of Team Yalta were qualified for the Team Pro Tour along with Nicolas' girlfriend Marie-Laure Saulnier after a great top 4 performance in Grand Prix Cannes. However, Marie-Laure had a busy schedule, and she felt that she would lower the team's chances by going. So she chose to stay at home, and Antoine Ménard (21) joined the two others to form Team Yalta. Two rounds into the Pro Tour and with a 0-2 record, Nicolas felt bad about her not going. "We're the worst team you ever interviewed," Manuel jokes.

Qualifying on Pro Tour Points, Yalta doesn't look like a bad team on the paper. Nicolas has three Pro Tour top 8 performances and two Grand Prix top 8s on his list of accomplishments. Manuel is one of the true Pro Tour veterans of France, and although he hasn't yet made the final playoff of a PT event, he has three Grand Prix top 8s on his record. "Manuel is Dad. He is the father of this team, but he is a bit old-fashioned," Antoine smiles, causing Manuel to put up a shocked expression. "Antoine used to be a rules-lawyer and an asshole," Manuel replies. "But now he is a good guy. We changed him."

Yalta claims to be the good guys from France, but being good doesn't necessarily mean being lucky. According to Nicolas, the team got a really bad card pool in the first Sealed. "We had no removal, no bounce, no good creatures, no counters..." he complains, blaming the bad result on the card pool more than the lack of practice. As the team members live in three different cities, they didn't even see each other after Worlds, so they didn't playtest much - Antoine played a bit with Black-Ops, but that was it. Still, their goal was to make top 20 and get some money. "At least that was our goal a few rounds ago," Manuel jokes.

Yalta is a term that was used at the end of World War 2, when Roosevelt, Stalin and Churchill divided the world into three parts. But the team didn't really choose it because of the historical reference. "We had no better idea," Nicolas smiles.

The three Frenchmen didn't really have a strategy for the Team Pro Tour. "We all speak French, so we confuse our opponents by speaking French," Manuel smiles, but then they get a tad more serious. "In Sealed, we try to adapt to the card pool and not to rely on the cliche colour combinations, like blue and white, red and green and mono black. We played black and green, blue and red and white with a splash of blue," Nicolas explains. He admits that the randomness of Sealed Deck annoys him a little. "I was very frustrated when I saw the bad card pool. I've travelled here to get these crappy cards to play with - that's what I felt when I opened the packs," he says.

Nicolas definitely prefers draft to Sealed. "Sealed is a bit random. It's not that random, but more than draft and team draft, which is a real test of skill." Manuel believes that three Sealed Decks are fine though, and he also likes playing in team events. "It's relaxing. You lose, and your team can still win. And you get a lot of free cards from the Sealed Decks!"

Yalta hasn't yet given up on their goal of making top 20. They haven't put the figures together, but assuming that they still have a shot at it, Nicolas believes that they will reach their goal. But they put their faith in another French team, Team Black-Ops. "I hope the Black-Ops wins," Manuel admits. "I don't want an American team to win - ever. And they are not cheaters. There was an article on Mindripper where they were called cheaters, but that is not true. I strongly disliked that."

Finally, the team wants to say hi to Marie-Laure who is at home following the coverage. Antoine also wants to send a greeting to his girlfriend, Geraldine, and Manuel doesn't want to be any worse than the two others, so he says hi to Vanessa. "She is not my girlfriend yet," he admits, "but I hope she will be..."