Team Profiles: Japan and the Netherlands

By Ted Knutson and Scott Johns 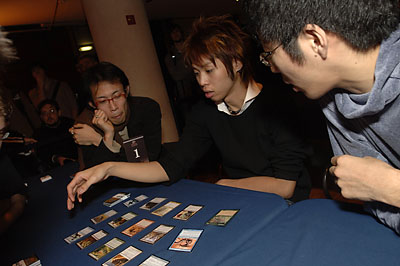 Mori, Shuuhei Yamamoto, and Hidenori Katayama have made history, becoming the second Japanese National Team in a row to make the finals of the Team Competition at the World Championships, and they did it in commanding style, clinching a round early by offering the Dutch an intentional draw when they had them on the ropes already.

The leader of the team was clearly reigning National and World Champion Katsuhiro Mori, who not only played the role of draft general, but also designed both the Standard and Extended decks for the team. Because of their distant home towns (Mori lives in Tokyo, Yamamoto in Hiroshima, and Katayama in Osaka) and school schedules (only Mori is a professional Magic player - the other two are Economics students), practice was apparently impossible. Mori turned to national treasure-Team Rochester guru-former teammate Itaru Ishida on some theories about the format and then made every pick for the team, simply relying on his teammates to pilot the decks well. The strategy was apparently extremely effective, and the team promised to share it with us after Sunday's showdown.

When asked what it means to again take the Japanese flag to the final table in the Team Competition, Katayama described the experience as a dream, and could hardly think of what to say. He noted that he probably won't even realize what they have done at this tournament until he's back home in his bed and the experience has had time to properly sink in.

Mori was very confident that, despite the respect they accorded to the impressive resumes and players on the Netherlands, Japan would take home a trophy in this competition for the second year in a row. He also hopes that he is in for a long day Sunday, because although the team draft doesn't start until after lunch, Katsu's workday will begin at 9 a.m. in the quarterfinals, and he hopes that it won't be done until his hands can wrap around both the team title and a second World Championship in a row. 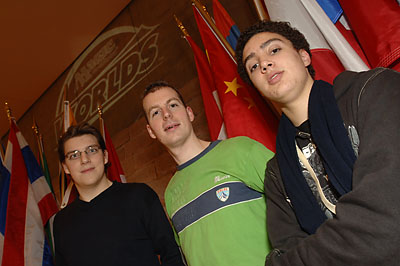 year in the build-up to Worlds, Pro Tour fans watch the summer Nationals scene for the hottest new decks and also to see the caliber of national teams that come out over the course of the season. This year several teams looked promising coming in, but the Dutch team (along with Japan) seemed to be showing up on just about everyone's prediction list for Sunday. Powered by two Pro Tour powerhouses in Kamiel Cornelissen and former World Champion Julien Nuijten, between them they have six Pro Tour Top 8s, a Pro Tour and Worlds title, and over $270,000 in winnings. They are joined by Robert Van Medevoort, a player most will not have heard of compared to his celebrity teammates. But when I asked other players that knew him their opinion, the words offered were complimentary. Having played in just a handful of Pro Tours so far, Robert's just getting his Pro Tour path started, but the players that knew him or had seen him play said that he had natural talent and good perception for how the game works. Watching him in the finals he was cool and collected, looking right at home playing next to his celebrity teammates. So for all you've heard about Julien and Kamiel don't discount Van Medevoort, who definitely did his part by finishing just one win behind each of his teammates.

Once they had clinched their Sunday spot, the players revealed a clear excitement about getting a shot at the title. For Julien and Kamiel it may have meant even more, as both had played on the Dutch team before but come up short. During the Swiss, all of the players felt most confident in the Booster Draft format, having played the format quite a bit already thanks to Pro Tour-Kobe and two Grand Prix events. That confidence was well-founded, as the team put up an outstanding combined record of 14-4 in the format, as well as winning all three Team Rochester matches they completed. So, confident in their draft skills, they were able to focus their practice at Julien's house almost exclusively on Constructed, in addition to four or five practice Rochester Drafts.

Beginning Saturday back in 7th place, they shot up the standings to second after winning their first two matches. In the next-to-final round of team Swiss competition they were paired against the tournament-leading Japanese team. As the match progressed it wasn't clear how it would turn out, and the Japanese didn't want to risk a loss that could potentially knock them out of contention. So it was at that point that the Dutch were offered a draw from the Japanese (with the statement "we'll see you on Sunday"), which they accepted.

With their destiny in their own hands and needing a win in the final round to make the finals, they soundly defeated the Portuguese team in what would turn out to be a 3-0 sweep, setting the stage for a heavyweight showdown that's been months in the making.