Team Round 1: Argentina vs. Germany 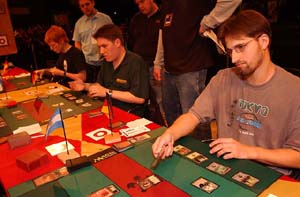 The first-place team after three days of individual play is not the US, not Kai Budde's Germany, and not the superstar-riddled Dutch team, but is instead the unheralded Argentineans, led by Diego Ostrovich. Ostrovich finished the individual part of the tournament in first place, and his two teammates Gabriel Michelena and Gabriel Caligaris did well enough to make that hold up.

Their opponent's in the first round of team Rochester are the Germans, led not by Kai Budde, but rather by Mark Zeigner, who will be joining Ostrovich in the Top 8 on Sunday. Zeigner will be handing over the reins to Kai on this day, however, as Kai knows this format better than any player in this tournament, having won the last team draft Pro Tour as a member of the Phoenix Foundation.

Read about the draft here.

Ostrovich was running a black/red heavy removal deck, and Zeigner had black/green with many large creatures and two Faceless Butchers.

Zeigner cast Mesmeric Fiend on turn two and saw that Ostrovich had three removal spells, a Petravark, and a Zombie Assassin. He chose Firebolt, leaving Toxic Stench and Fiery Temper. Zeigner played out a Phantom Tiger and a Nullmage Advocate over the next two turns and brought the beats. Ostrovich started using his removal, Tempering the Advocate and casting Afflict on the Fiend. Two turns later, he got a two for one on a Zombie Assassin, killing a Phantom Tiger and a Harvester Druid, but he was down in the life race 18-8.

Zeigner put out an Earsplitting Rats that was giving Ostrovich fits, since none of his creatures had three toughness. Ostrovich took hits down to 2 life, but was building up his attack force of Petravark, Dwarven Driller, Organ Grinder, and y Cur. But prior to bringing the team, he decided to cast Last Rites.

Zeigner responded with a Beast Attack, which would have been game over had Ostrovich attacked with the y Cur. Regardless, the Rats and the 4/4 token—joined by its twin on the following turn—were too much for Ostrovich.

Game 2 was a game of Magic chicken. Zeigner's opening hand contained a bunch of land, a couple small creatures, and a Gorilla Titan. Knowing that all of Ostrovich's removal was geared at stopping smaller men, Zeigner decided to slow-roll the 8/8 Titan and not play any other creatures.

Ostrovich's first play was a Zombie Assassin the turn before the Titan came down. Unable to attack with the Assassin, Ostrovich instead enchanted it with Arcane Teachings.

Zeigner swung for 8 and passed. Ostrovich pinged Zeigner for one, and then Lava Darted him for one as well, untapped, attacked for five, then cast and flashed back Firebolt on Zeigner. 12-9 Ostrovich.

Zeigner attacked for 8 again and debated whether to play another creature, potentially allowing Ostrovich to kill it and shrink the Titan. He sat for a long time and tried to recall the contents of Ostrovich's deck to see if it was worth not playing a blocker. He decided to risk it and passed. 9-4 Zeigner.

Ostrovich attacked for five, flashed back the Lava Dart, and used a Sonic Seizure for the remaining three points. A perfectly played game for Ostrovich.

The third game started with a flurry of creatures and removal on both sides, including a Mutilate by Ostrovich that killed Zeigner's Faceless Butcher, freeing a Petravark. Ostrovich was winning the damage race with a Soul Scourge until Zeigner drew his second Butcher. The butcher died to a Thermal Blast, freeing the Scourge which traded with a thresholded Putrid Imp. Zombie Assassin took down a Phantom Tiger, and suddenly the board was empty. Neither play had any spells in hand, and the life totals were 9 for Zeigner and 1 for Ostrovich.

Ostrovich drew the first spell, a 2/5 Pitchstone Wall. Zeigner immediately drew a trump, the 5/5 Masked Gorgon, but a topdecked Arcane Teachings gave the Wall the necessary toughness boost, and put Zeigner on a clock. Zeigner's deck cooperated, coughing up Gorilla Titan and then Morgue Theft (which retrieved a Faceless Butcher), giving Germany the first match. 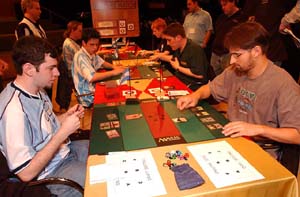 Gabriel was on the offensive in the first game; his shaky manabase cooperated enough to give him a Vigilant Sentry and a Soul Scourge. Felix was swinging back with an Elephant Guided Pardic Arsonist and a Barbarian Lunatic.

At one point Gabriel decided to block the Lunatic with the Sentry, allowing Felix to 2-for-1 him by throwing it at the Soul Scourge. But Gabriel was ready for such an obvious play, and used Embolden to keep both of his creatures alive.

The Soul Scourge kept attacking in the air, and Felix could never use his Fiery Temper to kill it thanks to the Embolden in Gabriel's graveyard.

Gabriel got another fortunate mana draw in Game 2, playing two plains, a forest, a swamp, and a Nantuko Monastery on his first five turns. He played out a Vigilant Sentry and a Nomad Decoy.

Felix put out a Nantuko Calmer and a Nantuko Disciple and started attacking, but his Fiery Temper attempt at the Nomad Decoy was countered via Shelter.

Gabriel then showed off some "tech," casting Buried Alive to put Genesis and two other creatures in his graveyard. While that made for a nice long-game plan, the immediate benefit was putting him closer to threshold. He then played a Hypochondria, which when destroyed by the Nantuko Calmer, put his graveyard to the magic number 7, boosting his Decoy, Sentry, and Monastery. The Monastery was sneaking in hits here and there thanks to the cover provided by the Sentry.

The board began to clutter as Felix played out a Basking Rootwalla with Arcane Teachings and a Gorilla Titan, and Gabriel played a Shieldmage Advocate.

Felix was looking for a chink in Gabriel's armor when he drew Temporary Insanity. He tapped four lands, and then tried to gain control of the Vigilant Sentry. Unfortunately, he had only three cards in his graveyard, and the Sentry was 3/3. With four mana in his pool, he had no real option other than to choose a new target, this time the Advocate. A costly error.

At only seven life, Felix could only watch as Gabriel animated his Monastery, cast Shelter #2 to give it protection from green, pump it with the Sentry and send it in for seven. 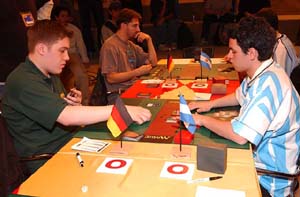 So it would all come down to this – Gabriel Michelena vs. Kai Budde. Michelena has an aggressive blue/green deck, and Kai played blue/white splashing red for Arcane Teachings.

Kai kept an opening hand of four white cards, a Stupefying Touch, and two Islands, but lucked into a plains on his second draw phase, allowing him to play Patrol Hound.

Michelena had put out an Aquamoeba and a Phantom Tiger, and killed the Hound with a Sudden Strength when it blocked the 1/3.

Kai built a monster play putting Arcane Teachings on Major Teroh and started swinging in the air. Michelena made his own basher with Elephant Guide on a Possessed Centaur, but Kai had a Cagemail for it, taking away its ability to attack. Kai was still taking hits from the Tiger, however, and didn't stabilize with a Resilient Wandered until he was at around 6 life.

Michelena played and used a Hapless Researcher to find a sixth land and said go. "Finally enough lands for the Warthogs, eh?" asked Kai. Michelena then played the 5/5 Hog on his next turn and took the Teroh attack, going down to dangerously low life.

Kai had since found a Circular Logic with his Compulsion, and discarded it to his Resilient Wanderer to counter the Ghostly Wings Michelena attempted to play on his Warthog. But Michelena was ready, casting Rites of Refusal with a little bit of a confident flourish, and Kai fell to the flying Hog.

Both players came out quickly in Game 2, Michelena with an Elephant Guided Aquamoeba and Kai with a Hallowed Healer followed by a Battle Screech with flashback. Kai added a few more fliers to the board and was staying ahead in the life race by carefully chump-blocking the Aquamoeba when he could afford to.

Michelena had the Warthog again, which looked like it might decide the race, but Kai was sitting pretty on Prismatic Strands, and the bird tokens did Michelena in.

As time started running out, Game 3—the one for all the marbles—started grinding to a halt. Michelena had out a Ghostly Wings'd Aquamoeba, a Phantom Tiger, and a Cephalid Looter to Kai's Aven Flock, Hallowed Healer, Trained Pronghorn and Major Teroh. The Aquamoeba was playing some serious "D." 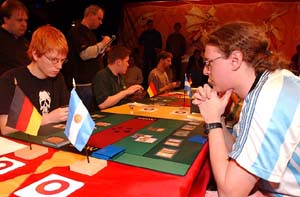 Michelena played his Warthog again, but Kai had a Cagemail for it. A Stupefying Touch shut down the Looter, and no one was going anywhere. Kai started to get frustrated at Michelena's pace of play, and judges started watching to make sure there was no stalling going on.

Michelena weighed all his options before casting Acorn Harvest twice and passing the turn. Kai's teammate Mark Zeigner threw up his hands in outrage over the length of Michelena's turns. The Netherlands' Noah Boeken jumped to Michelena's defense from the audience.

"You take four minutes for your turns," said Boeken to Zeigner.
"I finished on time," said Zeigner.
"That doesn't matter," retorted Boeken, "He plays at the same speed."

Kai played out a Skywing Aven and started attacking with all his flyers. In all the confusion, Michelena forgot to block one of them with his Aquamoeba, and also forgot to flash back the Howling Gale in his graveyard to keep the Aven at bay for an extra turn. Michelena attempted at alpha strike right at the end of the game, but Kai had the Strands again, taking the match for Germany.

It didn't look like Michelena was trying to stall, but the pressure of the moment surely got to him. If he made the correct blocks, he may have been able to stay alive until time ran out, giving the teams a draw.