Team Round 2: Tilting at Windmills 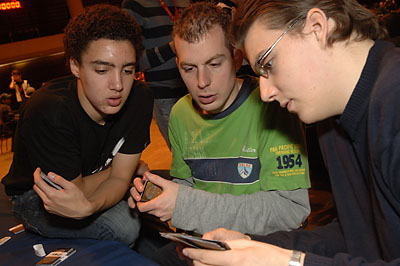 very interesting teams square off for our feature match this round. Coming into the week the Dutch were clearly one of the favorites in the team competition, and their chances seemed even better when Germany went tumbling from the standings on the back of a pair of disqualifications. However, in spite of a roster containing former World Champion Julien Nuijten and likely future Hall of Famer Kamiel Cornelissen, their individual performance left something to be desired. Then came their opening match against Argentina, which was contentious to say the least. Numerous judge calls, much trash talking, and heated gestures were exchanged, but the Dutch pulled that one out, and it looks like that match might have been enough to light a fire under them - one they are hoping will propel them into the team finals on Sunday.

Facing the Dutch this round are the surprising Chinese. It seems like we say this every year, but in spite of a small player base and difficult travel arrangements, the Chinese have put up solid Worlds performances recently, and this week has been no different. They even managed in the first round to defeat a scrappy American team, who were looking at Team Limited as one of their better formats. The Chinese National Champion is downright charismatic, and his teammates appear to be very loose in their play, generally enjoying the experience and winning in general.

The draft this time did not go that well for the Dutch, in that they got heavily out-opened. Tromp the Domains, a number of Rebels and rebel searchers, Desolation Giant, and Sacred Mesa all ended up in Chinese decks, while the Dutch were forced to make do with reasonable cards, but few bombs. The Dutch were obviously not that happy with how their decks turned out during the build period, but they remained upbeat about their chances, perhaps owing to the natural self-confidence one builds from winning at Magic over all those years. The Chinese were pleased, though not ecstatic, about their decks, and were cautiously optimistic about their chances. They felt that Mai's red-white deck had a strong matchup against van Medevoort's green-red but that Wu would have a tough blue battle in the center, and they were worried about the amount of removal Nuijten's black-red deck could bring to bear against Long's black-green. 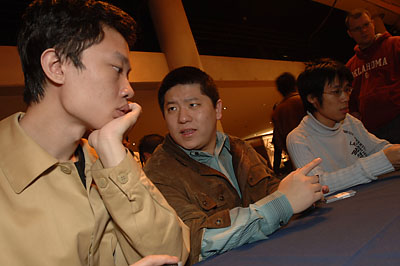 Julien's match started the exact opposite of what he hoped. He was already playing an Ancient Grudge in his maindeck because that was the only way he could deal with Weatherseed Totem, and then his opponent played a turn-three Totem. Thankfully, the former World Champion had the Grudge in hand to get rid of it before it became a problem. Welcome to Rochester Draft, where you get to pre-sideboard because you know all the cards in your opponent's deck. Lightning Axe and a madnessed Gorgon Recluse then put Julien way in the lead.

The middle seat was going equally well for the Dutch, with Kamiel tossing a Griffin Guide onto Errant Doomsayers on turn three, challenging his opponent to find an answer, and quickly. While these two matches were rolling apace (okay, in Kamiel's case it was more strolling, and getting closer to a hobble really), Mai and his excellent rebels were under siege from van Medevoort, making it look like the Dutch might all start out 1-0. 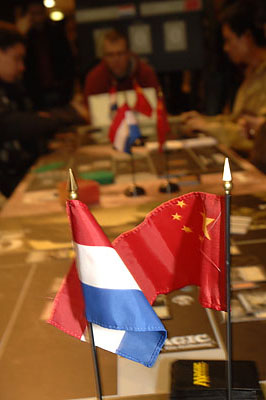 Julien and Kamiel both locked up their games, but their momentum ebbed a little when Nuijten had to double mulligan to start the second game, while Kamiel missed his third land drop. Mana screw from Long kept Julien in it, but Kamiel was flattened by Pulmonic Sliver and Castle Raptors, evening the middle match at a game apiece. Van Medevoort flashed a smile to Kamiel as he was packing up his cards, signaling that he had finally managed to take down Mai in Game 1, despite heavy rebel resistance and an appearance from Desolation Giant. On the other side of Kamiel, Nuijten's five-card hand turned out to be nuts - more than enough to overcome a slow start and manascrew from Long - and the Dutch were now up a match and cruising. In a game much faster than the first, van Medevoort cast a turn-four Flamecore Elemental against a slow draw from Mai and smashed him, giving the Dutch a surprisingly easy win in what looked like a dogfight coming out of the draft. Apparently the way to beat rebel decks in Team Limited is to pile on the pressure early and never let it stop.

The Dutch had won the match, but Wu carried on for Chinese pride and tiebreaker points, and a major flood of land Kamiel and cautious aggression from Wu gave the Dutch merely a 2-1 win.