Team Round 3: A Clean Sweep

Hong Kong (77) and the United States (76) came into round three of the team competition nipping at the heels of leaders Netherlands and Denmark, who each had 78 points. Whoever won this match would certainly slide into second. 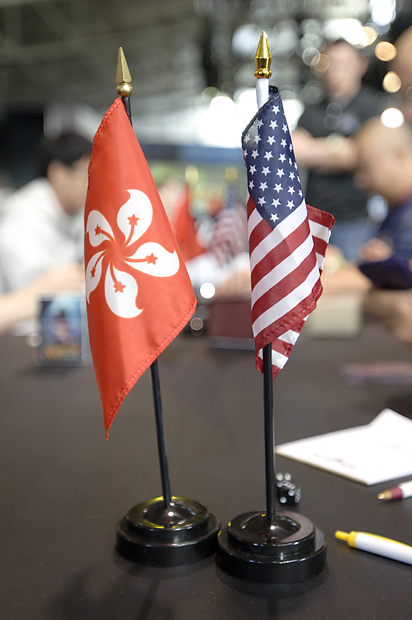 Both Hong Kong and the United States were chomping on the heels of Netherlands and Denmark in points. Who would push themselves closer to Sunday competition with a win in this round?

The Americans had universally chosen blue and white-based control decks across each format, while Team Hong Kong opted for a vastly different set of decks.

The Unite States found itself in a quick hole as Wild Nacatl and Kird Ape plus two Lightning Bolts and a Lightning Helix made short work of Aintrazi's slow but powerful Tron deck in game one of Modern.

Hu and Lee had a relatively quick first game as well. A Hero of Bladehold made an early appearance and just as quick an exit thanks to Doom Blade, but Hu struggled to keep up as Garruk Relentless and Elspeth Tirel spat out token after token. Hu found a Day of Judgment and a Grave Titan, but more planeswalkers allowed a mass of tokens to swarm around even the Zombie Giant.

And like that, the United States found itself down 1-0 in both Standard and Modern.

In the middle, Ochoa wasn't faring much better. Dredge typically has a strong game one as few maindeckable cards deal with the graveyard menace, and Ochoa's Blue-White list wasn't set up well against Dredge pre-board. It took Lam several Careful Studies and multiple Dredges to get going, but two Ichorids and three Bridge from Belows paired with some Cabal Therapies to make six tokens and clear out Ochoa's hand of any action. A few Dredges later and Ochoa joined his teammates down a game to a powerful Hong Kong team. 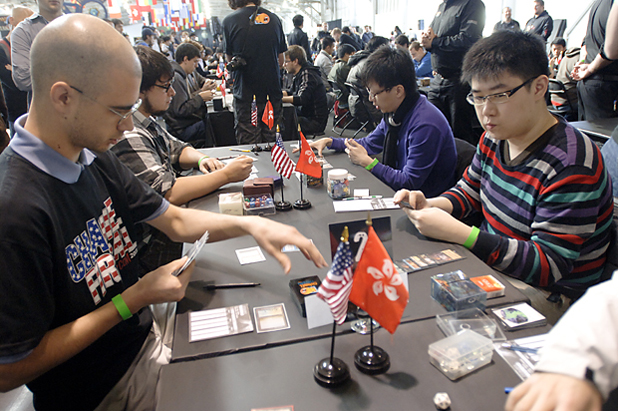 Hong Kong took command early. Can the USA Team battle its way back?

Back at the Modern matchup, Aintrazi's sideboard was proving its worth. A third turn Ghostly Prison gave him some breathing room against Qui's menagerie, and a Timely Reinforcements made life even more difficult. Qui was building up a formidable army, including a potentially important Gaddock Teeg, but a misunderstanding of Ghostly Prison left him paying three mana per attacker instead of two. And since leftover mana no longer causes mana burn, the mistake continued all game.

To be fair, even with a proper reading, it was unlikely Qui could have put much of a dent in Aintrazi's lfe total. A Thirst for Knowledge left the American's hand with Wrath of God, Day of Judgment, Path to Exile, Sundering Titan and Martial Coup, the latter of which he cast for five to reverse the board situation. Qui made a game of it with Ranger of Eos for two Wild Nacatls plus another Nacatl and a Kird Ape, but Sundering Titan plus a Day of Judgment destroyed six of Qui's lands and left him on fumes.

It seemed like the Americans might turn it around at that point. Ochoa used a Swords to Plowshares on a Putrid Imp and a Purify the Grave to remove Lam's only Dredger. That bought him enough time to land a Jace, the Mind Sculptor as Ochoa begin Fatesealing his way to victory. At one point, the Dredge player had four lands in play, a rare sight for the deck. 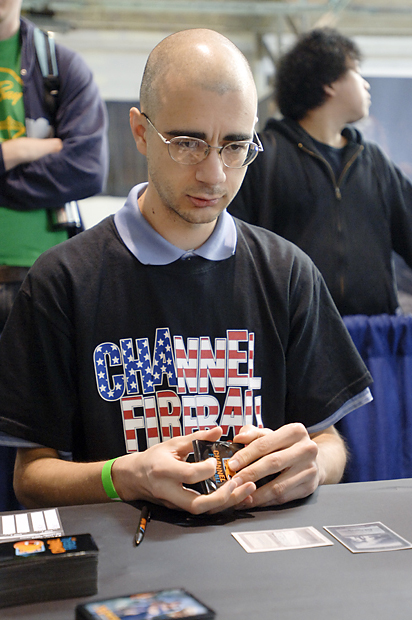 David Ochoa: Swords to Plowshares this, Path to Exile that, Snapcaster and do it again.

While Ochoa stabilized and Lam looked for a way to kickstart his engine, Lee's tokens and Gavony Township were making life difficult for Hu in Standard. Birds of Paradise got as large as 3/4, and a Garruk Relentless was spitting out wolf tokens. Hu made some tokens of his own with Timely Reinforcements and a Grave Titan, but Oblivion Ring removed the Titan and Lee's tokens were simply bigger than Hu's. Lee even had an Oblivion Ring for the Titan a second time when Hu's own Ring had freed it from the first (follow that?).

Back in the center table, Lam resolved a Careful Study that dumped two Golgari Grave-Trolls in the graveyard, finally allowing him to dredge into a Narcomoeba and a Bridge from Below, perking him up noticeably. Cephalid Coliseum netted him more Grave-Trolls and dredged a significant portion of his deck. Ending his turn with three zombies and a Narbomoeba in play left him in a much better position suddenly.

Meanwhile, Hu had been forced to clear the table with Day of Judgment and was able to counter a Geist-Honored Monk, but two Avacyn's Pilgrims and a Mirran Crusader backed by two Gavony Township put Hong Kong up one match over the Americans. 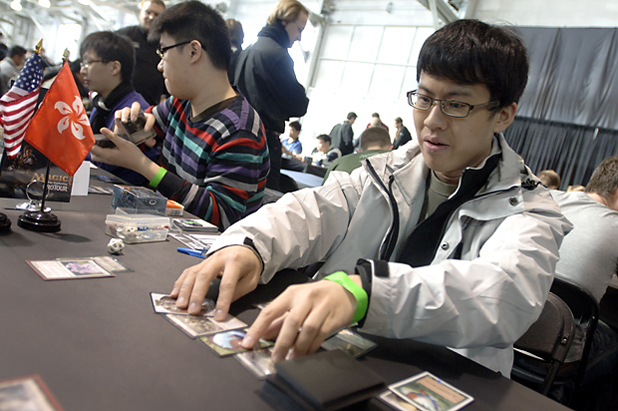 Yu Yeung Lee probably has somewhere between 87 and 159 creatures in play right now.
Give or take.

Aintrazi was in trouble as well. His turn-one Engineered Exposives had been hit by Ancient Grudge, and a Kird Ape and Tarmogoyf were beating their way through even two Timely Reinforcements. When the second set of Reinforcements went to trade with a Treetop Village, Qui had a Path to Exile to remove one and play around the Condescend Aintrazi had mana up for. With no sweepers or removal in sight, Aintrazi died despite gaining 12 extra life and making six blockers.

Even though Hong Kong had officially won the match with wins in Modern and Standard, Ochoa and Lam still were working through their second game. Lam had a bunch of tokens, but couldn't attack into Ochoa's Snapcaster Mage and Mutavaults for fear of losing his four, yes four, Bridge from Belows in his graveyard. On 11 tokens, Lam attempted to Dread Return a Flame-Kin Zealot, but Snapcaster Mage for Flusterstorm stopped it dead. An attack finally killed all the Bridge from Belows and a Wrath of God left Lam with no way to win before he decked.

Game three was a quick affair as time was running out. Lam was able to resolve a Dread Return on Iona, Shield of Emeria in relatively short order, naming white, and killed Ochoa in extra turns.

2 Mortarpod 2 Sword of War and Peace

4 Force of Will 2 Batterskull
51 Cards