Team Round 4: Argentina vs. Denmark 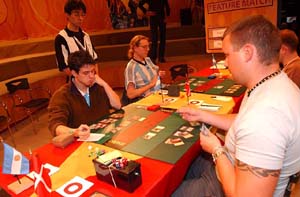 The Argentinean team is riding high this weekend. Captain Diego Ostrovich is in the Top 8 of the singles competition, and now they are just a match win away from an appearance in the Team Finals as well. They, along with Top 8 competitor Carlos Romao of Brazil, are the symbol of the rise in skill among the Latin American pro community.

The Danish team is surprising everyone, surging past a lot of powerhouse teams to find themselves in contention for the second spot.

Denmark, if they win, will be at the mercy of the U.S. Team. If the U.S. wins, Denmark and the U.S. will be tied for second place behind Germany, and they will have to play off for the spot in the finals. The Danes were clearly excited to find themselves to close to the big dance. Argentina, by contrast, seemed nervous.

In the first seat, Allan Christensen of Denmark had a brutal opening against Diego Ostrovich of Argentina. Crippling Fatigue took out y Cur and Cabal Torturer, clearing the way for two Halberdiers and a Whispering Shade, perhaps the key card in this matchup. Ostrovich brought out Crypt Creeper, Barbarian Outcast and Soul Scourge, threatening to race. Patriarch's Desire on the second Halberdier made that happen, and suddenly Christiensen was at six, unable to mount a lethal counterattack. It was going to be close.

In the middle seat, Denmark's Jonas Cleeman had traded his Benevolent Bodyguard for Gabriel Michelena's Seton Scout, clearing the way for an air force of Battlewise Aven and Cloudchaser Aven. Michelena battled back with Gorilla Titan and Arrogant Wurm.

In the final seat Gabriel Caligaris of Argentina had his quick start of Phantom Nomad and Hallowed Healer slowed slightly by Peter Laier's Aven Fogbringer. He dropped Psionic Gift to take it down. Laier used his now-useless Druid Lyrist from hand to enable a Wormfang Drake, a reprieve from Caligaris's attackers.

Back in the first match Christiensen counterattacked, leaving Ostrovich at 5. He played a Petravark and passed it back. Ostrovich had just one card in hand. If it was removal, he would win. He swung with just Scourge and passed it back, signaling that he had nothing. Christensen swung in, and pumped the shade for lethal damage. First blood went to Denmark. 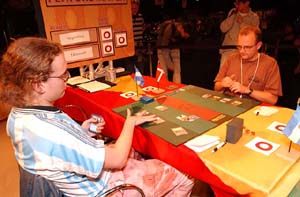 Next door, Cleeman had played the tempo game, using Prismatic Strands to buy two turns of attacks, leaving Michelena at 4. Fortunately, Michelena had Repel to stop the lethal attack. However, he didn't have a permanent answer. At two, he swung in with all his creatures. Cleeman blunted the attack, and swung for the win. You could see the effect of the Danes' advantage on both teams. Denmark's spirits rose and high-fives were exchanged. The Argentineans redoubled their concentration.

The time Laier bought with his Wormfang bore powerful fruit. He had Coral Net to dispatch Hallowed Healer, then Genesis to still the ground, and finally Beast Attack to bring the beats. Caligaris's attempt at Gallantry was stopped by Aether Burst, and then he was forced to use his Second Thoughts on a Beast token. The way was clear for Genesis to attack. Caligaris needed a perpetual blocker, and fast.

In the second game Ostrovich tried to kill Christiensen with speed. Mad Dog, Blazing Salvo and removal for Christiensen's blockers brought him to eleven before Lava Dart and a mountain to re-use it could take the Dog down. Here Christiensen rallied, busting out Soul Scourge and Whispering Shade while Ostrovich managed only a Torturer.

Beside this close race there was a little Odyssey Block Constructed action going on. Cleeman had led with Aquamoeba, but Michelena went one better, discarding Arrogant Wurm to Careful Study and casting it with the help of Harvest Druid. Cleeman turned it back into a limited game with Kirtar's Desire. Possessed Aven started the business of killing, and twin Border Patrols made sure no fat could bust through.

In the far seat. Caligaris had reached threshold, turning on Vigilant Sentry. Some creative blocking had taken down both the beast token and Genesis, somewhat of a mixed blessing. Laier's shortness on mana kept him from recurring Genesis, but he had Wild Mongrel, and then compounded the problem it presented with Exoskeletal Armor. Caligaris needed an answer, fast.

Ostrovich dispatched the Soul Scourge with a flashed-back Engulfing Flames and the Torturer, but couldn't find a way to deal with the Whispering Shade. Two attacks and it was over, with Denmark taking the first match.

Michelena found an answer to the Possessed Aven in Canopy Claws. Unfortunately that wouldn't be enough for Balshan Griffin. He used it to force a bounce. The now-spectating Christensen allowed himself a little laugh. That was quickly stifled by the Rites of Refusal that took care of the Griffin permanently. It had the benefit of turning on Michelena's Krosan Beast.

The struggle at the far table was reaching a fever pitch. Wormfang Crab had given Caligaris a tool to race, but he had run through plenty of chump blockers to find himself just one turn shy of outracing his opponent. He worked to keep blocking, but it seemed like even if he could outlast his opponent he would have Genesis to deal with.

Cleeman was facing the same army of monsters he outraced in Game 1. Again he had Prismatic Strands to make it close, but this time he lacked the air support to push through the final two points. Krosan Beast continued to knock at his door.

The attrition game worked to Laier's advantage, and he eventually ran Caligaris out of blockers, taking the first game. Denmark had four unanswered game wins. 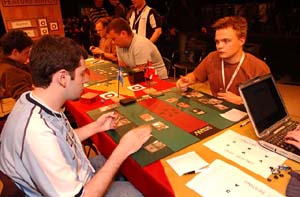 The next game he had a quick start while Caligaris drew unspectacular creatures. He was firmly on the back foot, working his defense as best he could, but four power worth of fliers was making things difficult.

Cleeman finally found a Benevolent Bodyguard to let his Skywing Aven past Michelena's thresholded Seton's Scout, looking to deal the final two points. Michelena played Alter Reality before blockers. Cleeman informed him that he could not. Michelena argued that he had made the same play on Magic Online. Head Judge Collin Jackson was consulted, who then contacted Rules Manager Paul Barclay. It turns out that Michelena had, in fact, found a bug in Magic Online. Cards that alter other cards' text can only affect the text printed on the card. Abilities, though granted, do not actually get "written down". This was small comfort to Michelena.

It was also small comfort that Laier managed to push past Caligaris's defenses to play Sudden Strength, giving Denmark the match win despite Michelena's unfortunate misinformation.