Team Round 4: Brazil vs. Finland 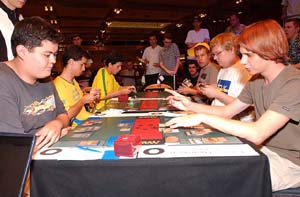 Yesterday, Carlos Romao assumed that he was a lock for Top 8, only to find out that Tuomo Nieminen refused to draw. Nieminen was already guaranteed a spot on Sunday, and wanted to play out the match to get the Finnish team another match win. Nieminen won, denying Romao the chance to play for back-to-back world championships.

However, the story doesn't end there. About 24 hours later, the Brazilian National Team played against the Finnish team. This time, Finland was a lock for the finals tomorrow, and even though Brazil couldn't make the finals, Romao needed the win to clinch a spot in the Magic Invitational. Once again, he was denied. The Finns want to help out their friends from Norway and England, whose national champion is from Finland. So, Brazil was forced to play, and Romao needed the win to get the Pro Tour points necessary to attend the Invitational once again. If Brazil lost, there was potential for the slot to be decided by a ratings tiebreaker between Romao and Barbero.

Both players had two-drops, as Nieminen's Stoic Champion was matched by Skirk Drill-Sergeant. The Champion attacked and was blocked, causing a trade. This was followed by a morph on each side, and Nieminen summoned Cloudreach Cavalry. Romao's morph attacked, and he played Smokespew Invoker. Nieminen untapped and said go, staying back on five mana and a morph. Romao's morph flipped over to reveal Skirk Marauder, killing the Cavalry, and Clutch of Undeath killed the morph, which flipped over to reveal Frontline Strategist, nullifying Romao's attack for the turn.

Nieminen played a seventh land, and still had nothing to play. Romao landcycled Chartooth Cougar, and played Flamewave Invoker. It died in combat, and Torrent of Fire killed the Smokespew, while Romao had seven lands and wouldn't get an activation out of it. Aven Liberator came out, and was enchanted by Crown of Awe. Romao had Twisted Abomination, a morph and Undead Gladiator, and Nieminen played Daru Warchief. Despite the fact that Nieminen was beginning to stabilize, Romao had Crested Craghorn to force through lethal damage in time.

Meanwhile, Vieira's turn four Forgotten Ancient carried the Brazilian champion to victory over Walamies. Motta's air force was taken down by Toikka's Claws of Wirewood, but he had fliers to spare and took the first game. Brazil had swept their first games, and were in good shape. 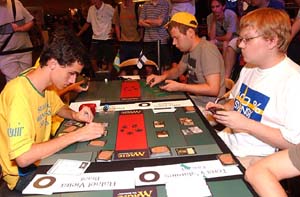 Both players had morphs on turn three, and Nieminen's was enchanted with Crown of Awe. Romao's morph attacked past it for two points of damage, and he continued to play colorless sources of damage with another morph. Nieminen's Daru Warchief came out on defense, but traded with Crested Craghorn right away. Nieminen couldn't block either of Romao's morphs with the Awed one, so he took four and swung back for two. Grassland Crusader came out to block, but fell to Skirk Marauder after combat damage. Nieminen's enchanted creature finally flipped over to reveal Rockshard Elemental, a huge threat that was impossible to deal with since it had protection from Romao's colors.

In Game 2, Motta gained some tempo advantage with Echo Tracer, and enchanted it with Dragon Scales. Toikka accelerated out Krosan Groundshaker with the help of Krosan Drover, and Motta once again went to the air with Shoreline Ranger. Even with Choking Tethers, he couldn't outrace Toikka's monsters on the ground, and their match went to a third game.

Romao mulliganed his opening hand, and kept the next six even though they only contained one land. More lands didn't come in time, and he now had to depend on his teammates to get him into the Invitational.

Motta had a great draw with a ton of fliers- Aven Warhawk, two Mercurial Kites, Aven Farseer, and even Keeper of the Nine Gales active, and doing its thing. From this position, Motta took the third game, and it came down to Walamies and Vieira.

In Game 2, Walamies had a great start, with Coast Watcher, Embalmed Brawler, Mistform Seaswift and Crypt Sliver. Vieira didn't have much going, and it seemed that the match would go to a third and deciding game. Walamies turned to Romao, and told him that if he wanted a concession, he should look to see how England and Norway were doing. If both of those teams lost, Finland's win wouldn't do anything to help them, and they would concede. Romao left the table to go find them, and Vieira lost the second game. He came back as Walamies and Vieira were shuffling up for Game 3, and told them that neither team was close to finishing. 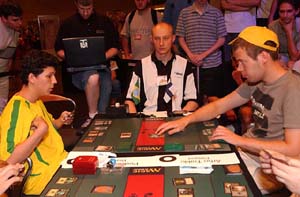 Walamies wanted to send greetings to Norway and Poland. In particular, Poland let the Finns borrow many of their cards for the tournament this weekend.

Romao watched Vieira mulligan his hand, and could only be a spectator, as his fate would be decided by one game being played by someone else.

Walamies opened strong with Imagecrafter, Crypt Sliver and a morph, while Vieira had Stonewood Invoker. Vieira cycled Krosan Tusker, but had no plays on turns four and five despite not missing a land drop. Walamies played another morph, followed by Unspeakable Symbol, as his board position continued to improve. Vieira finally put up some resistance with Timberwatch Elf, but was far behind. He took another attack on the chin, going down to twelve, and Walamies summoned Covert Operative. Turn seven came, and Vieira still had nothing. Even Timberwatch Elf didn't stop Walamies' offense, since the Finn could simply make a dying creature into a Sliver, and regenerate it. Vieira played an island, cast Rush of Knowledge to draw three cards, and enchanted Covert Operative with Lingering Death. Walamies unmorphed Skinthinner on end step to kill the Timberwatch, and attacked for the win.