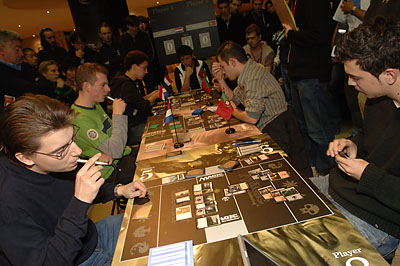 Only one of these teams would get to advance to the finals.

with a win!" Julien Nuijten told me after their draft with a nervous smile. Things didn't seem to have gone as well for the Dutch during the draft as they would have liked. Once they got wind of where Portugal were going with their colors they were forced to shuffle theirs about to ensure they would still have a chance to, as the previous World Champ so succinctly put it, be "in with a win." Despite their successful maneuverings within the color tree, many of the picks still landed in favor of the Portuguese. Joao Martins ending up with a pair of Sulfurous Blasts perfectly capable of tearing Robert Van Medevoort's table apart. Kuniyoshi Ishii had no less than four (okay, exactly four) Cloudchaser Kestrels as the basis of a formidable airforce and Paulo Carvalho had, well… Okay, Carvalho's deck didn't seem nearly as powerful as those piloted by his teammates, but Nuijten felt his deck needed more Penumbra Spiders than the zero he ended up with if he was to shut out Carvalho's Green/Black army.

On the other hand, the Portuguese were confident in their draft and decks, which Carvalho summed up simply by saying "Yeah, we can do it." 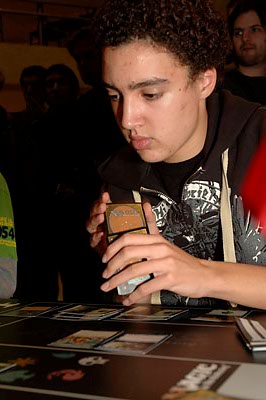 Former World Champion Nuijten was the first to strike for the Dutch.

The crowds closed in on the feature match area as the final round of team play got underway. Portugal pressed forward on all three fronts, letting the Dutch know how it was going to be. Van Medevoort was the first to retaliate by mustering an airforce of his own to face Martins' Undying Rage-fueled assault. A Fortify helped Van Medevoort begin to stabilize, but Martins simply played out a Dauthi Slayer and reapplied the Undying Rage to be the first in the match to finish a game. Nuijten pulled up the right flank to even up the scores by throwing his large green men over the top of Carvalho's slightly smaller Syphon Mage and Wormwood Dryad, who were on the verge of finishing things to the contrary. True to form, Kamiel Corneilissen was holding off Ishii's Unstable Mutationed Lightning Angel in the middle, biding his time while the old-school aura ate away at the three-color flyer. Once the coast was clear, Corneilissen utilized the classic fly over the top and then Conflagrate the face play to take the game in his favor.

Carvalho slammed back at Nuijten in the second with a Strength of Numbers off and over the top to even his match up at one a piece, and again the Dutch evened out the flank as Martins walked a Sulfurous Blast right into Van Medevoort's Fortify. In contrast, the middle began to clutter up as flyers on both sides pulled back to establish some semblance of defense for their respective controllers who were now both sitting dangerously on single figure life totals. Ishii's army looked to be the better one, featuring a Lightning Angel and an Errant Ephemeron, but he couldn't ignore the fact that Corneilissen was working on a Greater Gargadon that was ripe to hatch at any moment. 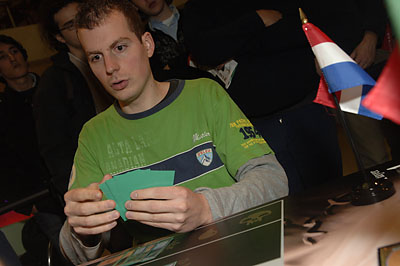 Kamiel was ready to find a way somehow.

Nuijten was the first to break the seal on the match when his Ixidron flattened out the playing field, being quickly followed up with a pair of flyers to take Game 3 of their match. Things had slowed up dramatically in the last game for Van Medevoort and Martins, as Head Judge Jason Ness began to ask some serious questions regarding a misplay on Martins' part. Back in the middle, Ishii was close to threatening the kill with his Lightning Angel. Suddenly Corneilissen flipped up his Vesuvan Shapeshifter and blocked the incoming Angel with a mirror image of the aggressor. He then flipped it back down during his upkeep and promptly duplicated his Looter il-Kor to sneak through for the win, all the while sitting at a precarious one life. The Netherlands will now go through to face the Japanese Powerhouse on the final stage tomorrow.