Team Semifinals: Wink of an Eye

“Have you tested?” Lucas Blohon asked his opponent as they shuffled for their Team Semifinals match.

“Yes. All night long,” Benedikt Klauser replied before adding “We’re ready for you!”

Klauser was arguably the biggest name at the table, but the well-respected Austrian faced a challenge from his opponent, the Czech Republic’s Lucas Blohon. They would be battling Standard. 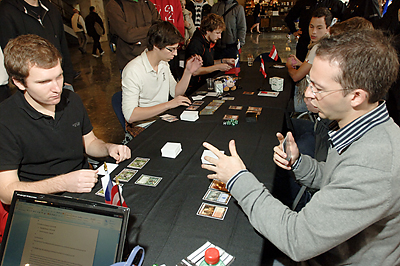 Blohon got things underway for the Czechs by casting a Borderland Ranger to find himself a land while Benedikt Klauser built up his red-white-blue mana base, patiently waiting for his chance to take over the game. Lucas went on the warpath with Noble Hierarch before casting a second Borderland Ranger.

In addition to the twin Rangers for team Czech, Lucas Blohon had also managed a Noble Hierarch and between the three mana-advantage creatures, Lucas had managed to land a Baneslayer Angel. From his opponent’s side of the table, only a Jace Beleren, who dutifully drew his master an additional card to help him catch up. The 5/5 Angel was a menacing powerhouse in Standard, but it underwhelmed in the first attack, simply crashing in to steal the final two loyalty counters from Klauser’s Jace.

The Baneslayer Angel switched paths after munching the planeswalker, turning its sights on Klauser himself. Each turn, 5 points bled from the Austrian’s life total while his opponent accrued chunks in the same amount. Soon the totals were 18-8 with the Czech Republic in the lead, and Klauser was forced to cast Day of Judgment.

Lacking a better plan, Lucas Blohon started going back to town with a post-Day Noble Hierarch, his second of the match. The 0/1—1/2 in combat—heroically marched Klauser closer and closer to death before its controller tried to add on by casting an Elspeth, Knight-Errant. Blohon had managed to maintain momentum, but it didn’t matter. The other two matches were already over ....

Benjamin Rozhon was playing the powerful Legacy combo deck known as Ad Nauseam Tendrils. The deck sought to combo off by casting Ad Nauseam, fueling its caster’s hand with cheap ritual effects and zero-cost artifacts and ultimately ending the game by powering out a lethal Tendrils of Agony. That’s exactly what happened, and on the first turn in the first game for Rozhon, who had double Dark Ritual to cast the Ad Nauseam against a shocked Jan Kotrla. It netted him triple Lotus Petal, a Chrome Mox, Ponders, Cabal Rituals, and the Mystical Tutor he needed to search up the Tendrils. Three minutes into the match, and Austria had a one game lead!

For the second game, the two players moved a bit more slowly. Jan Kotrla was able to build up his mana base, but not until after Benjamin Rozhon tried to get going early, using a Dark Ritual to power Duress to see his opponent had boarded in Orim’s Chant and was sitting on two copies of the card. With two mana left over he cast Dark Confidant. The 2/1 would help fuel his hand into lots of combo goodies, but he’d need to deal with the Chants before trying to go off.

Sensei’s Divining Top comboed with Rozhon’s Confidant, which begin beating down while sculpting the perfect hand. He was putting a two-part plan to press against Jan Kotrla, who needed to deal with the creature on the battlefield while Rozhon built the hand to take advantage after, forcing his opponent to then deal with him going off.

Benjamin tried to force through a mini-Tendrils of Agony by casting Cabal Ritual, but Kotrla pulled the trigger on Orim’s Chant in response, rendering the Torment common effectless. The Austrian Rozhon simply pressed on with his combo of Sensei’s Divining Top and Dark Confidant, a powerful Plan B for combo decks dating back to Steve Sadin’s win with Flash Hulk at Grand Prix-Columbus.

Plan B soon became Plan A as Jan Kotrla stuck Benjamin Rozhon with an Extirpate targeting his opponent’s Tendrils of Agony. The powerful play left Rozhon hoping to outlast the Czech pro with his Dark Confidant, but somehow the 2/1 seemed capable of the deed. Turn after turn it marched stoically into the red zone, eating away at Jan Kotrla 2 points at a time. Somehow the Czech player just couldn’t find a solution, wearing his hand down trying to dig for one or a win condition, but shockingly, it wasn’t to be! Team Austria had managed an upset victory in two astounding fashions: on turn one, and with the backup plan!

In the Extended match, Bernhard Lehner’s All-In Red deck had gotten off to a powerful start for Austria. On the second turn he had cast Rite of Flame for Seething Song, then used the mana boost for a Deus of Calamity. His opponent, Lukas Jaklovsky of the Czech Republic, was playing the mirror and matched the play with an Empty the Warrens for six Goblin tokens, in sum total capable of blocking the Deus to death.

The players traded their armies for one another, then shifted to a game of draw-go, Lehner stuck on two Mountains while his opponent Jaklovsky had four. A second Seething Song allowed Lehner to cast Demigod of Revenge, which Lukas answered with a Deus of Calamity of his own. The two were off to a race, one Lehner led thanks to his hasty 5/4. Even though Jan was able to blow up a land from his opponent each turn and attack for 1 additional point, his deck didn’t have room for removal for a hasty flyer. He needed a Demigod of his own to stay in the game, but if he found one would lock his opponent out. He didn’t, and Austria stretched their lead by a game.

After discussing mulligan options for the second game, Lukas Jaklovsky opened on Relic of Progenitus. It was an underwhelming opening against Bernhard Lehner, who plopped a first turn Demigod of Revenge onto the battlefield with Rite of Flame, Simian Spirit Guide, and Seething Song. Jaklovsky was in the same spot he had been in the first game: find his own copy of the 5/4 flyer or lose the match for the Czech Republic.

Instead, Lukas Jaklovsky found a Deus of Calamity, but like the first game, it wasn’t enough. Lehner simply untapped and cast Empty the Warrens for eight Goblins, more than enough to contain the 6/6 while he continued beating down with Demigod of Revenge. A turn later, Jaklovsky was out of options. He extended his hand, giving the set, and thusly the match, to team Austria.

Austria defeats Czech Republic 2–0 and advances to the Finals!