Of all of the ninety-six players playing today, only one of them has a Team Sealed Pro Tour win on his resume: Jelger Wiegersma—long held as one of the most consistent, scary players to face in the history of the game. Facing down the Hall of Famer when this is your first Pro Level event can be even scarier. Yet Nicolas Righetti was all smiles as he sat down across the table. In fact, all of team Uruguay was bright and cheery in their sweet suits and powder blue ties. They couldn't be more excited to be here, and couldn't be happier to get to face one of the Magic players most people want to avoid. It was like David versus Goliath... if David were to ask Goliath for his autograph before spanking him. It was great to watch. 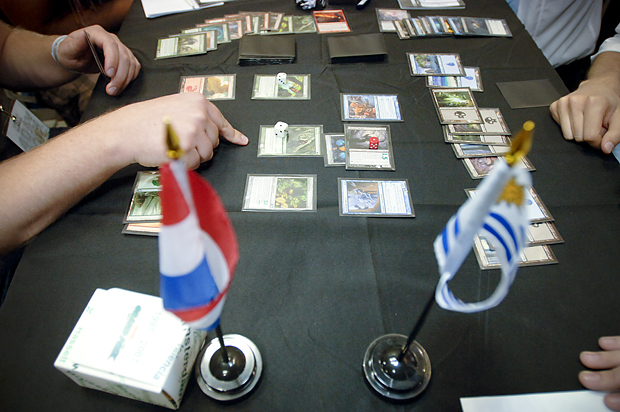 With flags raised, Uruguay and the Netherlands face off on Day Two.

Wiegersma and Righetti started their color-copy central match with a Plains and an Island apiece. Wiegersma was the first on the board, playing a Chronomaton, but Righetti took the advantage with a Wind Drake.

Wiegersma was more than willing to concede the sky to Righetti, choosing to dominate the ground by growing his Chronomaton and making a 3/3 Primal Clay. Righetti started flying over Wiegersma's ground troops for 2 a turn, defending himself with an Attended Knight. Wiegersma was willing to trade his Primal Clay, sending it in to a potential trade. Righetti let it through, and Wiegersma added a Rhox Faithmender after combat, giving him a potential edge in a race.

With a haymaker left, Righetti tapped his five lands and dropped a Serra Angel into play, cementing his dominance in the air. Serra has a way of dominating combat when she hits the board, and prevented Wiegersma from making any really profitable attacks. He decided to send his freshly improved 4/4 Chronomaton into the Angel anyway, and Righetti chose to just let it through, content to swing back in the air in a race he looked to be winning at this point.

Just as swiftly as the Serra Angel had changed things, a Sleep from Wiegersma completely changed the course of the game. He had added a few other small creatures to his board, including a Scroll Thief and a Welkin Tern, and he was now free to attack through Righetti's tapped board. Righetti had a Divine Verdict to kill the largest attacker, the 4/4 Chronomaton, and an Unsummon for the Scroll Thief, dropping to 8 from the remaining creatures.

Righetti wasn't out yet, though. He untapped his lands (not his creatures) and drew his card, quickly dropping a Captain of the Watch into play. When the Netherlands coach leaned over the table to look at it, Righetti laughed, saying "It costs six mana, it has to be good!" And good it was in this spot, giving Righetti a way to rapidly fill his board and give him protection to survive the Sleep. With the ground route blocked off, Wiegersma turned to evasive measures to finish the game. He taught his Faithmender some Tricks of the Trade, attacking with it and his Tern to drop Righetti to 3, gaining 6 life in the process. This put him one attack from taking the game. Thirty seconds later and both players were reaching for their sideboards. 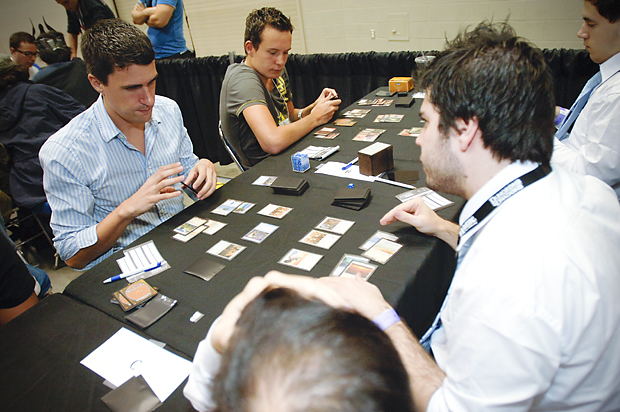 Wiegersma and Righetti in their central Team Captains' match.

While this battle had been taking place, both of Wiegersma's Dutch teammates had managed to pull out a win in their first games. In the A game, Bart van Etten managed to hold off a massive green army under the control of Martin Castillo, including a Thragtusk, with a wall of Crimson Muckwaders. This defense gave him time to draw into his incredible library of removal and slowly attrition his way to the win. On the other side, Floris De Haan took his first game swiftly with a Predatory Rampage that just decimated Federico Bigalli's Blue-Black Control deck.

While the teams were all playing, the Uruguayan team started to poke a little fun at Righetti for having to play Wiegersma.

"Yeah, and they gave me a shiny medal to take home," Righetti beamed!

The Dutch team found this rightly hilarious and got a good laugh. They congratulated the Uruguayan team on their victory in the Team Spirit competition yesterday and then slapped the game faces back on.

For the second game, things began in an odd mirror. Wiegersma had a War Falcon to match Righetti's Wind Drake, and both players had Knight of Glory to give the offensive advantage. Wiegersma had a slight advantage with a Guardians of Akrasa, but things were not that far separated.

Over the next few turns, though, a definite rift occurred. Wiegersma was stalled on three lands, but still found himself able to play the odd creature. Righetti had no such problem, and was able to make it straight to Serra Angel mana. Despite his mana disadvantage, the continued accumulation of exalted creatures kept Wiegersma from being completely out of the running. He managed to force a trade between his War Falcon and the Serra Angel, with Righetti content to continue plucking away with his Wind Drake in an otherwise empty sky. The sky stayed clear for the next few turns, which was all Righetti's Drake needed to close the case, 3 points at a time. 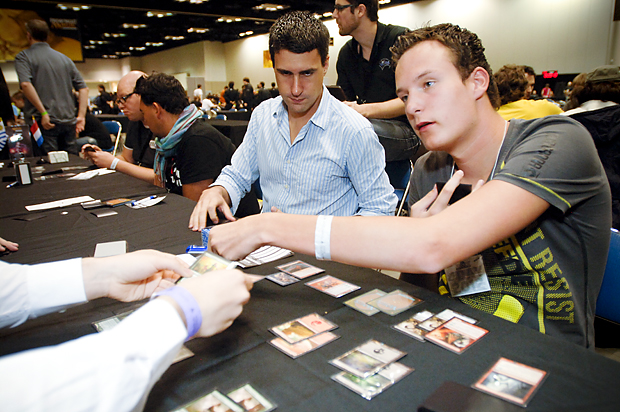 In the meantime, Van Etten saw a repeat of his performance in Game 1. His wall of Crimson Muckwaders and Giant Scorpions proved to be too strong a defense for Castillo's red and green monsters, giving the Netherlands the first match of this round. On the other side, Bigalli managed to barely escape an early end to this match by using Spelltwine to copy Murder and Cower in Fear, clearing De Haan's board. He was back in the game, but he was still going to have some climbing to do, and his back was against the wall.

For the final game, Righetti began with a quick Aven Squire and Attended Knight. Wiegersma, on the other side, made a pair of Scroll Thiefs and a Chronomaton to go along with his own Attended Knight. Wiegersma went ahead and attacked with both of his Scroll Thiefs into Righetti's two ground creatures, content to trade one of his Thiefs for the Knight's token and getting through with the second Thief for a card. When Righetti untapped and added a Healer of the Pride to his team, the game slowed to a crawl. The only valid attacker for the moment was Righetti's Aven Squire, and he started pecking away at Wiegersma's life total.

Wiegersma kept ticking up his Chronomaton, but the game had been elevated to the skies by this point. Righetti added a Welkin Tern, which Wiegersma matched, but Righetti trumped that once more with a Faerie Invaders. With three fliers to Wiegersma's one, Righetti sent his whole air force, losing his Aven in a trade with the Tern.

Wiegersma continued to draw land after land, holding four in his hand, while watching his life slip away. As the next couple of turns passed, Righetti swung for 5 points, then 10. Only one more turn was required for him to do the improbable and come back from one game down to defeat Hall of Famer Jelger Wiegersma and give his team the chance to advance! He was so excited after his win that he got up and left the play area, which would prevent him from coming back in and helping his team. 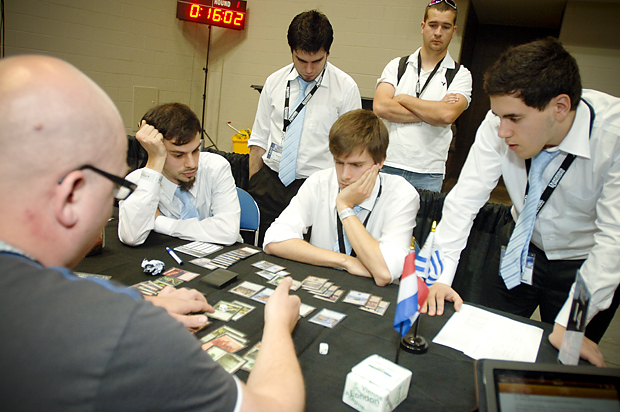 With the match decided by this game, both Bigalli and De Haan knew they needed to play tight. De Haan was up a game in this match. Upon sitting down, Bigalli seemed to be in the advantageous seat with a Liliana's Shade holding a Ring of Xathrid and a Faerie Invaders to De Haan's Arbor Elf and 3/4 Deadly Recluse. De Haan used a Prey Upon to kill the Faerie Invaders, but the Ring of Xathrid prevented his deathtouch from stopping the Shade. It took two more turns for Bigalli to push through the remaining blockers before De Haan quickly conceded, trying to conserve as much time for the final game.

Bigalli started off with a first-turn Chronomaton, which was quickly Naturalized by De Haan. De Haan added an Arbor Elf and a Ring of Kalonia to his side, but the Elf never got a counter, as Bigalli used a Cower in Fear to kill it. De Haan upgraded it to a Spiked Baloth, which attacked Bigalli for 4 before picking up the Ring. At the end of the turn Bigalli used Murder to kill the Baloth. He then passed the turn without a play, signaling to Wiegersma that something was up. He didn't quite get out that he smelled a counterspell before De Haan dropped a Garruk's Packleader into an Essence Scatter. De Haan had a second, but Bigalli had a Spelltwine to cast Murder and Naturalize to kill both the Packleader and De Haan's Ring.

After that exchange, Bigalli built up his board. He added a Bloodhunter Bat, Liliana's Shade, and Fog Bank to his team. The Fog Bank was particularly troubling for De Haan, as it could keep his Vastwood Gorger at bay indefinitely. Just as De Haan found a Searing Spear to kill the Wall, Bigalli replaced it with a Giant Scorpion. De Haan found another removal spell, but he and Wiegersma had to chat for a minute about which creature to Turn to Slag, ultimately deciding on a freshly cast 2/2 flying Primal Clay.

The death knell in the match came during the next turn, when De Haan's already depleted board lost its biggest presence to a Public Execution, leaving him solely with an Arbor Elf. He was down 9–13, and Bigalli held a major advantage, including a Liliana's Shade and a bunch of Swamps. De Haan found a way to get around the Giant Scorpion, but his Bladetusk Boar might not have enough time to get things done. Literally. Time was called right as he passed the turn to Bigalli. Bigalli's first turn forced De Haan to chump block with his Arbor Elf. When he used Essence Drain to remove De Haan's last blocker, his team went bonkers. He was left with just enough lands to pump his Shade for lethal, securing Uruguay a win against one of the most difficult teams in the entire field, let alone their own pool.