Singapore and Malaysia have something of a friendly regional rivalry, as Malaysia's large population earns it more Pro Tour Qualifiers every year, but Singapore's rabid Magic base often waltzes into the neighboring country to swipe blue envelopes out from under their noses.

"Old rivalries die hard," Ryan Luo said, laughing, as the teams sat down in the second round of Team Sealed play. Both teams had taken losses in the first round today and needed to win to stay viable for the Top 16. A loss this round would eliminate either team completely.

The teams acknowledged beforehand that the Singapore player base was much stronger than Malaysia's, but with Terry "Rakdos Augermage" Soh pacing the Malaysians, it was certainly anyone's game at this point. 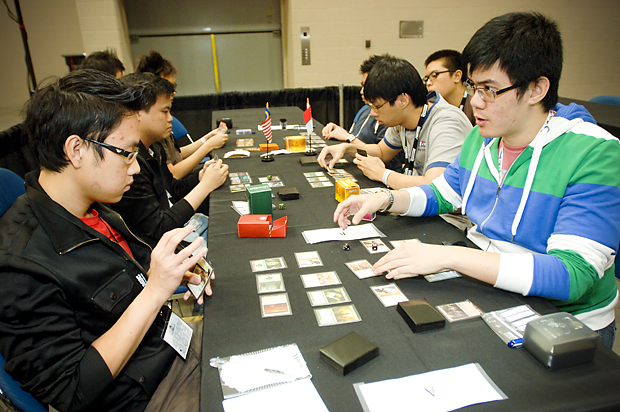 Elimination match! Malaysia (left) vs. Singapore is something of a friendly rivalry. No doubt whoever wins here will have bragging rights for some time.

The teams matched up as so:

And since we're fortunate to have the former Invitational winner at the table, we're following his match against Chapman Sim, who has been on two previous Singapore national teams.

Both Sim and Soh led off with Aven Squires on turn two, with Sim getting some help from an Island and Soh casting his off a Plains and a Forest.

From there, Sim curved effectively, playing an Attended Knight and following up with a Crusader of Odric, already a 4/4 on Sim's fourth turn.

Soh kept pace, though, with a Guardians of Akrasa, which not only stymied Sim's ground game, but also made his Aven Squire hit just a bit harder.

As the back and forth continued, Soh played a Deadly Recluse, gumming up the ground and the air... at least for the time being.

Odric, Master Tactician changed all of that immediately. If Soh didn't have an answer immediately, he wouldn't have any control over combat at all. On a clogged board, that could mean a quick death. 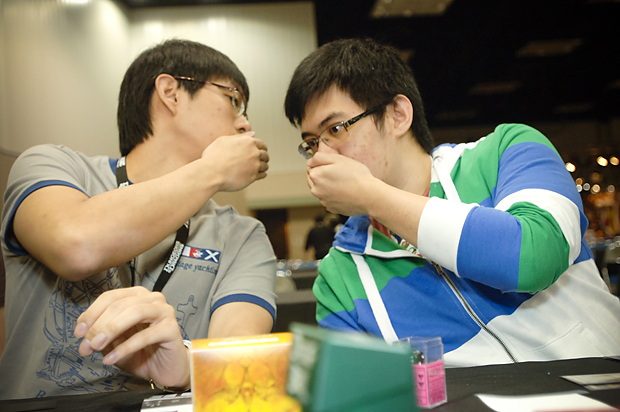 So, I should probably attack with Odric, Master Tactician and three other creatures." "I agree."

Elvish Visionary was not the answer he was looking for, and he stared forlornly at a slew of good cards in hand, including an Ajani, Caller of the Pride, all while stuck on two Forests and a Plains.

With no answer and no combat tricks, all it took was one attack with Odric to demolish Soh's forces, earning the quick concession.

Meanwhile, Singapore had also taken an early lead in Seat C, where Ryan Luo's monstrous mono-black deck had fallen as low as 5 life before stabilizing with Mutilate and Nefarox, Grixis Overlord. Liliana's Shade helped provide the final punch against Kenneth Wong's red-green deck before any burn was forthcoming.

However, Malaysia was busy dominating the B seat. Chee Choong Hiew's blue-black deck had systematically dismantled Kelvin Chew's red-green brew, finishing him off with a pair each of Bloodhunter Bats and Chronomatons backed by a Staff of Nin. Even a Garruk, Primal Hunter hadn't been enough to stave off the slew of removal at Hiew's disposal.

Second verse was much the same as the first, just a bit in reverse. Both players had Aven Squires, but with Soh on the play he was able to use Prey Upon with his exalted trigger to give him the Early Aven Advantage (patent pending) (not really).

But Sim would not be denied air superiority, as Talrand's Invocation gave him immediate control of the skies. Sim used one token to trade with an attacking Aven Squire, but was free to attack with the Drake with impunity.

It was at this point it became apparent that Soh was once again stuck on three lands. Even an Elvish Visionary couldn't help dig one up, as Sim's remaining Drake token kept attacking in.

Finally, Soh found his fourth land, allowing him to play a Healer of the Pride that Sim matched. Of course, Sim found his absolute trump with an Odric, Master Tactician the following turn, just one creature short of meeting the legend's attacking requirement.

Soh buttressed his defenses with Guardians of Akrasa and War Falcon, but Sim flashed in Faerie Invaders in hopes of triggering Odric. That just merited a Plummet from Soh before attacks. Passing without an attack, Sim played a fourth creature—War Priest of Thune—and equipped a Ring of Thune to his Odric. His hand at this point was stacked with removal, including Pacifism, Divine Verdict, and Oblivion Ring. It seemed he was girding his forces, reading for a massive strike.

All Soh could manage, though, was a 3/3 Primal Clay, preparing for what Sim and Odric, Master Tactician had in store for him.

What they had in store was an attack that killed Healer of the Pride and Elvish Visionary, crippling Soh's army.

"Odric is sweet powerful," Soh said, surveying the board when no help came from his library. Faced with a rare that took away any command he had over his defenses, the longtime pro conceded in order to help his teammates.

Hiew, though, didn't need any help. A pair of Welkin Terns had successfully raced a few ground pounders in the B seat.

That shifted everyone's attention to the C seat, where the fate of the round rested on a tense second game. Luo was still up a game, but had fallen to 2 life as Wong had started out aggressively. He fought back with a few timely trades and some removal, and then found some breathing room with an Essence Drain to at least put him out of Chandra's Fury range. The Essence Drain cleared out the last of Wong's board, but a few timely draws let him reload with a Krenko, Mob Boss and a Centaur Courser. 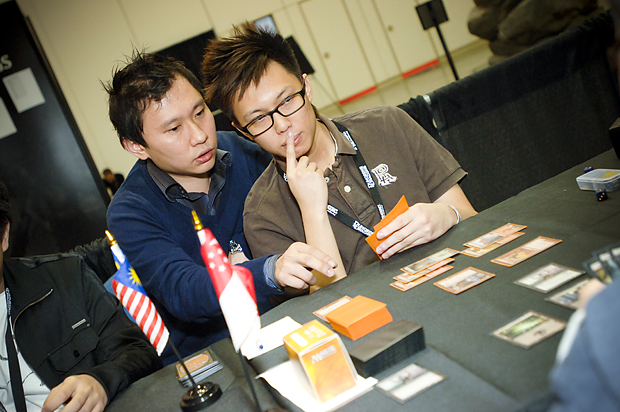 Malaysian Kenneth Wong needed all the help he could get from his teammates as his make-or-break match went down to the wire.

Back and forth it went. Mutilate cleared the board again and Luo had plenty of gas left in the tank. Tormented Soul, Knight of Infamy, and Liliana's Shade leapt on to the battlefield to threaten the Malaysian's life total and tournament.

Wong bought a turn with Arms Dealer, killing a Liliana's Shade, but when only lands came from the top of his deck, it was Singapore that found itself still alive to make the Top 16.