Team Stage 1 Round 3:
Electing to Play

This match was more pivotal for the USA than Greece. With a 1–1 finish, USA was definitely through to the Constructed stages with a win, while Greece, having started at 0–2, could not get through under any circumstances. While USA asked for a concession, Greece elected to play the match out, respecting that other teams in the group would suffer in this case.

"We had to ask," smiled Luis Scott-Vargas, who seemed happy with the Greek response and was eager to get the match started. 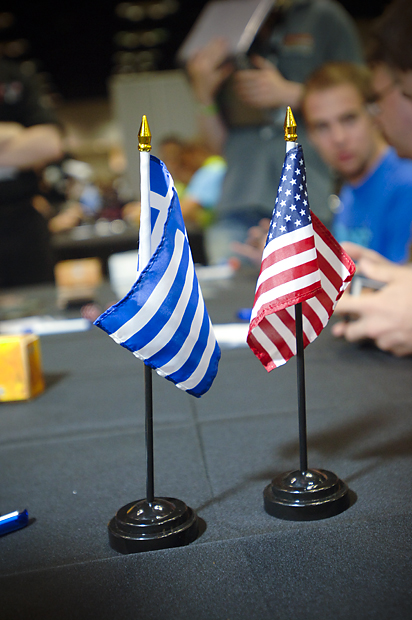 The flags of Greece and the United States stand ready to mark their teams in the Team Sealed competition on Day Two.

In Seat A, both players took a mulligan (the Greek A seat having had to do so eight times thus far).

In the center, Brian Kibler, playing a blue-black mill deck, was up against another blue-black deck. Kibler was short on any land but Swamp, although ultimately this played to his advantage, with a Mutilate to stop the early Greek rush. Kibler was playing mono-rare control, using Nefarox as his next threat. A Chronomaton came down as a second threat, but seemed likely not to be necessary, as Nefarox very swiftly took the first game for America.

Joe Pennachio also took his Game 1, with his white-blue deck powering through the Greek white deck. He looked to LSV as he sideboarded.

In Seat A, Alex Binek was a little slower to win his Game 1, but did so in the most decisive fashion. His mono-green deck was up against red-green, but with Garruk's Packleader and multiple copies of Duskdale Wurm, Binek had a formidable board.

Binek just burst out laughing along with his team, as he cast Predatory Rampage.

Vangelis Pelekanos looked to the team's fourth man, who was just making the "scoop them up" motion. US National Champion Kibler applauded his input. 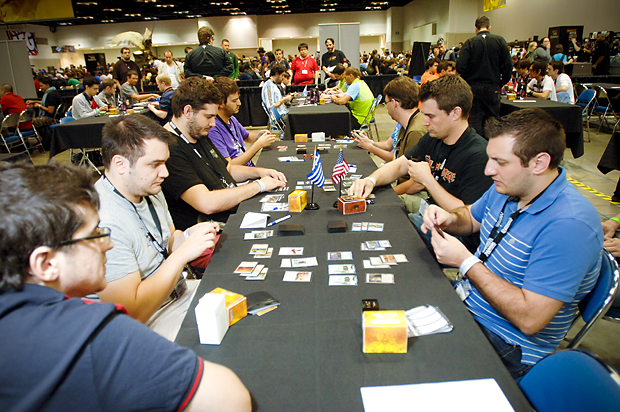 Greece and USA deep in concentration, with their coach-players looking on.

Game 2 wasn't quite as rosy for Kibler. He pulled the trigger on Mutilate to get a two-for-one, only to see back-to-back copies of Talrand's Invocation fill the board for Fondas Papadatos. An ever-growing Chronomaton could not race the Greek air force, meaning that the B seat match would go to a decider.

In Seat A, for the second time in the match, both players took a mulligan. This time, though, it was the Greek player who came powering out of the gates, eventually setting up a situation where, while busily jamming in to the red zone with Bladetusk Boar, he was able to use Mwonvoli Beast Tracker to find Elderscale Wurm. Traditionally a difficult card for mono-green to deal with, this was enough to prompt the scoop from Alex Binek of the USA. Another match would go to a deciding game. 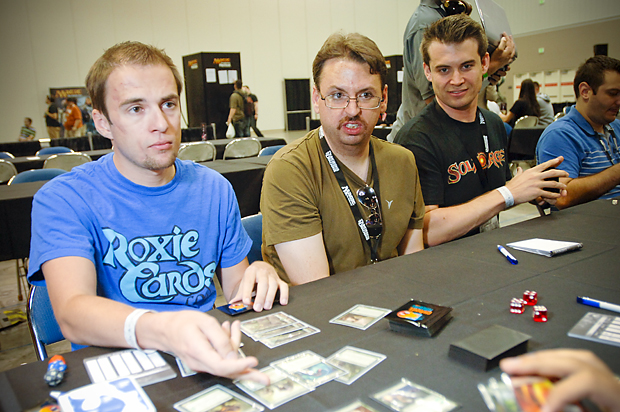 Kibler was not under too much pressure in his final game, getting up to six mana to cast Nefarox, but finding the legend to be stymied by Essence Scatter. Meanwhile a Wind Drake and Talrand's Invocation had been waiting to come down. The pressure was now in full effect. A Wit's End from Kibler was hit by Negate.

One plan from Kibler wasn't working, so he went a different way. Two copies of Mind Sculpt got Fondas low on cards, but he wasn't able to finish the deal before beatdown from the Greek player finished things with a Tricks of the Trade to shorten the clock. 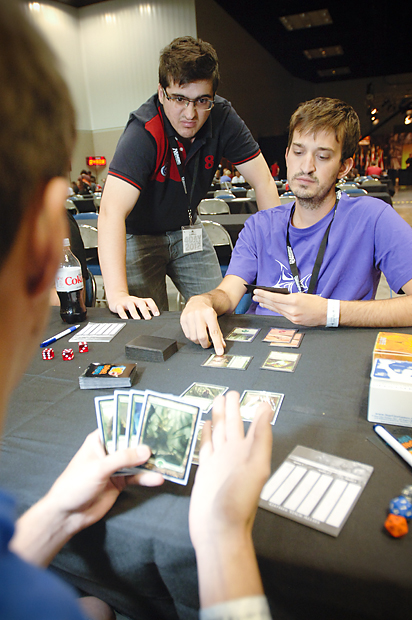 Now there was just one match to finish—Alex Binek against Vangelis Pelekanos. By this point Pelekanos was looking light on lands while Binek had a Duskdale Wurm among others beating down. While the Greek player had a Fog to buy a turn (presumably sided in as an answer to Predatory Rampage), the Americans didn't even need the powerful sorcery to, over a number of turns, seal the deal.

USA defeats Greece two matches to one, locking up their slot in the next phase of the competition.