Team Stage 2 Round 1:
Of Wolves and Men 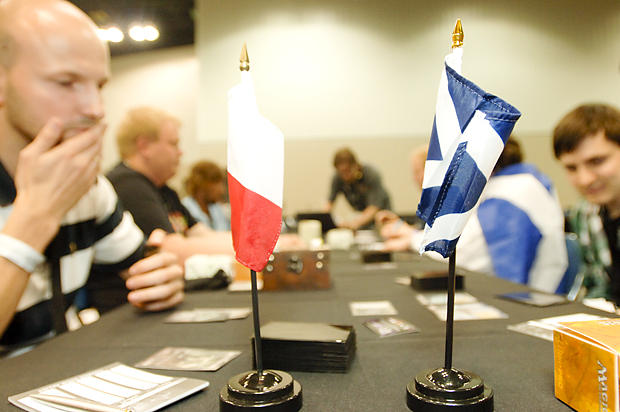 More than just national pride was on the line for Poland and Scotland.

Mulligans on both sides meant the Block match kicked off quickest. It looked to be a Jund mirror of sorts, where after some initial posturing with mana creatures, Poland took an early lead with Garruk Relentless to make a Wolf.

That board advantage didn't last long, with a Falkenrath Aristocrat killing off the Planeswalker. It took a second Garruk Relentless to kill the Aristocrat, in a trade that Scotsman Bradley Barclay was likely fine with.

Huntmaster of the Fells was the next swingy play from Barclay, but he wasn't able to keep it around for long, in the face of a Bonfire of the Damned from his opponent. A Bonfire came right back from Barclay in a match dominated by haymakers.

With an empty board, Tomek Pedrakowski of Poland had another powerful play: first Wolfir Silverheart, then an Avacyn's Pilgrim to pair it with. Barclay could only match half of this one-two punch, and with just the Wolf, he was left to do some chump blocking when the Pole attacked. A Tragic Slip turned the chump block into a trade, and a flashed-back Devil's Play cleared the board. All that effort to reach parity proved not to be quite enough, as Barclay still succumbed the following turn to the hasty attacks of a Falkenrath Aristocrat.

Just as Barclay was losing his first game, countryman Stephen Murray was winning his using a White-Blue Delver of Secrets deck to power through a Zombies deck piloted by Adam Bubacz. A series of Gut Shots had been instrumental in stopping the early rush, at which point Geist of Saint Traft and Restoration Angel had mopped things up.

In the center, Andrew Morrison was locked in a battle against Mateusz Kopec, whose RUG Next Level Blue deck was proving adept at slowing down a Jund assault. The Pole had won Grand Prix Vienna with just such a deck and seemed supremely confident to use Vedalken Shackles to devastate attack steps once more. While it took Kopec a while to really take control, those Shackles were enough to get there eventually, meaning that Poland had a small edge going into the second games. 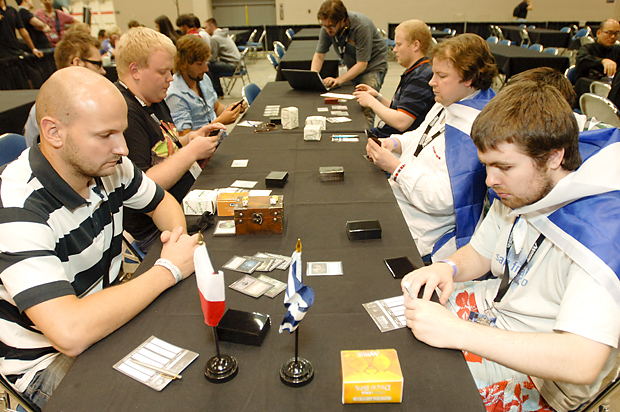 The Scots wear their national flag proudly across from their Polish opponents.

In the Block match, Pedrakowski had a mulligan and could only look on as a turn-two Scorned Villager flipped for Barclay, allowing a lightning-fast Wolfir Silverheart. Barclay might have been stranded without red mana, but it seemed he was in a good spot to get away with it. Olivia Voldaren from Pedrakowski wasn't even a speed bump, as Sever the Bloodline cleared her out the way and took the Block match to 1–1.

In Standard, it seemed Kopec was ready to switch gears a little, being more aggressive for the second game with a Huntmaster of the Fells, with which to attack the Scotsman. This aggression was mirrored by the Block match, where the Jund decks knocked heads, trading off removal spells for threats with every passing turn.

Somehow, it was White-Blue Delver of Secrets that was the most aggressive of all. Stephen Murray of Scotland was the first player to lock up a victory, with Geist of Saint Traft, Runechanter's Pike, and a series of Vapor Snags being enough to pummel Adam Bubacz' Zombies into submission. 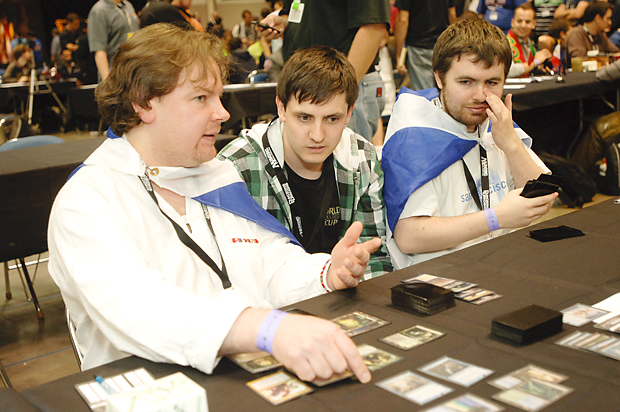 Team Scotland was the first side to win a match.

In the Block match, things were getting interesting. Huntmaster of the Fells from Barclay would be marginally less effective with a Witchbane Orb in play for his opponent, neutering the transform ability of Ravager of the Fells. Pedrakowski had a fully powered Huntmaster of his own, prompting Barclay to attack in and trade off most of his board before using Sever the Bloodline to mop up a remaining Huntmaster for the Pole.

With Garruk, the Veil-Cursed around, Pedrakowski was able to find more Werewolves at will thanks to the -1 ability of the Planeswalker, putting Barclay in a rough spot. While they were playing, Kopec won his Modern match, making Block the tiebreaker in the series. 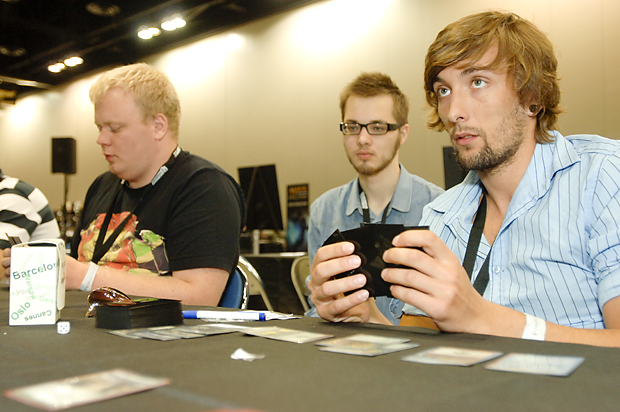 Team Poland battles to a split with Scotland, putting all the pressure on the third match.

Barclay found a Borderland Ranger and Falkenrath Aristocrat, with the latter a great answer to Garruk. Pedrakowski was happy to commit more big threats to the board, though, with a Wolfir Silverheart representing a clear and present threat to Barclay's life total. At 10 life after attacks, he looked at the 24 points he would need to deal and ultimately chose to start smashing in with his Aristocrat rather than holding it back for blocks. A flashed back Sever the Bloodline got rid of Wolfir Silverheart, but there was soon a replacement for Poland.

Still a third Wolfir Silverheart came from Pedrakowski, who was representing a colossal amount of damage in the red zone. While Barclay was able to stop some of it with Tragic Slip tricks, he was not able to stop it all, and scooped up his cards the very next turn.