So a funny thing happened on the way to the Team Constructed rounds. Team Uruguay

didn't have decks for the Team Constructed stage of the tournament, and they only had an hour to pull some out of thin air. Fortunately, Jorge Iramain of the Puerto Rican squad hooked the Uruguayans up with the Argentineans and the Dominicans, both of whom had failed to make it out of the first stage. Fortunately, they are all awesome people and simply let the Uruguayans borrow their decks, averting a minor crisis.

After their super-nice deed of the day, the Puerto Rican team was rewarded with a first-round win over France, putting themselves within striking distance of the Top 8. As the bottom seeded team in their pool, they couldn't rely on tiebreakers to advance. It was all about wins. This round, they faced off against the Ukrainian team that defeated the top seeded, very stacked Slovakian team. 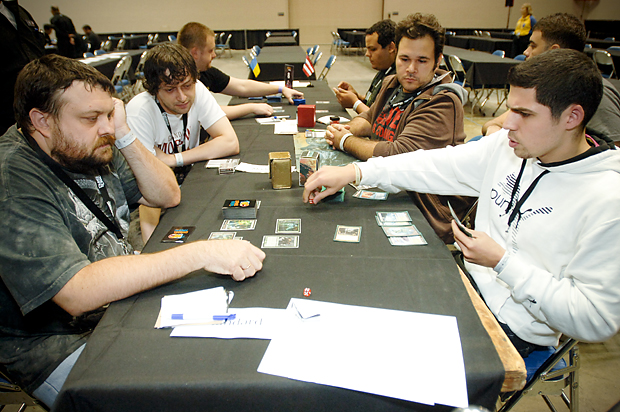 Team Ukraine and Team Puerto Rico begin their matches to determine who reaches the Top 8.

After examining the matchups, I chose to follow the Standard match between Igor Skrypov's Dungrove Green and Gabriel Ortiz's UW Delver of Secrets. Skrypov kicked things off with a turn-one Llanowar Elves, which was immediately hit with a Gut Shot. When Skrypov tried for a Predator Ooze on his third turn, Ortiz stopped him with Mana Leak. Ortiz took a turn away from the permission game immediately thereafter to make a Geist of Saint Traft.

Skrypov made a Strangleroot Geist and chose to attack straight into the other Geist rather than hold it back to block. He added an Ulvenwald Tracker to his team as well and passed the turn. With the path clear, Ortiz chose to send in his Geist of Saint Traft, cracking Skrypov down to 14. After combat, he supplemented his team with an Augur of Bolas and a Delver of Secrets.

Not wasting any time, Skrypov used the Tracker to have his Geist fight the Delver of Secrets, followed by a hasty attack for 3. After combat, Skrypov made a Dungrove Elder, then a 5/5. At that point, Skrypov was more or less all in, with only one card left in his hand. At the end of his turn, though, things unraveled. Ortiz used a Vapor Snag to send the Tracker back to Skrypov's hand. He then equipped a Runechanter's Pike to the Geist of Saint Traft and attacked. After a little Geist-on-Geist action, Skrypov was left with only a Dungrove Elder in play. He tried to play a Wolfir Silverheart to hold down the fort for a turn, but a second Vapor Snag at the end of the turn off of a Snapcaster Mage ended the game in spectacular fashion.

Looking around the rest of the table, Cesar Soto's Jund deck was down a game to Oleksandr Onosov's mono-black deck, keeping things at parity. In the Modern match, Puerto Rico's Jorge Iramain and Ukraine's Mike Krasnitski got deck-checked this round, so they had just drawn their opening hands of their first game. They were both playing Affinity, so it was entirely possible that they would finish their first game before either of their teammates finished shuffling. Sure enough, a double Cranial Plating for Iramain on the third turn turned into a 14-point attack, ending the game in less than two minutes. The pressure was firmly on the Ukranians.

For the second Standard game, Skrypov tried to get rolling with a Birds of Paradise on turn one, but Ortiz stopped him with a Mental Misstep. His deck was full of ways to deal with the myriad one-drop mana critters populating Igor's deck. An Ulvenwald Tracker stuck on the following turn, followed quickly by a second.

Ortiz was playing good old-school draw-go, holding his countermagic until he actually needed it. He wasn't afraid of the 1/1s, but an attempt at a Dungrove Elder drew a Mana Leak out of his grip. When Skrypov attempted to Rancor one of his Trackers, Ortiz used Vapor Snag to return it. When he tried to cast Green Sun's Zenith for three, Ortiz used Dissipate. The game looked firmly under his control.

Skrypov kept attacking. He found a Strangleroot Geist that made it into play. His attempt at replaying the second Tracker met a Snapcaster Maged Mental Misstep. Still, he was pecking away. Ortiz was down to 12, but it was at the stage in the game where that 12 should be half that. Things looked grim for Skrypov. Ortiz made a Delver of Secrets, prompting Igor to kill it with his Tracker and Geist. A Phantasmal Image met the same fate. Fortunately, Ortiz had made it a Strangleroot Geist, letting it come back with a counter. When it came back as a Snapcaster Mage, Ortiz re-cast Ponder, getting another that he immediately cast, ultimately finding a Gut Shot to kill the Tracker.

With the Tracker gone, Ortiz began to attack, dropping Skrypov to 10. He had to start leaving his Snapcaster back, though, as he dropped to a perilously low 4. Skrypov tried to get himself a bit of help from his deck, casting Green Sun's Zenith for three, but Ortiz had another Snapcaster to Dissipate it. Facing lethal damage, Skrypov conceded, giving the first match to Puerto Rico. 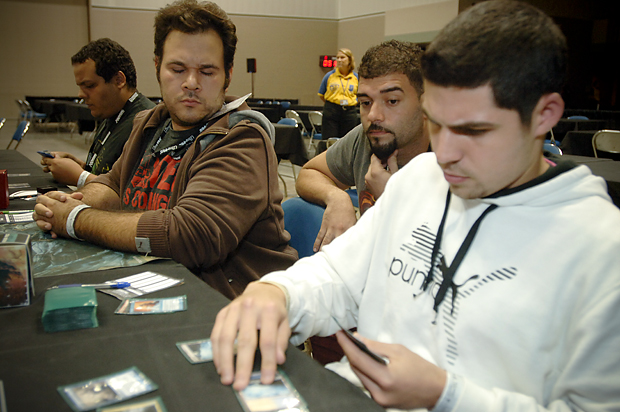 While the first match was going on, both other matches had been evened up at one game apiece. Onosov got started early, his mono-black deck serving up a Diregraf Ghoul and a Liliana of the Veil in the first few turns. Onosov was going nuts with Liliana, but Soto managed to keep her loyalty reasonably in check with some burn. Borderland Ranger came to the top of Soto's deck, fetching him a Forest and leaving him with one card in hand. Liliana dropped to kill the Ranger, clearing the way for an attack. That also left the last card in Soto's hand, another Bonfire of the Damned, which he cast for 2 on the following turn, dropping Liliana even lower and clearing the board. After ticking Liliana back up to 5, Onosov was forced to drop her back down to 1 as Soto slammed in with a Falkenrath Aristocrat.

The players began building their boards off the tops of their decks, with Soto getting another Aristocrat, while Onosov got a Skirsdag High Priest, Gravecrawler, and a very powerful Bloodline Keeper. As the Keeper started to churn out Vampires, Onosov began attacking with his team. Soto blocked both the Gravecrawler and High Priest, then sacrificed the one blocking the Gravecrawler to keep the other one alive. The attack dropped Soto to 3. He managed to rid himself of the Keeper with a flashed back Sever the Bloodline, but it wasn't enough. Two more turns and Ukraine had evened it up at one match apiece. 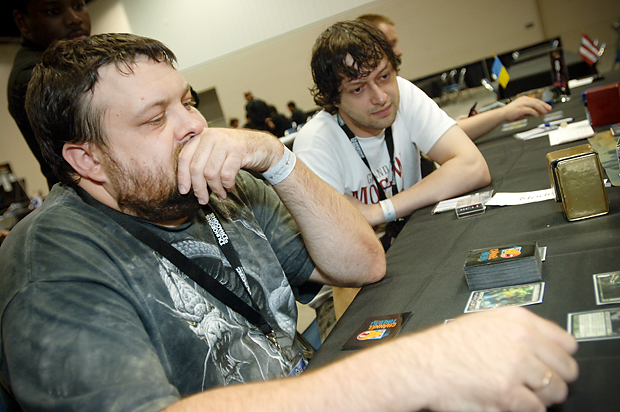 ...but Team Ukraine quickly evens up the record, putting all the pressure on the third and final match.

The final match was about halfway through the final game by the time I got to it. Krasnitski was sitting at 13 life with an Inkmoth Nexus, Cranial Plating, and a slew of artifact lands in play. He had clearly been using these to great effect, having dropped Iramain to 15, with 6 poison counters. Despite this, Iramain had found a pair of Nexuses of his own, allowing him to block. With a defense set up, he began his assault. He had a Memnite, Cranial Plating, Arcbound Ravager, and a Steel Overseer in play. The Overseer started adding counters and the rest of the creatures started attacking. Within two swings, Krasnitski was at 2.

Krasnitski untapped, surveyed the board, and made his move. He animated his Inkmoth Nexus, equipped it with the Cranial Plating, and attacked. Iramain animated his Inkmoth Nexus, tapping his only other land—the Blinkmoth Nexus—and made a move to block. Before he got too far, Krasnitski stopped him, casting Ancient Grudge on the Nexus before blockers. With slightly shaking hands, Iramain tapped his Nexus and a Springleaf Drum/Memnite to return the favor, Grudging the attacking Nexus, winning the game for Puerto Rico! Krasnitski didn't make him go through the motions of next turn's lethal attack, simply shaking Iramain's hand and wishing him luck.