The setup for the final round of the World Magic Cup allowed for a number of do-or-die matches and intriguing scenarios thanks to the seeding tiebreaker, and the Finland-Philippines match might have just been the do-or-die-iest (pretending that's a word).

Here's the scenario. Three teams in the group were still alive for the Top 8. Finland led the group at 18 points, but both the Philippines and Croatia had 9 points—one match win out of the top stop (matches were worth 9 points for a team match win). Since Croatia was the pool's top seed and the Philippines its second, that meant if Finland lost, Croatia could win to lock the Finnish out of the Top 8.

Both teams pounded fists with their respective teammates before the match started, primed for their win-and-in match. Neither squad had any margin for error, so we went ahead and followed each of the matches that mattered. 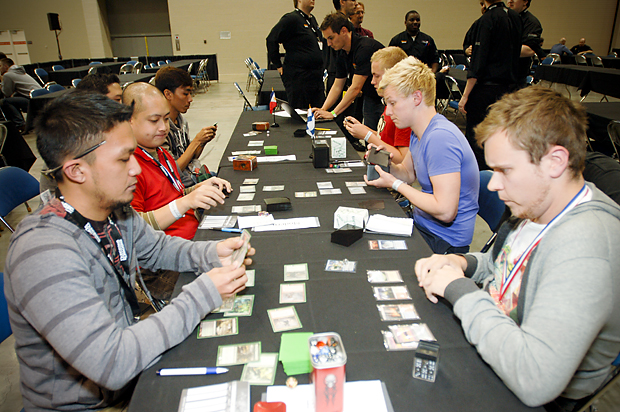 The stakes couldn't be higher: It was win-and-in for either Finland or the Philippines.

Finland's Etu Perttula and the Philippines's Andrew Cantillana faced off in a pretty common sight this weekend in Standard: the dreaded Delver of Secrets mirror.

Both players traded Delver of Secretss and Gut Shots and Restoration Angels for what seemed like a million turns, grinding out damage here and there and losing life for Phyrexian mana now and then.

Cantilla eventually found more Restoration Angel action, dropping the Finlander to just two life. But Vapor Snag and some Spirit tokens let him crawl back in the game. An extra Geist of Saint Traft allowed him to suicide the first just to get in the extra damage.

But a second Restoration Angel and a fortunate Delver of Secrets flip gave Cantilla 9 power worth of air superiority, letting him crawl back into the game and eventually run Perttula down.

Unlike the grind-fest that was Game 1, the second set between the two was quite uneventful. Cantillana flipped two Delver of Secretss early while Perttula struggled to flip even one, and Cantillana's draws simply outclassed Perttula's at every turn. Perttula actually Pondered three times, and every time he saw three lands.

With that, the Philippines were up a quick game and halfway to securing their spot in the Top 8. 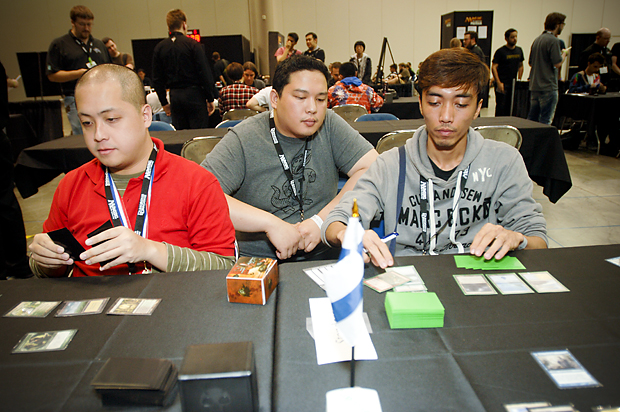 The Philippines's Andrew Cantillana (right) put his team up early on the way to a possible Top 8 berth.

An early Olivia Voldaren started things off for the Philippines's Zax Ozaki, but a Tamiyo, the Moon Sage put it on lockdown. Zealous Conscripts stole it for a turn and drew three cards to drop Finland Team Captain Max Sjoblom to just 8 life, but it wasn't near enough to put the RWU Miracles player off his game.

Getting Tamiyo back, Sjoblom drew three cards of his own, finding a Terminus to clear the board. Ozaki reloaded with Garruk Relentless and a Borderland Ranger, but Rolling Temblor kept the board clear of creatures, if not of the pair of dangerous Planeswalkers facing off.

Ozaki soon found himself a bit flooded, letting a non-miracle Entreat the Angels put Sjoblom in the driver's seat. From there, his card advantage and flashback spells let him take total control of the game, winning a few turns later with some flying 4/4s.

An early Liliana of the Veil started working on both players' hands, as Sjoblom didn't have a good way to deal with the offending Planeswalker. Garruk Relentless soon followed Liliana onto the battlefield, and with no miracles forthcoming, Liliana got to do her ultimate thing, leaving Sjoblom with just four lands, sacrificing two mana sources and a Tamiyo, the Moon Sage.

As miracles turned nearby, the Philippines's Gerald Camangon (Doran) and Finland's Sami Haggkvist (RUG Delver of Secrets) were beating each other bloody.

Tarmogoyf and Delver of Secrets squared off early, with Tarmogoyf winning the early battles as one Delver of Secrets died and the other took a turn to flip. The players then traded multiple removal spells while their signature creatures beat down. However, Hagkvist resolved and kept a Vedalken Shackles on the table, stealing Tarmogoyf and turning the game on its head.

Camangon wasn't done yet, though. With Hagkvist at a low life total, he was forced to untap Vedalken Shackles to help defend against a newly played Knight of the Reliquary and Thalia, Guardian of Thraben, loosening any advantage he had. Stealing the Knight of the Reliquary in turn, Hagkvist found enough blockers to stay alive for some time, even resolving his own Tarmogoyf.

But it wasn't to be. Hagkvist was forced to drop to just 2 life fetching lands, and at that point almost any extra creature from Camangon became lethal, meaning any game win from the Philippines, in either Modern or Block, would seal their ticket to the Top 8 while Finland would have to squirm over the Croatian result. 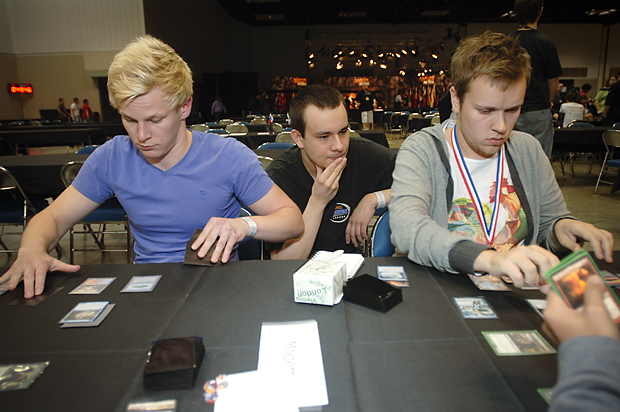 Sami Haggkvist (left) and Max Sjoblom (right) face off against their opponents as Matti Salmi watches on.

This time it was Haggkvist with the Tarmogoyfs... a whopping three of them to put tons of early pressure on Camangon.

Path to Exile and Maelstrom Pulse slowly took care of the trio of Future Sight beaters, opening the way for Doran, the Siege Tower himself to pair with a Qasali Pridemage, quickly reversing the table and dropping Haggkvist to just 6 life.

But the Finnish player wasn't out of it just yet. Cryptic Command kept Haggkvist alive for a turn, drawing a Lightning Bolt to kill the Pridemage. That turned out to be key, as it allowed him to topdeck Vedalken Shackles and threaten to steal Doran.

However, Maelstrom Pulse brutally put an end to those dreams. Haggkvist gamely stole Doran temporarily in order to keep it from attacking, but it wasn't to be. One more turn and one more blank draw, and it was the Philippines celebrating a berth in the first Top 8 of the World Magic Cup.

As for that Croatian match?

It went to the final game of the final match, but Croatia pulled it out by winning a Block Jund mirror match, freezing the Finnish out of the finals by the slimmest of margins.