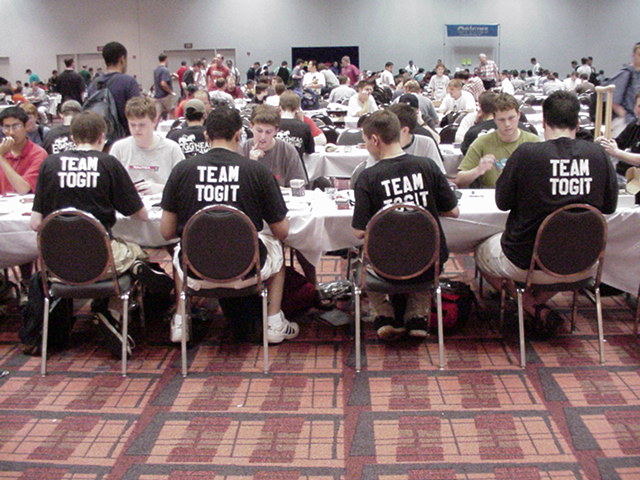 With their matching shirts and impressive record, an observer might come to the conclusion that Team TOGIT is a serious team that came to take no prisoners and walk away with the $1000 prize. While they may be doing well, their attitude is anything but serious. I talked to the team after their convincing win in the Top 4, as they waited to see which team they would face in the finals.

When preparation was brought up, it triggered a big laugh out of the whole team. They built their decks in the hotel room the night before, and showed up to play. Scott Kasliner, who is a Neutral Ground Online columnist, went 14-0 in games with his Type 1 Mono-blue control deck. When asked about his preparation, he stated in his usual loud yet lighthearted tone, "I had never even touched a Mox . . . I had never even held a Mox until today!" Scott had tested Trix but was not happy with the results. He then found the blue control deck on the Beyond Dominia website, which specializes in the Type 1 format. Scott described his team's reaction to the deck: "My team asked me, 'Where's your good cards, where's your Stroke of Genius?'" It's safe to say that his teammates are now content with the build, as it has yet to lose a game going into the finals.

I asked about their limited preparation, which resulted in the team joking back and forth with each other. "Well, I read lots of Toby Wachter articles, they helped out a lot . . . ", "I read Gary Wise articles on draft . . . ", "Yeah, actually, I memorized all his suggestions for draft picks . . . " "I want to have his children!" For a team that was going to play for $1000 in a few moments, they certainly seemed very relaxed.

The other observation TOGIT was quick to point out was the lack of Sligh decks in Extended. Patrick Sullivan played a Sligh deck in the Extended portion of the tournament, and commented, "Sligh was really under-represented today. In an unestablished metagame, you'd think people would fall back on Sligh, but instead they're playing stuff like Turbo-Land. I played against a Turbo-Land player today and he was going off, drawing cards, playing land. I did the Dave Price stare, untapped and just killed him."

When the finals came up, TOGIT was pretty optimistic about their chances. They discussed that they had already defeated Team Egghead Games in the swiss rounds. Scott considered his match a bye, and Osyp commented that his sideboard of four Dodecapods against Kenny Hsiung's discard heavy deck would make a big difference. Scott also mentioned that the Back to Basics in his deck had been amazing all day. Osyp interjected, asking "Why do we keep talking about Type 1? What, like people around the world are suddenly going to say, 'Finally, a good Type 1 Article!'?" This also got a big laugh from the group, who were obviously having a great time today. As if it was an afterthought, I asked them if they would be victorious, and they all replied "Yeah, we're gonna win".