he World Magic Cup is underway here in Amsterdam, and over seventy teams from across the globe, from countries as large as China and the United States to teams from Singapore and Cypress, have joined together to do battle with one another to see which country will sit atop the world of Magic for the next year. The defending champions from Chinese Taipei are set to defend their title, though only the captain, Gold-level Pro Tzu-Ching Kuo, returns from last year's victorious squad. In order to repeat as champions, they must prove their skill across three unique formats: Magic 2014 Team Sealed Deck, Unified Standard Constructed, and Return to Ravnica Block Team Sealed Deck.

While these formats see only sparing use in the professional circuit (there are usually only three or so Team Limited Grand Prix events in a given season), they are wonderful ways for a group of friends or local players to challenge themselves and have some fun with Magic in a new way.

First up this weekend is Magic 2014 Team Sealed Deck. In this format, teams are given twelve Magic 2014 booster packs to form their pool of cards. For the Return to Ravnica Block Team Sealed Deck rounds, teams get four packs each of Return to Ravnica, Gatecrash, and Dragon's Maze. With these packs, teams work to build the best three decks they can in the allotted time. Once decks are built, teams assign a player letter A, B, or C. They then match up against the corresponding letters of another team each round. As the individual matches play out, the first team to win two individual match is considered the winning team for each round.

For example, in last year's Finals, Chinese Taipei was able to win two of their matches before the third finished, giving them the win before they finished the third match. If Gabriel Nieves had managed to defeat Yu Min Yang in the second match, however, it would have tied the team match at one individual match apiece, forcing Tzu-Ching Kuo and Jorge Iramain to finish their individual match to determine the winning team. 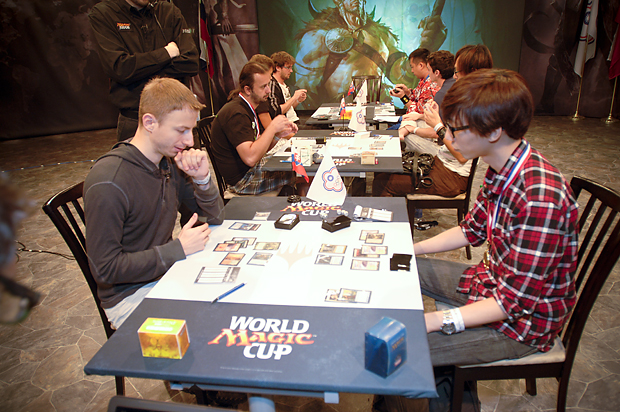 Chinese Taipei won the first World Magic Cup last year. With the standards now set, Tzu-Ching Kuo and his teammates have a title to keep in their region! 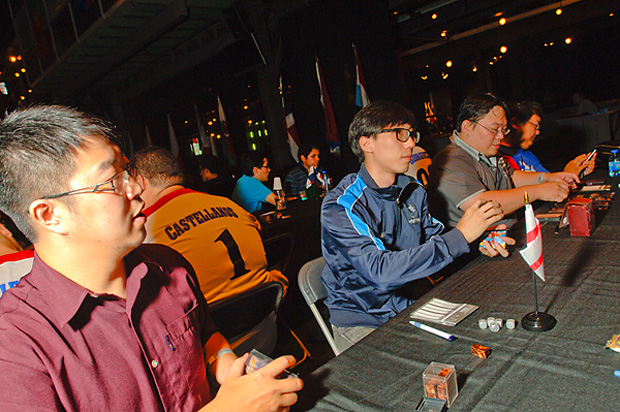 Team Sealed Deck is a very different sort of Limited beast than most players are used to. Imagine any Sealed Deck you've ever built. When building an individual Sealed Deck, you get half of the cards given out to teams. This means that there are twice the number of Doom Blades, Act of Treasons, and Banisher Priests to build with in Team Sealed. There are twice as many Shocks to think about in the red decks, and twice the Rootwallas making combat tough for you. As such, decks don't really tend to resemble the typical Sealed Decks you're used to seeing. They are much closer to the best draft decks you've ever seen in your life, much closer to Constructed decks than anything. Understanding this jump in power level is the first step to understanding Team Sealed Deck.

Another very important consideration for Team Sealed Deck is that there are three decks that must be built using five colors. You may have noticed this, but that doesn't really divide cleanly. There are many ways to deal with this fact, and each individual format deals with it in special ways. In Return to Ravnica for example, the guild structure makes it easier to split things amongst three decks, as ten guilds divide into three decks a bit more cleanly. For Magic 2014 Team Sealed Deck, you have a number of options. Maybe you build a mono-color deck, like mono-green with a trio of Howl of the Night Packs. Maybe you take the natural divisions in colors like white and exploit them. White is equal parts controlling cards like Angelic Wall and Griffin Sentinel and aggressive cards like Master of Diversion and Charging Griffin. Breaking those up into decks that are more in tune with those strategies is a very reasonable way to divvy up the colors in a Team Sealed Deck. There are plenty more strategies available, and the best way to find them out is to sit down and spend a weekend afternoon fighting against some friends.

There you go! Another way to enjoy your time playing Magic with friends, one that's both fun and challenging enough to be used as an event like the World Magic Cup. All you need is twelve packs per team, some three-person teams, and some time set aside. So get out there and be like the best in the world. Crack some packs, build some sweet decks, and smash the living daylights out of your friends. That or tune in to watch them do that here in Amsterdam this weekend!