The first half of this Austria-Israel match was full of familiar faces: Helmut Summersberger and Thomas Preyer, Pro Tour regulars, and Top 8er Uri Peleg, who was joined by teammate Eviatar Olpiner. They were joined at the top table by teams from Japan and the Netherlands. 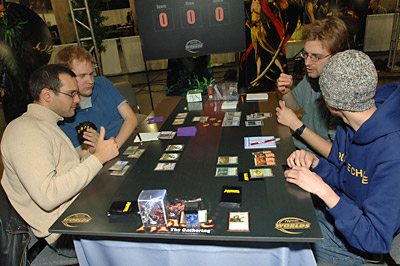 Austria's Helmut Summersberger and Thomas Preyer confront Israel's Uri Peleg and Eviatar Olpiner. The draft seemed to go smoothly for both teams. Midway through pack 2, Preyer pointed out a wealth of Kithkin cards coming their way and moved to a white-based aggro deck to complement their blue control. Black was the natural pair there, giving the control deck some removal, and Preyer advocated Quill-Slinger Boggarts to turn late-game Kithkin into more damage even on a snarled board.

Peleg and Olpiner had likewise established decks' roles as early as pack two. They were straight tribal: Giants on one side and elves on the other. The pairing of early and late game beatdown was appealing. They headed to the feature match area ready for battle.

Preyer rolled high and offered the die to Peleg. He tried to put the responsibility on Olpiner, who demurred. Peleg threw a four, and Preyer gave a small cheer.

Antonino DeRosa (from the rail): "You're supposed to win the match before you pump the fist."

Preyer and Olpiner mulliganed, and they were off. Preyer had stood on a one-lander with Goldmeadow Harrier and numerous two-drops (later saying that even missing a turn or two was worth its strength), and his daring paid off, allowing a turn-two Wizened Cenn. The Harrier hit for 2 and Summersberger made Stonybrook Angler.

Peleg put out a Woodland Changeling and let Preyer hit for 4, not letting him cash in an obvious trick. Preyer's Kithkin army grew with Cenn's Heir. Summersberger played Boggart Loggers, and now Team Israel was facing a very fast clock.

Olpiner's Blind-Spot Giant was no immediate help, but Peleg had Imperious Perfect ready to turn the tide. Unfortunately, twice the players means twice the removal. Preyer had Oblivion Ring, and his Kithkin charged again. This time Peleg's changeling did block, but Shields of Velis Vel made the save. Team Israel was down to 16.

Olpiner made a Lowland Oaf, and Peleg had a pair of Daggerdares. Nameless Inversion from Summersberger killed the Oaf and turned off Blind-Spot Giant, readying another brutal attack. The Daggerdares finally managed to kill the Wizened Cenn. Israel stood at just 7 life.

The fact that Summersberger was stuck on three lands did little to cheer them. Olpiner played Kithkin Healer and passed it back. Israel needed a swing here, and after a Blind-Spot Giant resolved, Peleg went for Final Revels. Summersberger was ready with Broken Ambitions. He clashed with Olpiner, who showed a too-late Austere Command that matched up poorly with the second Ambitions on top of Summersberger's deck.

Not that there would be another turn. Wings of Velis Vel sent Cenn's Heir to the skies, and with the bonuses from his Kithkin pals and another 2 damage from the unblockable Loggers, the game went to Austria.