Teams Round 1: Is This Real Unlife?

The Netherlands is a country with a long successful history in Magic, including in the Worlds team competition, which was won by the powerhouse team of Julien Nuijten, Robert van Medevoort and Kamiel Cornelissen in 2006. Back then they faced Japan for the title. Now a Dutch team of Peter Kesteloo, Nick Bresser and Ruben Snijdewind is facing off against Taiwan (Tzu-Ching Kuo, Chun Bo Ruad and Huo Shan Huang). 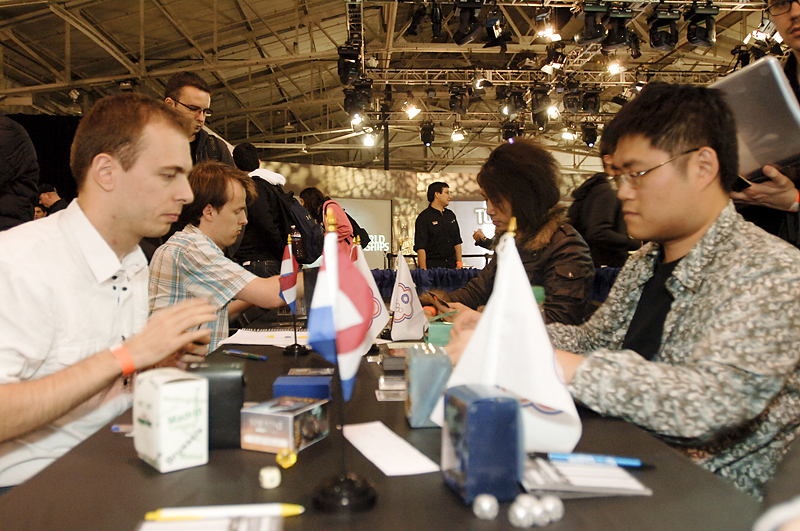 The Netherlands Team put themselves in a quick lead against the Taiwan Team.

The Taiwanese team is quite a force themselves, with Tzu-Ching having a bevy of Grand Prix Top 8 performances on the sly. It is his Modern match that I started off at in a three match bonanza.

For the uninitiated, the way that Worlds team matches work is as follows. Each player on a national team has a Constructed deck of either Standard, Modern or Legacy (one of each). They play a match against their counterpart, with the winning national team being the one to score two out of three wins in total between those three matches. A multi-format challenge, it shows off the strength in depth of a team's deck building prowess as well as their play skill.

In Modern Peter Kesteloo was on the play, and a turn-one Serum Visions suggested some kind of combo deck. A Lotus Bloom came next, while for Tzu Ching Kuo there were the tell-tale artifact lands of Affinity. An early Cranial Plating plus Inkmoth Nexus looked like it could race, but Lotus Bloom powered out a fast Ad Nausaeam. Angel's Grace meant that Kesteloo could draw his entire deck without fear, meaning that a Conflagrate could end things in speedy fashion. The Netherlands was its first game up, in no time at all.

In the middle, Red-Blue-Green with Delver of Secrets squared off against Storm Combo; likely to be an explosive match. An early Delver, backed up by countermagic was enough to give Taiwan its first game, without the Dutch player managing much at all.

Standard was Red-Green Kessig Wolf Run (NDL) versus Green-White Tokens (TAI). Garruks traded off, but it was NDL that took an early lead on the board with Primeval Titan. An Oblivion Ring on the Titan stopped it from doing too much, and Geist Honored Monk gave Taiwan a way of attacking back. However, Kessig Wolf Run is a hard card to race, and even with an ever growing board of threats, Chun Bo Ruad of Taiwan looked in rough shape against Nick Bresser's amazing amounts of mana, with enough mana creatures to attack with and pump. Bresser lost a Birds of Paradise to Garruk Relentless, a threat that he had to prioritize attacking ahead of Chun Bo Ruad himself. When a Day of Judgment followed, it was enough to possibly win things back.

It was for naught though, as a fresh Birds of Paradise was enough to end things in Netherlands' favor, attacking with Kessig Wolf Run to take game one.

Modern game two looked to be an explosive one again. This time the Netherlands had two copies of Lotus Bloom on the first turn. While Taiwan was going first, and had a quick Vault Skirge, Mox Opal, Frogmite draw, it would be tight to end the game before those Blooms did their thing. Tai had a Cranial Plating to make things close, but would be unlikely to have much in the way of disruption aside from, you know, winning.

Netherlands was at 7 life when the Lotus Blooms each came off suspend, and their team played Phyrexian Unlife. This was followed up by Ad Nauseam. As Ad Nauseam causes life loss (not damage) it would only serve to create a very low (negative) life total, and not actually cause the Dutch player to lose the game. This allowed Ad Nauseam to go for the full contents of the Dutch deck, again for a lethal Conflagrate, giving the Netherlands their first match.

In Legacy there was again a dreaded Delver of Secrets, and when the Dutch player went for a Duress, it was seen to be backed up by a pair of copies of Force of Will and plenty of burn. As Delver of Secrets turned into Insectile Aberration, it presented a substantial clock on the middle of the three matches.

A Doomsday came on the clutch turn, when there was little time left. Could the Dutchies clinch the win without having to get to the Standard decider? Tai had different ideas though. A Lightning Bolt shortened the clock just enough to square the match by winning Legacy for Taiwan. 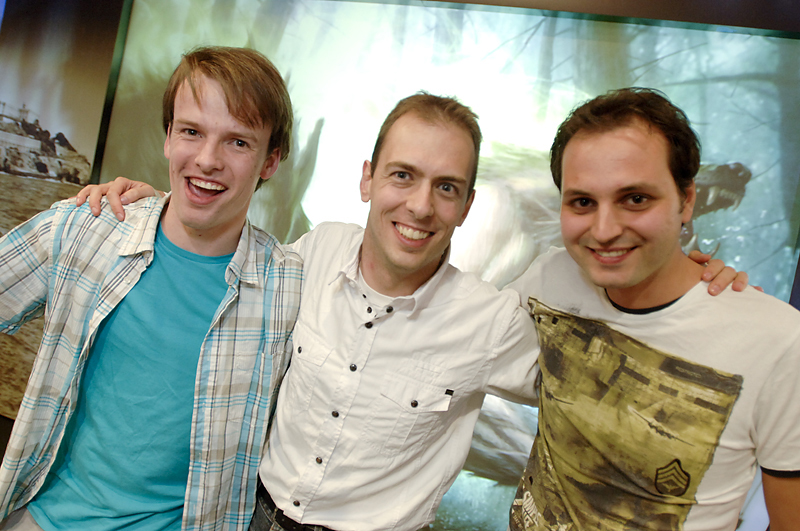 Netherlands takes it in the Standard match to win their first round of team battles!

Over in Standard, Taiwan was looking good for game two. With Sword of War and Peace, and a Garruk Relentless to provide sword holders, it seemed possible that the whole match would come down to one last game. Nick Bresser was not out of the race though. He had an Inkmoth Nexus, and Chun Bo Ruad was on nine poison. The problem though, was that there was a Mortarpod on the Taiwan side of the board. As long as it was there, the Nexus would have to hold back.

Netherlands had live draws, but with each passing turn, Bresser had less time to draw them. Finally, the match was decided. A Beast Within on Mortarpod was enough to clear a path for Inkmoth Nexus. Netherlands won that match, and with it the overall teams match.

2 Sword of War and Peace 2 Mortarpod