Teams Round 2: Crossing the Alps

Christoph Huber is having a pretty busy week here in New York. In addition to being in the Top 8 of the individual event, he is on the Swiss team who are currently riding high on the team standings. For this round his teammate would be his fellow finalist from Swiss Nationals, Raphael Gennari. On the other side of the table, Stefan Stradner and David Reitbauer of Austria were shuffled up and ready to play.

While both the Austrians chose to keep, Huber took his "free" mulligan on the draw. The Austrians led with a Goldmeadow Harrier, seeing a Goldmeadow Stalwart in return. The blue-white deck from Austria had all the action early, following up its Harrier with a Deeptread Merrow, while the red-black deck held back. 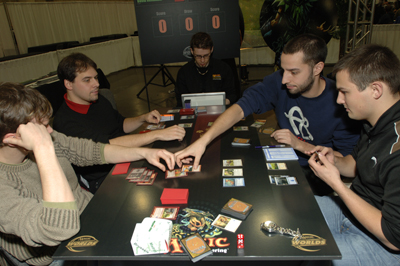 Austrians Stefan Stradner and David Reitbauer suffer the wrath of Raphael Gennari 's removal, while fellow Swiss teammate Christoph Huber looks on.Switzerland had a similar combination of colours, but there was a Kinsbaile Skirmisher and a Squeaking Pie Sneak from the Swiss that enabled them to be a little more aggressive. Christoph and Raphael conferred for a while, following a pass from both members of the Austrian team before playing Hurly-Burly, looking to clear the Austrian board. Shields of Velis Vel answered this though, and meant that Deeptread Merrow traded with Kinsbaile Skirmisher. Silvergill Adept came from Christoph, while Raphael had a Thoughtseize that hit the potentially devastating Thundercloud Shaman.

Lowland Oaf from Austria got hit by Lash Out, but the clash came up a draw as both players revealed a land. The Swiss maintained their momentum with attacks that steadfastly refused to get wrecked by Sentinels of Glen Elendra—Surge of Thoughtweft forced a trade and took the Austrians to 18. Christoph played a Goldmeadow Harrier, only to see it die to a Consuming Bonfire. A Plover Knights came out, but was soon dealt with by the Swiss, who had a Lash Out revealing Final Revels to win the clash. The Revels went to the bottom of Raphael's deck, as he didn't have enough land to play it, and the Swiss simply attacked their opponents down to 8 before playing a Judge of Currents.

Austria had an Æthersnipe to bounce Squeaking Pie Sneak, and an Adder-Staff Boggart (who lost the clash) before passing. Now forced on the defensive, they seemed untroubled by the frantic conversations going on on the other side of the board. Unlike in many matchups, the native language of both countries in this matchup is the same. With both teams speaking German, communication channels were pretty open. Huber had a Sower of Temptation to steal Æthersnipe, which prompted a laugh from the Austrians, who could see they were in trouble.

Just a Lowland Oaf came from them on their turn, while the Swiss had Warren Pilferers (returning Adder-Staff Boggart) and a Kinsbaile Skirmisher. The attacks that followed were more than enough to finish things off.

At the end of the match, Raphael spread out his red-black deck on the table. It was almost exclusively removal spells, which had proven enough to deal with both the Japanese and the Austrians in turn.

Over on the other side of the Switzerland vs. Austria match, there were similarly naughty things happening. With Judge of Currents and Summon the School going, the Swiss handily got up to over 50 life, all the while applying sufficient beats to take down the Austrians. This 2-0 sweep means that Switzerland secures the full 9 points for the round.