Teams Round 3: "Start the Beatdown!"

As the players sat down to the first match of their second Two-Headed Giant Draft there was some confusion over the arrangement of the feature match signs. The round saw Great Britain's team 2, Stuart Wright and Daniel Godfrey, against Canada's team 2 of Richard Hoaen and Daniel Kramer. Hoaen, who hadn't originally been on his national team's roster prior to the weekend, managed to get in when one of the team's actual members had to decline his invent due to school finals. Unfortunately the player hadn't received his schedule in time to notify the DCI before the cut-off date, meaning the invite dropped not to Canadian Nationals 5th place finisher Matt Vienneau, but to the highest-placing Canadian Nationals participant present at Worlds. That meant Hoaen was in by default.

The Brits won the die roll and opted to play but Godfrey had to use his free mulligan to see a brand new seven cards. Fortunately those were good enough, and with the Canadians satisfied with their hands the British team led with both players on Mountain and Godfrey playing a Flamekin Bladewhirl.

Not to be outdone the Canadians soon added creatures of their own to the board, Daniel Kramer with Leaf Gilder and Hoaen with Nectar Faerie. That drew a pause from the British players, with Wright leaning in to examine the tiny flyer. "Really?" he asked, commenting on the lack of play the 1/1 sees in individual Limited. Hoaen simply shrugged before trading it with the Flamekin Bladewhirl. 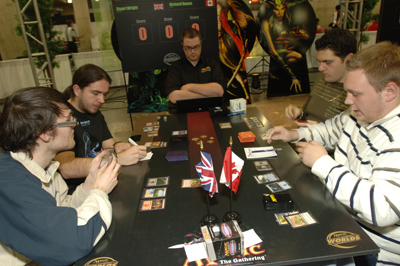 At the end of the first few turns the totals stood 28–28. A Peppersmoke from Richie Hoaen had dealt with a Daniel Godfrey Flamekin Spitfire; Godfrey's Broken Ambitions had in turn prevented Daniel Kramer's Lys Alana Huntmaster from entering play. Stuart Wright had a lonely Blind-Spot Giant patiently waiting for another tribe member to play with, and his teammate had a Pestermite. The Canadians, on the other hand, had a Leaf Gilder and Moonglove Winnower which was quickly killed by a Lash Out from Wright.

Wright then followed up with a Giant for his Blind-Spot, and an impressive one at that, in Brion Stoutarm. Unfortunately for him Rich was ready with a Broken Ambitions for one. The tapped-out Brit had no choice but to watch his 4/4 go to the graveyard before passing the turn with his teammate. Hoaen and Kramer wasted no time making some big plays on their turn: Hoaen had Fathom Trawl for Whirlpool Whelm, Faerie Trickery, and Sentinels of Glen Elendra while his teammate made Wren's Run Vanquisher and Elvish Branchbender. The British team contained the 3/3 with a second Lash Out before playing a Soulbright Flamekin and passing.

A following series of attacks from both teams and a Hoarder's Greed from the Canadians left the life totals standing at 24-22 in favor of the North Americans and when the British took their next turn they had to think carefully. Hoaen still had his Sentinels of Glen Elendra in hand from the Fathom Trawl, and both of the British team's potential attackers were 2/1s (Soulbright Flamekin and Pestermite). Eventually they decided to attack anyway, indicating some type of trick for the 2/3 with flash. When Richard tapped four mana and played the Faerie, Stuart Wright revealed he wasn't bluffing by playing Nameless Inversion. Hoaen had a trump, sort of, in the form of Familiar's Ruse. The effect would counter the removal spell, but unfortunately his only creature was the Sentinels, so he had to bounce it removing it from combat anyway, though by making the play he would at least be able to block with it another day.

The Canadians smashed right back with Daniel Godfrey's Elvish Branchbender and Leaf Gilder leaving the totals 20-18 in their favor. Post-combat Rich played a Faerie Tauntings, which elicited surprise from his opponents. Leaning in to read one of the Canadian's Faerie cards for the second time in the match, Stuart Wright said "Are you for real?" Hoaen again just shrugged before pointing out it affected both opponents, meaning each play he made on the British team's turn would end in a Shock.

The board positions stood with Hoaen's Faerie Tauntings while his teammate supported with two Elvish Branchbenders, Kithkin Daggerdare, and Leaf Gilder. The British team had Stuart Wright's Lowland Oaf, Blind-Spot Giant, and Soulbright Flamekin after Daniel Godfrey had bounced his Pestermite to pay for a Familiar's Ruse. The match seemed to teeter back-and-forth, with neither team in complete control and both in a position to attack profitably each turn. A Giant's Ire from the British team had made the race tilt slightly in their favor, but the additional 10-life cushion to start the game with made things seem less advantageous.

What was advantageous was the Glarewielder Daniel Godfrey finally managed to draw. That gave his opponents no blockers for the turn, meaning up to 14 damage from the British team's creatures could get through if the Canadians were out of tricks. Considering they were only at 8 life that was very bad, and it only got worse when Wright gave three of his team's creatures trample using his Soulbright Flamekin then, with the eight mana generated from doing so, played a Hearthcage Giant. The Giant put two Elemental tokens into play and allowed the British team to sacrifice them at any point in time to give +3/+1 any Giant on their team.

With no counterspell forthcoming the Canadians had no choice but to play Sentinels of Glen Elendra and hope the British players didn't see that application of the Hearthcage. Unfortunately for Hoaen and Kramer, they did.