Teams Round 4: The Clash

While the Swiss continued to run away with first place, this round saw Japan and the Czech Republic battling out with the handful of other teams hoping to score second place in the standings. One one side, it was Shuu Komuro and Masaya Kitayama of Japan, against Vit Vavra and Thomas Langer for the Czechs. 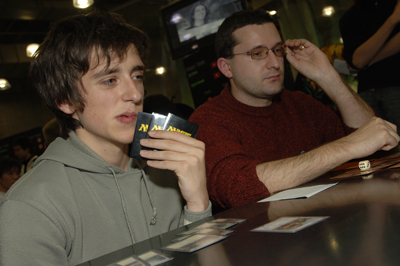 Vit Vavra and Thomas Langer fight for the Czech Republic.In the early game, Japan played it defensive, their early Stonybrook Angler and Mudbutton Torchrunner promoting escalation rather than combat. They spent Broken Ambitions keeping Avian Changeling out of the skies, then further cluttered the board with Hornet Harrasser and Lys Alana Huntmaster.

Vavra's draw was short on action, his side of the board seeing only a Cenn's Heir and a cycled Surge of Thoughtweft. Fortunately, Langer had some business: a Deeptread Merrow and an augmented Paperfin Rascal, and then Summon the School, setting up some serious punishment if Japan kept playing the waiting game.

Japan didn't wait to turn it around. Boggart Harbinger searched up Wort, Boggart Auntie, and then Faerie Trickery got Summon the School for good. Plover Knights ate a Lash Out, but Langer had one for Wort so they were back where they started. Streambed Aquitects threatened to give them another islandwalker, but Faerie Harbinger from Kitayama searched up Amoeboid Changeling to counteract it.

With the Harbinger and the Harrasser, Japan was ready to move to the offense. Paperfin ate the Harrasser, which took out a freshly-played Kithkin Healer, keeping the pressure up. Kitayama let the Czechs get in after he played his Amoeboid Changeling, refusing to go below four open mana. When Japan tried to return fire with Harbinger, Huntsmaster, and Mudbutton, Langer was ready with Neck Snap for the 3/3, keeping Japan's offense to a minimum. The scores were Japan 24 – Czech Republic 20.

Japan added Deeptread Merrow, Lowland Oaf, and Skeletal Changeling to their board. When this second Mudbutton started swinging too, a Merfolk token made the trade. It aimed to take out the Aquitects, but Briarhorn made the save. That and a newly-played Kithkin Daggerdare meant that the Czechs finally had a green light to attack, despite the Angler and regenerator. If only there wasn't that second Mudbutton.

They charged in with Aquitects, Rascal, and Briarhorn. Goblin Harbinger and Mudbutton teamed up on the Rascal and the goblin blew up the Daggerdare on its way out. Vavra played a Kithkin Healer hoping to further whittle down the Japanese offense. Japan swung back with the Harbinger and Oaf, putting the scores to 22–13 in their favor. Kitayama was allowed to drop Glimmerdust Nap on the Aquitects, but Weed Strangle on Briarhorn met Scattering Strobe. Neither clash won and all the cards went to the bottom. 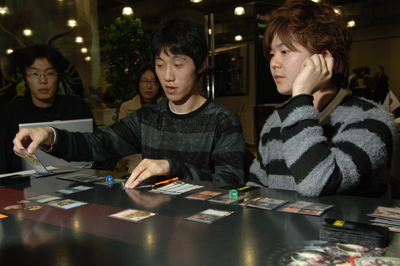 Masaya Kitayama and Shuu Komuro battle for Japan.Langer traded in his sleepy Merfolk for a Changeling Hero, but the Stonybrook Angler meant it was only a small upgrade in attacking power, and would provide no life-gain. They traded blows from Deeptread Merrow on one side and Faerie Harbinger on the other, but the Japanese were adding to their board and the Czechs were not, and time was running out.

In the closing sequence, an end-of-turn Lash Out on Kithkin Healer revealed another Lash Out for Komura. Unfortunately, it also showed Vigor waiting for Vavra. The Czechs brightened. Finally, something going their way. Komuro untapped and Lashed Out at the Briarhorn. This time, the clash revealed Eyeblight's Ending, and the Czechs' faces fell. With their blockers eliminated and short on life, it only took two attacks to finish them off.

At the other Japan vs. Czech Republic Match, however, Martin Juza and Jakub Starek were revengeing their countrymen on Naoki Nakada and Takashi Akiyama, so both teams earned three points on the round.