As the competitors at the Jacob Javits center sat down for the final round of Swiss Teams play they had to realize how much was on the line. That went doubly for the Dutch and Swiss teams as they squared off. The Swiss were almost a lock while the Dutch players needed to win and for Austria, paired against the Japanese behind them in the feature match area, to lose. Anything less and they'd be watching from the sidelines on Sunday.

The Netherlands started with the early advantage as they won the die roll and kept both of their opening hands. Their opponents, in contrast, both had to mulligan, but were satisfied with their second sets of seven. The first creature on the board, however, came from Bucher in the form of Flamekin Brawler. Christoph's first play, a Stonybrook Angler, was countered with Broken Ambitions.

After the first few turns things looked as such: Huber and Bucher were representing blue-white and red-green, respectively. Their board consisted of a Fire-Belly Changeling and Flamekin Brawler for Manuel while his teammate Christoph had just an Avian Changeling. The Dutch team had Roel van Heeswijk playing blue-white while his teammate Robert played blue-black. For creatures they sported a Pestermite and Harpoon Sniper for the blue-white deck while Robert had a Mudbutton Torchrunner.

It didn't take long for the board to really start bogging down as both teams started sniping at each other with flyers. As in Pro Tour–San Diego, the Lorwyn Two-Headed Giant format puts a greater value on creatures with evasion and it looked like both the Swiss and the Dutch had tested enough to figure that out. They had put a premium on flyers as well as landwalkers like Hillcomber Giant. After a Swiss attack, no oxymoron intended, the totals stood 28–24 in favor of Bucher and Huber. Post combat things got real interesting as Bucher used a Mountain enchanted with Fertile Ground to play a card from his white splash: Brion Stoutarm. The legend could certainly put a kibosh on some of the plans of the Dutch players, but Manuel would need to play out some more creatures first.

Robert and Roel didn't have much to follow up with as van Medevoort played a second Mudbutton while his teammate attacked with a Pestermite, then played Harpoon Sniper and Amoeboid Changeling. It looked like the Dutch player's hopes for reaching the finals were sinking, and they were about to get lower. Bucher and Huber untapped and offered up a bomb: Incremental Growth. The sorcery turned Avian Changeling into a 5/5, a Hillcomber Giant into a 4/4, and Brion into a 6/6. The Dutch players managed to trade with the changeling though it cast them a Pestermite and Mudbutton Torchrunner to do so, and after combat the totals were 32–24 Swiss. 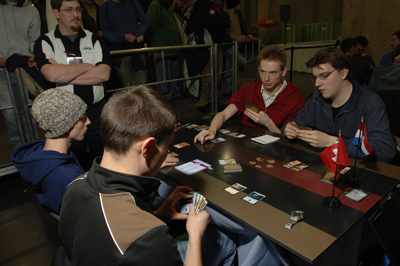 Manuel Bucher and Christoph Huber of Switzerland aim to stop Roel van Heeswijk and Robert van Medevoort from repeating the Dutch victory in 2006.The crafty players from Amsterdam weren't out yet, however, as they untapped and revealed a bomb of their own: Drowner of Secrets. Because of how Two-Headed Giant rules work the two only needed to stall long enough to mill one of their opponent's libraries. When that player was unable to draw a card he would lose taking down his teammate with him and giving the match to the Dutch. The question was whether or not their clock was fast enough. With the Drowner, Amoeboid Changeling, and a Harpoon Sniper in play the two could only effectively mill four cards each turn (three from the Merfolk and one naturally drawn). With approximately twenty cards in either Swiss player's library, that meant at least five turns of milling without using the Harpoon Sniper's effect during combat. The Swiss players, however, were attacking with a 4/4 Hillcomber Giant that was unblockable and had Brion to start chucking spare creatures around. At only 20 life the Dutch players had less than five turns to work with; they needed to draw more Merfolk fast.

A Moonglove Extract from Huber dealt with the Harpoon Sniper, but Roel responded by tapping it to mill a card. Which opponent would he choose to hit? After thinking he opted to get Huber, the blue-white mage. If the Dutch were hoping to race the play made sense. Because Huber was the blue mage he would be more likely to have cards which allow him to draw, things like Mulldrifter, Silvergill Adept, and Fathom Trawl, cards which would effectively play into the Dutchie's game plan. By milling Huber, then, Roel potentially created more dead draws for his opponent and/or stranded cards in his hand.

The Dutch players added to their cause by Æthersniping the Hillcomber Giant back to Christoph's hand. That bought them more time to work on milling Huber and nullified the +1/+1 counter from Incremental Growth. Not impressed, the Swiss players continued with their plan of winning the old fashioned way and used their opponent's end-of-turn step to pump a Fire-Belly Changeling to 3/1 before sacrificing it to Brion Stoutarm.

From behind the table, good news came for the Dutch: one half of the Austrian team had lost to their Japanese opponents.

Back within their own game Dutch opponent Manuel Bucher drew his card for the turn, then began giggling and motioning to his teammate. The peanut gallery tensed for some sort of bomb to hit play but Manuel simply calmed down and played... Soulbright Flamekin? With the Flamekin Brawler he played on turn one still sitting on the board, and Brion as hungry as ever to chuck creatures, the gallery slowly realized just why Bucher thought the card was so funny. The eight red mana he could now make doubled the amount he otherwise had access to and the Dutch squirmed in their seats just a little. At the end of the turn they verified how many cards were in Huber's library (seventeen), then milled him. Unfortunately they were down to just a Drowner of Secrets in play as the two Swiss players had managed to deal with both of Roel's other fish.

Huber and Bucher decided to go for it. At the end of their opponent's turn Bucher targeted Christoph's Æthersnipe to gain trample with his Soulbright Flamekin. He then repeated the process again, but on the third try Van Medevoort had a response. He made Makeshift Mannequin targeting a Mudbutton Torchrunner in his graveyard. With two Lowland Oafs on the board he would be able to target the Mudbutton immediately, nullifying Bucher's attempt at an 8-point Brion hammer to the heads of the Dutch. Fortunately for Manuel his teammate was playing Islands and had Faerie Trickery. The Brawler was successfully chucked and the totals were 46-6. Untapping, Bucher had yet another strong play as he drew a Primal Command and quickly played it.

The game stalled for a moment as the Dutch players took in the situation.

"Nice," was all Roel could muster, adding, "Well, we knew you had something. You keep giggling."

The modes chosen were for Huber to reshuffle his graveyard into his library, essentially resetting the Drowner of Secrets clock, and for Bucher to search up a creature. The choice? None other than the 7/7 Cloudthresher. The Dutch players finally managed to find an answer to Brion in the form of Shapesharer, but Bucher had a response: he made one last sacrifice of his Soulbright Flamekin, putting the Dutch to 4. After untapping Bucher played the Cloudthresher. The Dutch moved to put their totals to 2 before Huber pointed out the Elemental would deal 2 to both players, killing them. Hearing that news the Dutch hesitated again, surveying the board. When it became clear they were on the precipice of defeat with no answers available, they asked their opponents if they were willing to concede to them, giving them the chance to play in the Finals as well.

"Mmmm... no. Sorry. No concede." –Christoph Huber, with an apologetic shrug