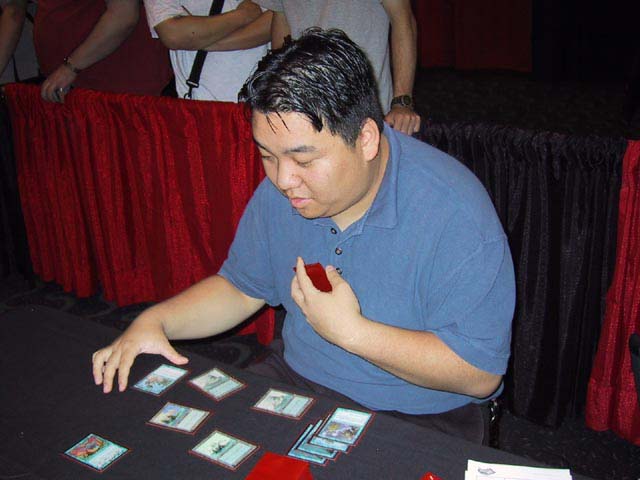 Terry Tsang went on a tear on Friday, going 6-0 in the draft portion of this weekend's tournament. When asked about the key to his success, Sigurd Eskeland butted in, "Because he's busted! He's been practicing with Sigurd!" Terry then explained in his own words, explaining that he had been testing with a lot of good players and "Just drafting the set a lot". The 24 year old resident of Burnaby (a suburb of Vancouver) recently graduated from the British Columbia Institute of Technology, with a degree in Computer Science. He explained that his studies had kept him away from playing Professional Magic. "That's why I skipped all those Pro Tours this season. I needed to graduate." Terry also added that this decision was made partially to keep his father happy.

With his education completed, Terry has been able to refocus on the Magic game. He has had his share of success in the past, placing Top 8 at Pro Tour Secaucus in 1999, and was a member of the Canadian National team in 1998. Needless to say, he is no stranger to winning, and his undefeated start on Friday showed that he can still get the job done. As far as his chances today are concerned, Terry seems to be optimistic. I asked him about his matchups in the Top 8, and he joked, "I'm going to win! I'm going to smash the Fires guy, beat the Cavern Harpy guy, and beat the Counter Rebel guy!" Speaking of the "Cavern Harpy guy", Terry isn't scared of the deck that has become the talk of the weekend. "I tested against it, and went 8-1 . . . I am not fearing the Cavern Harpy deck".

A factor that makes today's Top 8 more interesting is that it will decide the Canadian National team. With Worlds being held in Toronto, the idea of representing one's country on home soil is certainly an intriguing opportunity. Many competitors and spectators present in Ottawa this weekend have noted that with such a strong Top 8, the Canadian National team could be a favorite heading into Worlds. Terry agreed, stating "If it's me and Gary or Elijah on the team, we should be the favorites". Aside from national pride, there are other benefits to defending your country's honor at home. "It'll be a lot easier . . . we'll be able to sleep in our own beds. We won't have to sleep in hotels"