Texas Boys Do Good, y'all! 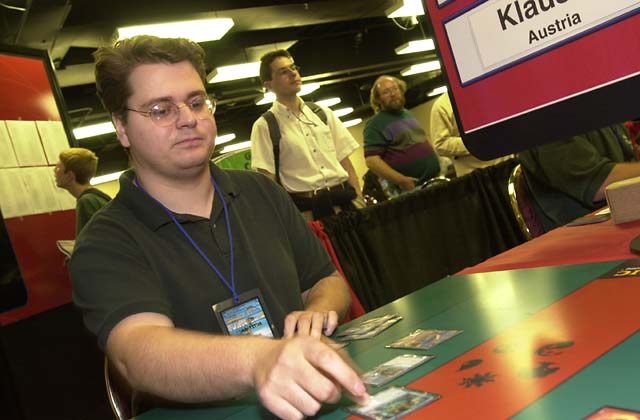 For as long as the Pro Tour has been around, it has been dominated by the Northern half and West Coast of America. Since George Baxter left the game, few Texan players have been able to establish a winning streak long enough to put Texas Magic on the map. On Day One of Pro Tour Los Angeles, things changed. Some notable Texan players came up with performances that beat the odds against them - David Williams, from Dallas; Bryan Hubble and Ben Romig from Houston, and Adrian Sayers, Jeff Clark, and Jonathan Pechon from Austin; all enter day two with a combined record of 35-7.

David Williams is fairly well known among Pro Tour players and money drafters alike. His style of play is based as much on his temperament as his undeniable skill. David's first draft didn't go well for him - he ended up 1-2. His second draft was best described in multiple choice format. Was it A) Sick. B) Savage. C) Retarded. D) All of the Above. The answer is of course D. David had ten direct removal spells, 3 of which were Soul Burns. His creatures were fast efficient little monsters like Rogue Kavu. In his final round of the day to complete his 4-0 sweep of his table, Rogue Kavu did all 20 points of damage to his opponent to seal his victory. David moved to 5-2 and 64th place. His tie breakers are awful, but if he can draft another monster deck like his last, he won't need tie breakers to find himself in the Top 8. If any player is due for a Pro Tour Top 8, it's David.

Also at 5-2 we find Bryan Hubble. His only losses have come against players he's likely to see in a Texas area Pro Tour Qualifier - Ron Schubert from Oklahoma, and Jeff Clark from Austin. Bryan is a member of the mostly defunct AustiKnights, though I think it's more appropriate to say he's part of the global internet Magic community. Bryan can be very creative in his deck building strategies, as shown by his piloting of a mono-red deck to Day 2 of Pro Tour Chicago '00. Bryan has been in a solid position to make Day 3 before, though, and his luck didn't hold up. Hopefully, that will change soon. 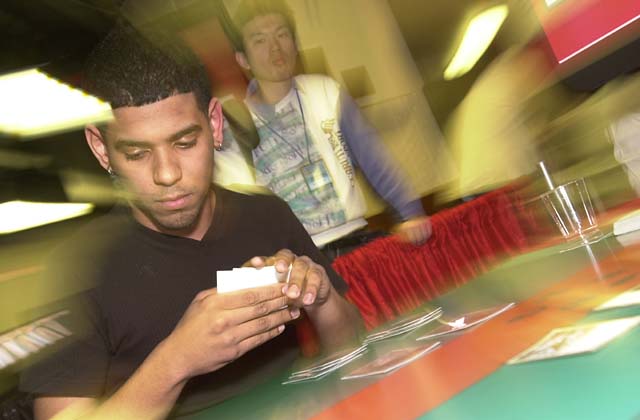 Ben Romig, affectionately known as "the Giant" in Texas, both for his tall stature and big heart, finds himself comfortably at 6-1. Ben's single loss comes from a penalty. Ben bought new sleeves and then when deck checked, was had sleeves that were marked sufficiently enough for him to receive a penalty. Therefore, the one lost match. I doubt he had even looked at the sleeves, or noticed any kind of discernible pattern. Had he, he certainly would have changed sleeves. His preference is to "mise Pro Tours" by good play and good beats, not by any shenanigans.

With a combined record of 19-2, the Austin triumvirate of Jonathan Pechon, Adrian Sayers, and Jeff Clark are a force to be reckoned with. The best part of this is that the three are friends, and draft weekly at Pechon's apartment. Adrian's performance in the apartment Rochesters has been miserable, but he still showed that he learned something, finding himself at 7-0. He's drafted a white/green deck and a black/blue deck. He didn't enter the drafts with a preset deck in mind - he simply wanted to draft the best deck that came to him that fell into the realm of green/white or black/blue or black/red. Jonathan also favors those color combinations, though his second draft deck was three colors. His record of 6-1 puts him at an exceptional draft table, with Jon Finkel, Robert Dougherty, Tim McKenna and Scott Johns. Jonathan was actually excited about this table, since his preference is for green/white, and the four above-mentioned players tend to prefer the other end of the spectrum entirely. Jeff Clark is a recent Houston to Austin transplant, but his game hasn't suffered by moving to Austin - in fact he drafts more now than he ever could have in Houston, and with a higher quality of opponent to learn from. His record reflects what he's learned, with a solid 6-1 joining him with Sayers at the top table. Both of Jeff's decks have been blue/black, and upon review of Adrian's 4-0 blue/black deck and Jeff's 6-1 decks, I've found the card that brought these guys so much success. What is this powerhouse? Multiple Agonizing Demise? Reckless Spite? Phyrexian Infiltrator or Stalking Assassin? 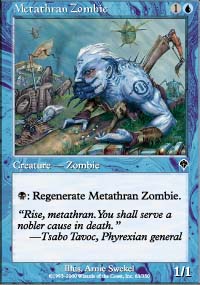 Each of those decks have at least 2 Metathran Zombies in them, and the more I think about it, the more I realize how underrated the little 1/1 regenerator is. The key to one form of black blue is aggro-tempo control. Vodalian Zombies, Urborg Stalkers, Tower Drakes followed up by Duskwalkers and Recoils and Repulses to evade pesky blockers. Another form of the deck is similar to Major League Baseball team the Chicago Cubs. The Cubs offensive lineup is based around getting good runners on base and then letting Sammy Sosa come to the plate and win the game for you. That's similar to the second style of drafting black/blue - use Metathran Zombies get on base for you and keep you in the game, until you draw cards like Goham Djinn or Duskwalker that can hit home runs.

Another reason that the Zombies are so good is that against a red/black attack deck, they're more than just blockers who regenerate - they can also take out Viashino Grapplers and Urborg Phantoms. The Austin crew discovered the power of the Zombie on the floor off Jonathan's apartment, and it's brought them to the top tables of Pro Tour Los Angeles.