They’re Alive! – Robot Chicken and Phyrexia vs. the Coalition

Robot Chicken is a show that combines chaos, action figures, and hilarity to keep gamer-centric personalities rolling on the floor with laughter. But it turns out that behind all the pop-culture references, the action figures, and the chaos of their writers’ meetings, the staff at Robot Chicken are big Magic fans. In fact, they’re here at Pro Tour–San Diego to play against fans of the game in the Champion Challenge. I sat down to chat with them about Magic. 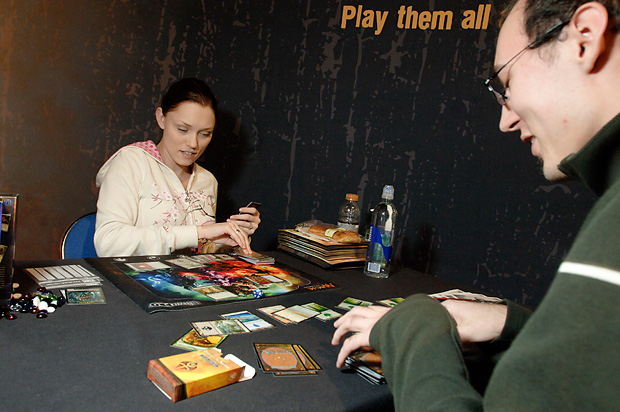 Clare Grant is one of the voice actors for Robot Chicken. Fans might recognize her from $5 Cover on MTV, and the Memphis native has also received awards for her part in the Star Wars fan piece Saber. Joining her for the interview was Hugh Sterbakov. The Emmy-nominated creative force is also the toy buyer for the show, and something of a Spike when it comes time to play cards. Mike Fasolo wears many Robot Chicken hats serving as a writer, director, and voice actor on the show. He has special ties to the Magic world where he started off working at Inquest magazine, a publication that focused on the TCG industry and primarily Magic. Finally, Doug Goldstein, the Emmy-nominated co-head writer of the show, also sat down to share his thoughts on the game.

So, how did the staff from Robot Chicken come to the game of Magic? “I started playing in 2001,” Clare explained. “I saw the cards and it looked like something I’d like to play. A boy I knew said, ‘I’ll teach you!’“ 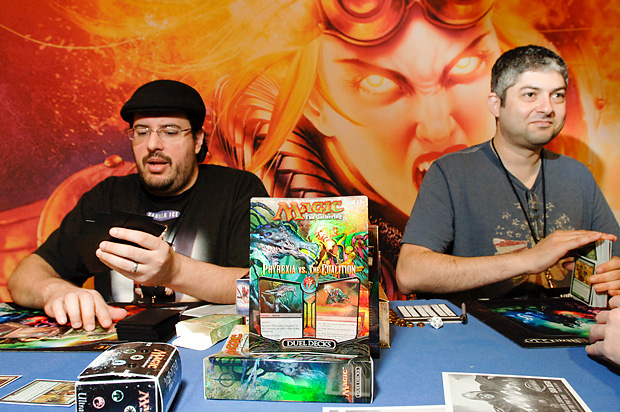 Robot Chicken‘s Hugh Sterbakov, left, and Doug Goldstein are both longtime Magic fans, along with several other staffers.

Mike credited his time working for an actual gaming magazine with introducing him to them. “At Inquest they constantly needed people to help them play games. I played then, and kind of stopped for a while. I had to relearn in the past two weeks at Hugh’s house to get ready for the Pro Tour.” Hugh jumped in to tell stories about some of their games, and the frenetic pace of conversation between the four participants painted a picture into what the writer’s room at the Robot Chicken offices must be like: hectic, chaotic, and topped off with plenty of laughs. 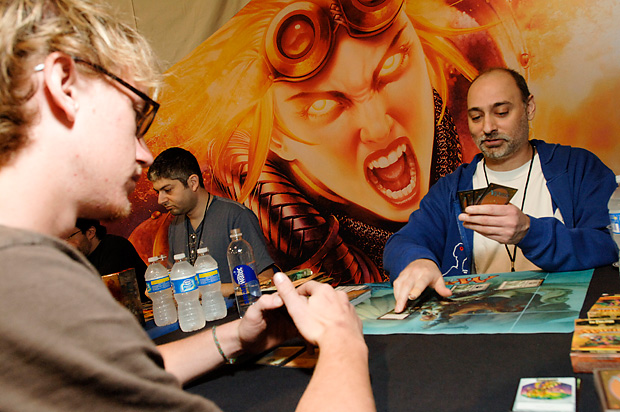 Clare and Doug both detailed how two groups of staffers exist within the Robot Chicken offices: those who play Dungeons and Dragons, and those who play Magic. “I’m the only ambassador between the groups that plays both,” Doug added before being interrupted by Clare, who exclaimed, “But we all play video games!”

It was digital gaming that actually brought Doug back to the game, and he who spread the gaming fever to his coworkers. “I played during The Dark, but sold all of my cards to buy a big screen TV. Then I saw Magic had been ported to the Xbox [as Duels of the Planeswalkers], and I decided to try it again. I was addicted.”

Doug’s return to playing got the rest of the group involved. Hugh commented on the challenge of group play dynamics. “It’s always everyone against me,” he said. “I always figure out the decks, like Slivers, or Elves. Then they always gang up on me to take me out, so I have to be one step ahead of them with a new deck every week.”

Clare agreed. “I’m always trying to build a deck to beat his, but then he plays something different and I’m two steps behind!”

Had any of them tried tournaments before? “I used to play Prereleases,” Doug said. “It was always a lot of fun. Sometimes you’d see seven-year-olds just destroying everyone. But I never came close to winning anything!”

Hugh had also played in a Prerelease, and more recently. “I just played the Worldwake Prerelease for the first time.” Clare and Mike were new to the tournament environment. Said Clare: “I’m intimidated by the pros!”

The entire group seemed blown away by the atmosphere of the Pro Tour. Trying to come up with a means of describing how exciting the experience was, Doug offered this analogy: “It’s like swimming in a bowl full of M&Ms.” 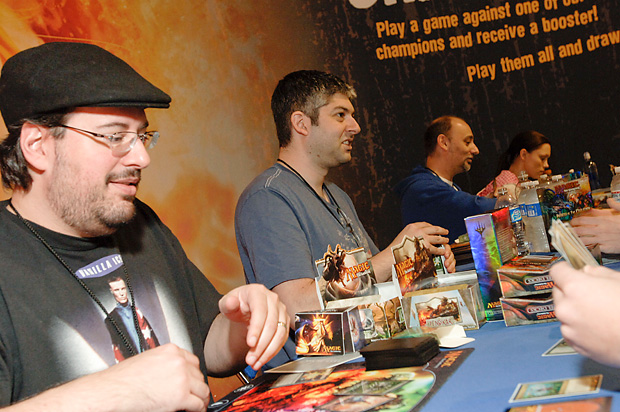 An onlooker piped up with a suggestion: “Do you mean Baneslayer Angel?”

At the very mention of the popular Magic 2010 mythic rare, Clare’s eyes lit up. “Yeah, that’s the one! Baneslayer Angel! I have one of those!”

Hugh was also a fan of the flyers, though his fav was of the darker variety. “I’d take Vampire Nighthawk. All those abilities for that cost? It’s awesome in my Vampires deck.”

More reticent to select a single card as his favorite, Doug offered up a favorite strategy instead. “I don’t really have a single favorite card; I find a card I really want to build a deck around. Right now it’s Where Ancients Tread. But I build one deck, then find another card I like, then abandon that deck to build around the new one.”

The chaotic discussion came back under control as the crew was corralled to head off to the Champion Challenge tables to try their hand at playing Duel Decks: Phyrexia Versus the Coalition in its world debut. It’s an exciting opportunity for players and attendees at the Pro Tour to meet some of the people responsible for bringing them their favorite TV show, but Hugh saw it in a different light.

“All these people keep coming up to me and saying ‘Hey, I love your show, you guys are awesome!’ And I just keep thinking, ‘Ha ha, suckers. I’m having way more fun! The Pro Tour is just so cool.’“

.... What’s that? Oh, you want to hear about the new Duel Decks too? So greedy. Lucky for you, this reporter was willing to double dip as well: interviewing the Robot Chicken crew and scoping out the brand-new cards for the first time? What an assignment. 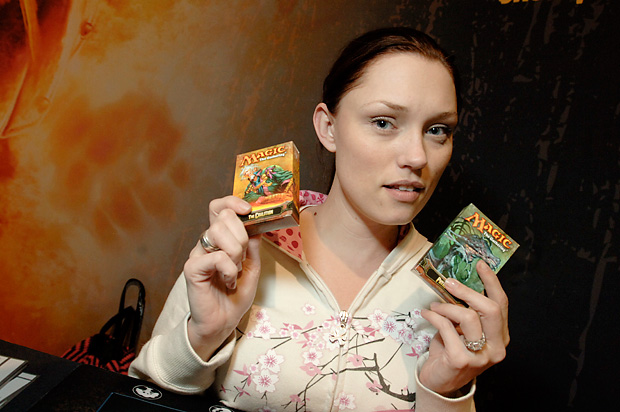 Clare shows off the new hotness.

In the product announcement that declared the Duel Decks “coming soon,” Duel Decks: Phyrexia Versus the Coalition was billed like so:

Relive the most epic battle in Magic: The Gathering history.

The scourge known as the Phyrexian plane of Rath has been overlayed upon Dominaria. Single-minded and with an unyielding goal to eliminate all in their path, the mono-black Phyrexian army is filled with a variety of efficient killing machines.

For Dominaria, victory is the only option. The Coalition, representing the five colors of Magic, has united under the leadership of Gerrard Capashen to combat the Phyrexian invaders.

So, what did I see when I wandered over to the gunslinging tables? Besides a lot of people having a lot of fun, it looked like there were some sexy cards coming back in the special release. A Phyrexian Processor, complete with new art, was busy cranking out tokens to beat down poor Hugh Sterbakov. The writer and Emmy nominee seemed to be no match for the powerful 10/10 Minions stomping at his gate. Adding insult to injury was a Whispersilk Cloak, making it impossible for him to block one of the gigantic tokens.

“I put that card in all of my decks!” he cried, bemoaning his fate at the turncoat equipment being wielded by the hands of his pack-thirsty fans. Still, he had an ace up his sleeve. “I’ve got all these legendary Dragons ....” What looked like a Treva, the Renewer and a Rith, the Awakener waited patiently for their chance to shine in Hugh’s hand.

Looking for more hot leads than just what they had on the table, I asked both Hugh and his opponent what cool cards they had seen. “Um, he has some huge creature, like a 10/10, but it doesn’t untap,” said Hugh.

“Yeah, but I have to pay 8 life or something to untap it.” His opponent continued, before adding excitedly “Oh, but I have another thing that is an artifact and can untap it!”

“Yeah, that combo is totally sick,” said Hugh, before trying to figure out which Dragon he should cast. The descriptions sounded suspiciously close to Phyrexian Colossus and Voltaic Key.

I left those two in search of a match with a more complicated board position so as to see more cards, and quickly found it as Mike Fasolo was facing down two people at the same time: a husband-wife team trying to score a pack off him by beating his Coalition with their Phyrexia. “I wanted to teach her to play, so here we are!” The husband said with a huge grin.

His partner in crime looked less excited about her chances. “I don’t want to attack that!” she said, pointing at a green creature on Mike’s side of the battlefield. A Yavimaya Elder blinked up at me innocently. It may have been years since Urza’s Destiny came out, but that pesky 2/1 is still not something you want to send to the graveyard if you can help it.

“Tell him about Puppet Strings!” Encouraged her husband.

“Oh yeah, her Puppet Strings have been holding down my Treva the whole game!” Mike gushed, oddly excited about a card that seemed to be holding him back. Tendrils of Corruption had been a big hit for the husband-wife team too, and they couldn’t speak highly enough of Sanguine Guard and Phyrexian Gargantua. As for Mike?

“I liked this one, but she killed it right away!” he said, holding up a Gerrard Capashen.

Duel Decks: Phyrexia Versus the Coalition is set to be released March 19th, and you can find the official announcement about it here. Robot Chicken airs on Adult Swim (check local listings for dates and times).