Things are Looking Up for Princess Buttercup

Sitting pretty at 10-0, it's not farfetched for Rob Castellon, playing in his first Pro Tour, to start thinking about a Top 8. Not that he would.

Castellon, a judge out of Maine, is relaxed and calm even after playing on camera against World Champions, Pro Tour Champions, and in some of the tightest matches I've ever seen. And he's won them all.

But he's decidedly nonplussed about the whole experience. He shrugs and smiles and genuflects when asked to reflect on his success so far. He seems equally excited to show off his admittedly sweet tattoo of the judge Balance art as he does his deck. He even uninstalled Facebook from his phone because he was receiving too much attention from friends as he's climbed his way to the top of the standings.

"And now I'm trending on Twitter, whatever that means." 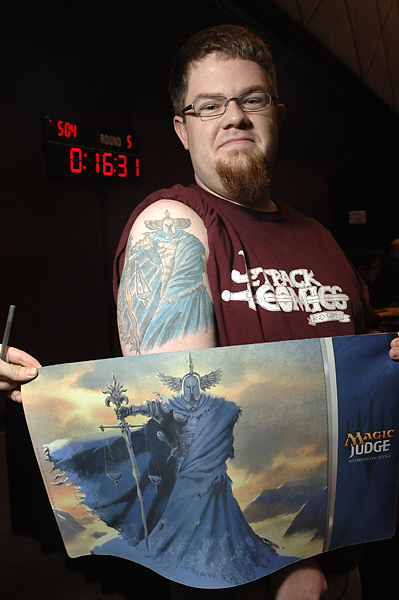 Rob Castellon, Level 2 Judge, sports a tattoo with the Balance judge art, a nickname that may raise an eyebrow, and a stellar Day One performance at the first Pro Tour he's ever participated in.

What it means is that the Magic community is just as surprised to see Castellon here as Castellon is. Though he's played Magic since Alara Reborn and is well-known in judge circles, his high-level playing career is, well, limited.

In fact, Castellon being here is something of a quirky story. Planning to judge for a PTQ in New Hampshire, Castellon got into town only to realize that he hadn't responded to the Tournament Organizer's email and wasn't going to be on staff for the Modern qualifier. So, the night before the tournament, he brewed a White-Blue Control deck that went hard on the control elements—Sun Titan, Sphinx's Revelation, Kitchen Finks, and the like—and eschewed popular choices like Geist of Saint Traft that often define that color combination.

Then he won the PTQ. Those were the first 10 matches of Modern he had ever played, in just the sixth PTQ he's ever played it. It wasn't exactly how he planned the weekend to go. Instead of judging a local tournament, he earned a trip to the Pro Tour.

Still, he attributes much of his success to how he judges. As even keeled as he is on camera, he's even more so when judging.

"When you're judging, you can't flip out or go on tilt, while when you're playing, any number of things can set a player off."

Unless you're Castellon. At the PTQ, for instance, he mulled to four in the Semifinals and kept his cool, winning the game on his way to winning the tournament. His opponent, on the other hand, was tilted by the loss and didn't recover in time.

"I really like judging, it's a lot of fun. There's none of the highs and lows that there are at playing. You're never going to have a tournament like I'm having now."

To be fair, rarely does anyone have the kind of tournament Castellon is having now. As the lone remaining 10-0 player, players are clamoring for his secret sauce.

Besides his now trademark coolness, his secret seems to be his unique four-color deck crafted together with his brother, Mike. Having tested with a number of decks, the brothers found they liked the Borzhov midrange deck, except they could never beat Mono-Red. So they knew they wanted access to green mana to make Centaur Healer and Saruli Gatekeepers work. But they also knew they wanted red mana for Sire of Insanity.

So why not play all of them? And, while you're at it, throw in some sweet Deadbridge Chants, a card Castellon says is both underrated and one of the most powerful cards in the format.

His four color midrange deck (no blue) has been the talk of the tournament so far. Former World Champion Uri Peleg, while losing to the deck on camera on Day One, kept talking about how much he liked the deck.

One of the most surprising cards to see this weekend has been Deadbridge Chant, a card that helped Castellon remain as the only 8-0 player going into Day Two.

Peleg, interestingly enough, was playing a straight Azorius deck to keep consistent mana. During the game, he stumbled on blue mana a bit. Castellon's four color deck, on the other hand?

"The mana has been perfect," he said.

One casualty of the four-color mana base, however, was Obzedat, Ghost Council. Even Castellon's "perfect" mana base couldn't support WWBB.

Besides, Castellon said, Blood Baron of Vizkopa is just better.

"I don't know if you've ever scaveneged a Deadbridge Goliath onto a Blood Baron before, but I have."

The only card Castellon is really scared of, he said, is Ætherling, a card he said he can't beat if he doesn't draw Pithing Needle or catch it with Slaughter Games. In fact, Castellon said he would Slaughter GamesÆtherling first even if he knew his opponent had Sphinx's Revelation in hand.

On the draft side, Castellon favors Simic-flavored decks, having drafted BUG and RUG in both drafts. His RUG deck started with two Species Gorgers and, basically, never looked back.

But even as he grabs win after win after win, he hardly seems phased. Chances are, much of that is due to his fellow judges keeping him grounded.

In fact, it was the judge community that dubbed him Princess Buttercup in the first place.

"After GP Orlando, everyone was ordering these giant steaks and I saw they had Shark Steak on the menu. I had never had it before, so I ordered it," he explained. "But it was this small steak that came out on the same sized plate as everyone else's giant steaks. So an L3 from Florida asked 'Do you have enough food there, Princess Buttercup?' And it stuck."

"When I was at Grand Prix Atlanta, I heard 'Princess Buttercup to the stage please.' That's when I knew it wasn't going away."

And this article probably isn't going to make that go away any time soon. Still, thanks to Twitter, Facebook, and his accomplishments so far, he's quickly becoming known another way.