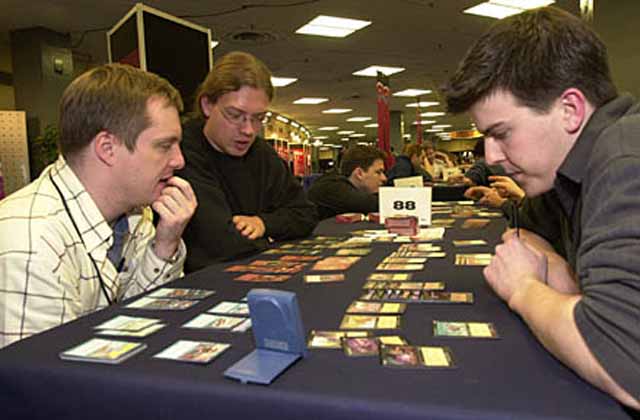 The team cracked open their packs. The cards were not particularly encouraging; there were almost no bombs, and there was remarkably little removal, even in the colors that are normally known for them, like red and black. Among the highlights:

The team arranged the cards by color and by casting cost. The team was not particularly happy with their cards, and they spent a long time debating about how to divide up them up. After a long time discussing the matter, they tentatively decide to divide up the cards into a red/green deck, a blue/black deck, and a red/white deck.

The team continued to debate about which cards to include their decks; for example, they decided to pull a Soul Strings for a second Gush.

Eventually, they settled on their decks. Patrick Mello got the red/white deck, which had an OK rebel chain, including a Thermal Glider, a Volcanic Winds, and two Cho Manno's blessing. Interestingly, Mello decided not to play with the Story Circle, as he said that the deck was aggressive, and that Story Circle doesn't fit in it.

Stephen Valkyser played the blue/black deck with an Avatar of Will, Sever Soul, Stinging Barrier, and Waterfront Bouncer. Valkyser was playing with two Skulking Fugitive, which normally is a questionable card to play, but Valkyser defends his choice by pointing out two facts. First, he is in the "C" spot, and he expects to play a lot of opponents using black; against black, the Fugitive is a very good card. Second, he also has two Cateran Kidnappers, and the Fugitive can be summoned for free with the Kidnappers.

Finally, Christian Luhrs is played the red/green deck. Although it has a lot of good green fat, it has virtually no removal (the red removal got put in Valkyser's deck).

Overall, the Germans felt that these were the weakest cards that they have gotten all day. They didn't really get many bombs, and their cards aren't consistent either. "We hope to go 2-0, like always, but we expect to go 1-1."