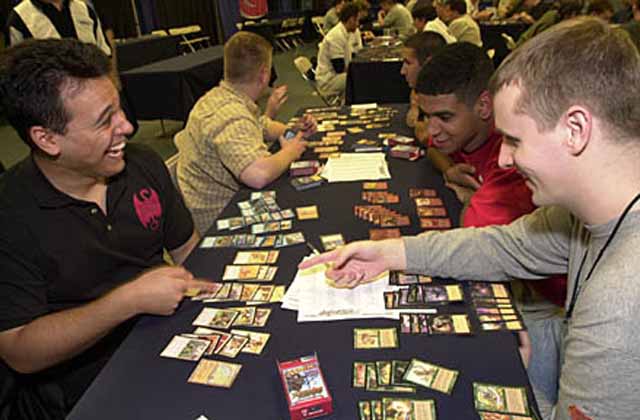 The Fix are in a pretty strong position at this stage of the tournament. They are sitting on 3-0-1 needing only one win out of their next two matches to ensure a spot on Day Two. Obviously, a team of this caliber is looking to finish a lot better than that, and that's what they hoped the decks they received would help them do.

Before they opened their decks Bob Maher made the following comment regarding their construction choices for the tournament so far: "we've done several practice Sealed Decks and in all of them and all of our rounds so far today we've ended up with a White/Blue deck, a Red/White and a Black/Green." When asked is this was intentional he replied "no not at all, we've often tried out various different ways of building decks but we've always found those color combinations to perform the best."

The packs are finally opened and Justin Gary is the first to make any comment as he comes across some Blue Fliers. He opens Troublesome Spirit, Stronghold Zeppelin and Rishadan Brigand and is extremely happy with these bombs telling his team "guys, our blue fliers are just insane!".

Like most other teams The Fix start by removing all of the chaff and sorting the remaining cards by color. David Williams comments "we don't have a lot of red but it's all good". The other colors seemed okay but White and Blue truly stood out. Blue had nearly a dozen fliers, with all of them good, a number of Counterspells and a Coastal Piracy to truly break the deck. White had a Rebel curve up to and inculding a Commander with one of each Glider along the way. The rest of the colors were okay but nothing amazing stands out.

After looking through the Blue cards, Gary noted there are already 21 or 22 playable cards. He asked Dave Williams if they have a Rhystic Deluge in their chaff pile as this otherwise mediocre card is excellent in a mono-blue deck.

With two excellent colors and three mediocre decks, The Fix had a lot of difficulty in deciding how to split up their colors. Maher commented "we might even be able to build four decks but how we split these up is mind-boggling." All the colors have some removal spells but Black and Red have three each. They all agree that they probably should split the Black and Red because of the removal, and they should definitely not split the White Rebels or the Blue fliers as they both form two great cohesive units. White/Black is considered but dropped as Maher felt that it doesn't really have any great creatures. They look at Blue with a Splash of White and that seems okay with 25 good cards. At this point they have taken a third of their deck building time and Gary suggests they make a decision. They initially build Black/Red, Green/White and Blue/White.

All team members continually checked that the other members of the team are happy with their progress, the communication within the team is excellent. After building the decks in the above combinations they looked at them all to see how they are shaping up. The Blue/White was very solid but Maher was unhappy with the Black/Red and the team as a whole felt that the Green/White isn't a 2-0 deck. Already 30 minutes into their construction time, they decide to swap the Red and the White and build Red/White and Black/Green. Once they've put the cards together they immediately seem happier.

Williams felt that the Red/White will have difficulty against Troubled Healer but even then it had War Cadence as a finisher. Apart from that he was happy. Williams initially thinks he had 23 cards but on counting the Team discover the Red/White deck actually had 26 and they need to cut some cards. Flaming Sword, Muzzle and a Laccolith Grunt all get cut to improve the decks curve and get rid of what the teams feel are the worst cards.

Justin Gary was the lucky one of the team as he got to play the Blue/White deck. It was an amazing deck with a dozen excellent fliers and plenty of White damage prevention to enable the deck to race if it needs to.

The Black/Green deck to be played by Maher ended up pretty solid. It had three decent removal, good fatties in the shape of Mungha Wurm and Squallmonger amongst others and some good combat tricks.

Despite all of their changing during deck construction Gary notes that they have still come back to their old combinations of Blue/White, White/Red and Black/Green. All of the team members were happy with their decks and confident that they could go 2-0. The communication within the team and the thought that went into the building the decks demonstrated that all the players were very committed to a great finish in the tournament.