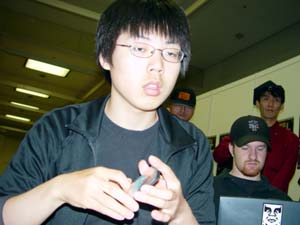 though on the surface this is just a match for third place, it means a lot more than that. The winner will be a member of the Japanese National team at Worlds in San Francisco, while the fourth place finisher will be an alternate. Additionally, members of National teams are guaranteed at least $1,000, so there's a little extra financial incentive to win this match. Shuuhei Nakamura went on a tear during the swiss rounds of this event, and ended up as the first seed going into the Top 8. Unfortunately, there's a chance that his great run may end here, one match short of the National team. His opponent, Shunsuke Kamei, is playing a Blue-White control deck that can give Affinity fits. Between Damping Matrix, Akroma's Vengeance, March of the Machines and the usual control elements, no board will be a sure thing for Nakamura. In order to win, he'll need to get quick draws, and beat Kamei before he can stabilize. On Nakamura's side is the fact that his threats are all cheap and efficient, while Kamei will need time to get his strategy going.

Nakamura had a first turn Chromatic Sphere, and a second turn Ravager, which was Mana Leaked. He played a Welding Jar and a free Frogmite, and Kamei cast Thirst for Knowledge on end step. In response, Nakamura cast Shrapnel Blast to bring Kamei down to thirteen. Nakamura played a Welding Jar, cast Thoughtcast, and attacked with the Frogmite. Kamei cast another Thirst for Knowledge, and Nakamura had another Shrapnel Blast, but this time Kamei countered it with Mana Leak. Nakamura attacked with the Frogmite, and played Thoughtcast. On the following attack, Kamei cycled Decree of Justice to make two blockers, and trade. Nakamura played another Frogmite, and Kamei cast Akroma's Vengeance. Nakamura was left with Glimmervoid, Darksteel Citadel and a Blinkmoth Nexus, and drew a second Nexus. Kamei cycled Decree of Justice to make two Soldier tokens, and Nakamura played an Arcbound Worker. Kamei played and activated Mindslaver, so Nakamura cast a Shrapnel Blast. When Kamei controlled Nakamura's turn, he saw a hand of three Myr Enforcers and Skullclamp, so he couldn't do much damage. On his turn he attacked with the Soldier, and played Damping Matrix. Nakamura played Skullclamp and a Frogmite, and Kamei cast Thirst for Knowledge on end step. He untapped, and brought out Eternal Dragon. A turn later, Nakamura conceded.

Nakamura started with an Arcbound Worker, and played Genesis Chamber on turn two. Ravager resolved on the following turn, and Nakamura played a Welding Jar before attacking with the Worker. A great start for sure, especially considering that Nakamura only had two lands. Myr Enforcer added a little more bulk to his side, as his army kept charging the Red Zone. A Disciple and a Ravager later, and the game was over.

Nakamura had a first turn Skullclamp and Welding Jar, followed by Genesis Chamber on turn two. Kamei cycled Eternal Dragon on end step, and Nakamura's third turn Ravager resolved. Skullclamp went on the Myr token produced by the Chamber, as Nakamura started to gain more resources. Kamei cast Thirst for Knowledge on end step, untapped, and played Wrath of God to kill the Ravager. Nakamura summoned a Disciple, then an Enforcer, and cycled through the Myr tokens with Skullclamp. The Skullclamp then went on the Enforcer, and Kamei removed it from the game with Duplicant. Nakamura played a Worker, and kept going through Myr tokens to find more threats. Kamei attacked once with his Duplicant, and cast Wrath of God. In response, Nakamura sacrificed a Worker to deal five to Nakamura. Since it went through a Chromatic Sphere, the Disciple's ability occurred as well, bringing Kamei down to seven. Nakamura took his turn, and played a Sphere along with another Jar. Kamei cast Thirst for Knowledge on end step, untapped, and played Exalted Angel face down. On end step Nakamura sent a Shrapnel Blast to the dome, and had another on his turn to deal lethal damage.

Kamei decided about his opening hand for a bit, before deciding to keep it. With the help of a Chromatic Sphere, on turn two Nakamura played two Frogmites and a Disciple. Kamei cycled Eternal Dragon, and played a Damping Matrix. Nakamura played a Welding Jar, and attacked with his team for five. Wrath of God cleared the board, and Nakamura responded by sacrificing a Frogmite to Shrapnel Blast. Nakamura attacked for one with a Blinkmoth Nexus, and Kamei played March of the Machines, causing Nakamura to lose everything except Glimmervoid and the Nexus. The Nexus had to make itself into an artifact to keep the Glimmervoid around, stunting the mana situation further. When Kamei played Exalted Angel, Nakamura conceded. 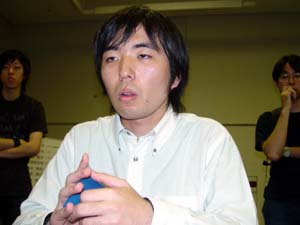 Nakamura curved out with a Worker and a Ravager. He then played Thoughtcast on turn three, and Skullclamp was Mana Leaked. Nakamura played a second Worker, and sacrificed both to make the Ravager 6/6. After some thought, Kamei played a Damping Matrix. Nakamura took some time to contemplate responses (sacrificing lands to the Ravager), and went for broke by sacrificing two, leaving him with just a Glimmervoid and an 8/8 Ravager. It attacked for eight, and Nakamura played a Nexus. Wrath of God killed the Ravager, and Nakamura untapped, playing another. Kamei cast Pulse of the Forge to Nakamura's dismay, as the lifegain spell went back to Kamei's hand. Nakamura's Nexus and Ravager attacked for three, and on the following turn just the Ravager attacked. Kamei went down to six, then back to ten thanks to the Pulse on end step. With three mana remaining, Kamei cast Thirst for Knowledge. Nakamura started to mana burn in order to nullify the Pulse as best he could, and attacked again with the Nexus and Ravager. Not much progress was being made, and March of the Machines put Nakamura into an even worse situation. He was left with only Glimmervoid, the Nexus and the Ravager, and Kamei even started attacking with his Matrix. Nakamura played a Disciple, and attacked for one with the Ravager. Kamei cast the Pulse and didn't mind having a life total above Nakamura's, since he was in firm control of the game. At this point, Decree of Justice did the rest.