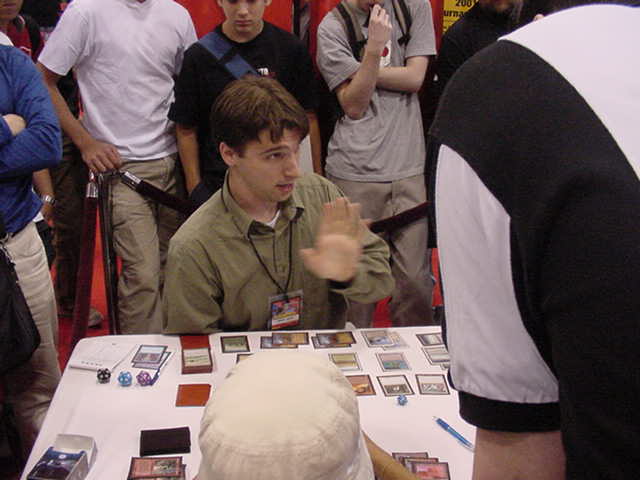 Going into the third day of the event, Tom Guevin was playing the potent Oath of Druids deck, with Wild Research, taking this particularly well-respected Extended deck to the table in hopes of doing well enough to make money here at Worlds. However, unfortunately, Tom Guevin has brought many things to the gaming table today, including a couple mistakes.

Among other things, Tom made a decision to sideboard in his Sacred Ground versus Sligh, under the impression that it would save his Treetop Villages and Faerie Conclaves from destruction via red burn spells. A loud and raucous argument ensued as Tom tried to argue his case, but Tom is not even close to the unstoppable force required to budge the immovable object that is "Sheriff" Collin Jackson. Tom argued that the man-lands are destroyed by the red spells and therefore should return to play via Sacred Ground, but Colin told Tom with no room to wiggle out that it was in fact "the rules of the game" that killed the lands, and his "combo" has never worked, nor would it today.

Later in the round, Tom made another blunder, attempting to cast Gaea's Blessing on himself with Ivory Mask in play. Tom argued his case, asking to see "what, exactly, Ivory Mask said." With there being no errata on Ivory Mask, the competent judging staff showed Guevin his own card, to which he remarked, "I'm looking for data here, and that's not it." 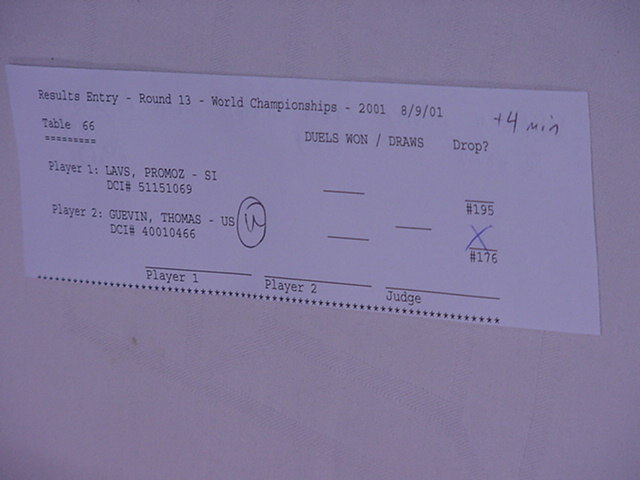 With five extra turns in which to kill his opponent, Tight Tommy had to figure out how to work around his opponent's two Scalds and scads of burn spells and kill him to not lose the match 1-0 on time. While those spells would never get past Tommy's Story Circle, Circle of Protection: Red and Ivory Mask, they could sure target whatever Tommy tried to win the game with, short of a Morphling, who had been removed from the game earlier to fuel a Force of Will. With the mana given, Tom decided that the only way he could win would be to use Wild Research to fetch his Gaea's Blessing, then use the Blessing in an attempt to draw the Spike Weaver, one of the two cards remaining in his deck. Let's just leave it at, it's a good thing he didn't try.

Given the many different things about his deck that just didn't work the way he thought they did, Tight Tommy Guevin's match result slip had an 'X' in the drop section before there was any result for the match itself...