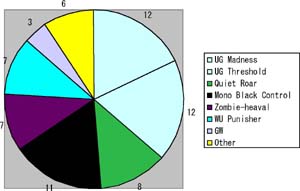 Given that it is taking place only one week after Worlds, it was to be expected that the field at Sapporo would be influenced by the results of the World Championships. As it turned out, UG was the most popular deck type, with exactly half of the Day 2 competitors running some version of that color combination.

There are three basic variants on the UG deck: the madness version, the threshold version, and Quiet Roar.

12 players are running the madness version, including Satoshi "Hatman" Nakamura. Another 12 chose to play the threshold build, among them Tomohide Sasakawa. Finally, 8 players are running Quiet Roar, which was believed by most to be the optimal deck before the tournament began. Many pro players—Akira Asahara, Masahiro Kuroda (undefeated Day 1), Masahiko Morita—have chosen to play this deck, which gets its name from the key Quiet Speculation/Roar of the Wurm combination.

The second most-popular deck type is black control, which was first popularized at PT Osaka, and, along with UG, defined the field at Worlds. The introduction of Judgment has done little to change this deck, which uses Diabolic Tutor to fetch powerful cards like Mutilate and Mind Sludge. Reiji Andou, Ken'ichi Fujita, Osamu Fujita (undefeated on Day 1), and Tsuyoshi Fujita are among the players using this deck type.

This powerful deck combining Upheaval and Zombie Infestation burst upon the scene at Worlds. However, after its splash at Worlds, most players are prepared for it, lessening its impact on the field. In the end, only 7 players using it made Day 2.

Another new deck that is attracting a lot of attention is Punisher-White, played by Tomi Walamies at Worlds. Kentarou Yuasa and Itaru Ishida are among the 7 players using this deck on Day 2.

In addition to the above deck types, there are a handful of others, including WG. Katsuhiro Mori is running a WG deck, but seems to be having trouble navigating the sea of blue that Day 2 has become.