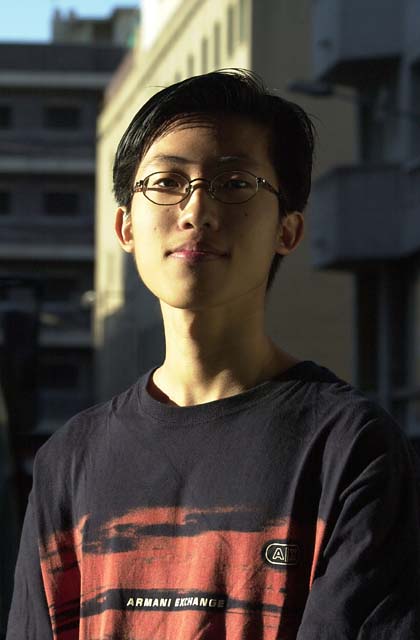 Readers with a keen eye for names might remember Albertus from the last Pro Tour. In Tokyo, he fought his way to a very respectable 13th place and came out to Barcelona to prove that it was no fluke. After his great result in a Constructed Pro Tour, he showed everyone that he can handle Limited as well by reaching Barcelona's Top 8.

This great results led some viewers to dub the nineteen-old Singaporean the "Asian Kamiel" despite the fact that Albertus is in his fifth major event, including a Worlds' presence. He is currently studying Accounting at Nonyang Technological University.

He had little time to practice for the Pro Tour, since he was concentrating on Rochester Draft for the Singapore Nationals. He only had time for a couple of practice drafts and had to come up with a drafting strategy during the Pro Tour. When you don't know what to do, you just learn from the guy sitting right next to you.

"In the first pod, I was sitting right next to Mattias Jorstedt and when he gave me a second pick Probe I knew that was the way to go. The Blue eventually dried up but I started getting some many good Black-Red cards that I merely splashed for two Blue cards."

His highly-reactive strategy, that he plans to use once again during the Top 8, led to some awkward situations: "During these two days, I never used a card I took with the first pick of the first pack." It will be interesting to see how he pairs up against the former World Champion, Kai Budde, who has surely put a lot of hours into his preparation and has a very structured drafting plan. Knowing that he will be matched up against Kai takes some of the glint from Albertus's eyes. "I feel very nervous, but also very excited." He already played against Budde in this Pro Tour defeating him in the Feature Match pit in the 13th round.

Day 1 started with a pod that he totally dominated, going 4-0, followed by a 2-1 on the second pod, this time with a Blue-White splash Green deck. The single defeat still rings in Law's voice when he explains the situation: "I had to take a double mulligan against a Finnish guy in the last game and he rolled right over me before I could come back."

His third loss was surely the toughest one. After winning the next two rounds, Albertus was hoping to get paired against Patrick Mello, who led the Swiss going into the last round. He thought he could easily get an intentional draw from the German. Instead, he got paired with the American they call the Slug: Dan Clegg. Dan took a long time to decide if he should accept Law's draw offer but finally decided to play. Albertus lost that round and walked around the site, supported by his friends, nervously waiting for the final standings.

He was too shaken to calm down and do the math himself, so he couldn't know that he was almost certainly in. When his name rang in the loudspeaker, Asian players erupted in a loud cheer only matched by the Your Move Games' roar when Chad Ellis snatched the eighth slot.

With a big smile, he shyly told us that he has no big plans for the prize money but he will probably treat his friends to night out in Singapore to share the joy of his great weekend in distant Barcelona. "This weekend has been great so far and I feel incredibly fortunate about my result so far."