Back at U.S. Nationals, we consulted some pros and asked for predictions regarding how the Top 8 would play out. For the most part, these predictions came true. Josh Wagener and Gabe Walls met in the finals, although Wagener managed to win what was supposed to be a terrible matchup in a clean sweep. While the brackets and matchups for the Top 8 of U.S. Nationals were fairly straightforward, talking to people around the convention center with brackets and decklists in hand has yielded no clear picture as to what we should expect tomorrow. Here's a rundown of the pairings, and some of the talk revolving around them: 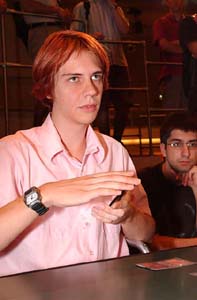 Advantage: NieminenGabe Walls has been lamenting this matchup to anyone who will listen, and is seemingly trying to convince everyone that he doesn't have a shot.

While it's true that Slide is primarily geared to handle creature decks, in a best of five series, having a sub-optimal maindeck isn't nearly as bad as it would be otherwise. Indeed, Walls' sideboard may prove to make all the difference. Obliterate is likely to be the key spell in the match, as the Wake deck needs all the mana it can get. This should make things especially interesting, as Nieminen may hold back lands in preparation for the uncounterable reset button. This is likely a necessary strategy, but it limits his options and cuts away some of the deck's strength. Post-Obliterate recovery isn't horribly difficult for Nieminen either, since Obliterate won't take Mirari's Wake off the board. The threat of going back to zero seems less harsh when you have Mana Flare and your opponent doesn't.

However, if Walls can get Astral Slide along with a creature, Obliterate will obviously be devastating. Decree of Annihilation serves a similar purpose to Obliterate, giving Walls yet another uncounterable way to wipe all the lands off the board. The Decree is less scary, however, since Nieminen has a Stifle in the board that he can fetch with Cunning Wish and stop the Armageddon effect. The other important mass removal spell in Walls' sideboard is Cleansing Meditation. Needless to say, wiping out Wake, Compulsion, or possibly both at the right moment can make all the difference.

It is likely that Walls will bring in the two Obliterates and the Decree from the sideboard, so that he can get them without Burning Wish, which can be countered. It is interesting to note, however, that this creates an intriguing bluff situation. If Walls casts Burning Wish in any game but the first, Nieminen must decide whether or not Walls left one of these spells in the sideboard. If the answer is "Yes", countering a Burning Wish is essential. This psychological aspect of the matchup is very intriguing, and could be a difference maker.

All things considered, Nieminen is still favored. William "Huey" Jensen said earlier in the week that, "Playing Wake is like playing a different format than your opponent, because all your cards are just better." Between countermagic, card drawing and his own tutor capability with Cunning Wish, Wake is a powerhouse and should be able to beat Slide. The question mark is Walls' Obliterates, which could conceivably carry him to the Semifinals. 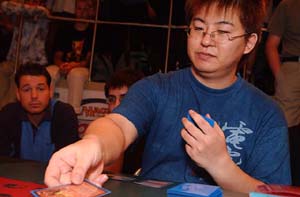 Advantage: OkamotoA few weeks ago, this matchup wouldn't have just been even, but may have even been in Kröger's favor. Now, it would seem that Okamoto has the edge. The difference maker here is Reanimator's loss of Duress. Without the disruption of Duress combined with Cabal Therapy, there isn't much in the way to stop Wake from setting up what it needs. Also, once again, the first game heavily favors the Wake deck. Kröger has three copies of Cabal Therapy in the sideboard, and one would imagine they will come in after Game 1. Smother, Innocent Blood and Chainer's Edict are all in the maindeck too, and are essentially worthless. That many dead cards should result in an easy win for Okamoto, and from that point, it's hard to imagine Kröger winning three of the next four when the matchup doesn't favor him. Also, Okamoto has Krosan Reclamation in the board to fetch with Cunning Wish, which could make it very difficult for Kröger to get any kind of reanimation going.

When I talked to some pros about this matchup, they were more optimistic about Kröger's chances than I would have guessed. Most of them considered the match to still be in Okamoto's favor, but noted that getting Arcanis into play, especially with Anger in the graveyard, puts the deck in a great position. Kröger also has access to a potential bomb in the form of Haunting Echoes. If this card is played at the right moment and resolves, the German spectators will cheer a win for the home team.

Advantage: EderThese are the only two decks in the Top 8 based on sending lots creatures into the Red Zone, and they're meeting in the first round. Humpherys feels that the matchup isn't in his favor, and with good reason. Goblin decks are insanely fast, and while past Goblin decks had problems with creatures such as Roar tokens and Wild Mongrel, Eder's splash of black gives him access to appropriate removal spells in the form of Smother and Dark Banishing. Gempalm Incinerator rounds out Eder's removal base, and has obvious 2-for-1 implications.

Humpherys will need Eder to not get blazing fast starts, and will need to build up a solid defense on the ground to stabilize, and win through the air with flying Wurms before Eder's army becomes big enough to simply bust through. We shouldn't forget the efficient, yet expendable nature of Goblins either. They can chump block, go through the Prospector for acceleration, go through the Siege-Gang Commander for damage, and come right back thanks to Patriarch's Bidding. If creatures are dying left and right, Goblin Sharpshooter can be deadly. 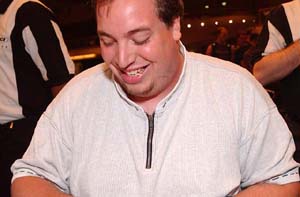 Advantage: RemieWhile both players are running the same archetype, Remie built his version of Wake with the mirror match in mind, and this may not only help him beat Zink, but could very well make him the World Champion. Remie has four copies of Decree of Justice to Zink's two, which makes a huge difference. Zink doesn't even have extra copies in his sideboard, so this is an advantage that Remie will have in every game, and not just the first. The Decree advantage extends even further, as Remie has a maindeck Stifle along with a copy in the sideboard, while Zink has none. In Game 1, Zink has two dead cards in Vengeful Dreams, although this isn't a tremendous factor since Zink can make them useful if he can get a Compulsion down. Although this match can go either way, Remie has to be a favorite based on these factors.

If the Quarterfinals play out according to the odds, Nieminen will face Okamoto in a Wake mirror match, and Eder's Goblins will play against Remie's Wake deck. Assuming that Remie's deck is as good in the mirror match as he believes, he should be able to defeat Eder and win yet another mirror match between the winner of Nieminen and Okamoto to take home the championship trophy. Still, it is important to note that while these matchups have some perceived results, it's nothing set in stone. Some decks have better odds than others, but literally anyone can walk away from Berlin as the Magic World Champion.