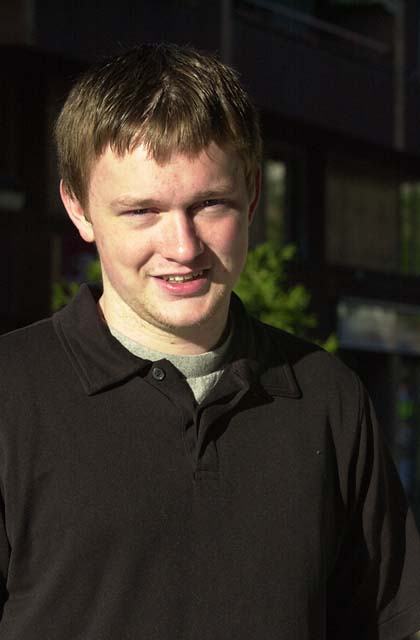 The twenty-one year old Philadelphia resident is better known as the younger half of the Tour's best father-son duo. He is currently taking an Accounting major at the University of Delaware. Coming into this Pro Tour, his best finishes were a couple of Top 64s, an eleventh spot at a Junior Pro Tour and Top 8 at his hometown Grand Prix.

His quarterfinals opponent is the highly recognizable Alan Comer who Brad remembers playing before. "I'm glad I get to play against him. He is a very nice guy and very enjoyable to play against." Brad's drafting strategy stayed constant during the whole weekend: "Go Green-Red if you can but take whatever comes". He intends to keep going that way during the Top 8.

His Pro Tour started with a different deck: Black-Red with eight removal spells! He got a 3-1 result out of that draft losing only to the only American he faced during the first day. In the first round he took down Trey Van Cleave and then turned into a Nemesis for European player defeating six to finish Friday with a very, very respectable 6-1.

To get that score, he swept his second draft pod with an incredibly fast Green-Red deck. It was so fast that he finished each match in less than ten minutes. "I had one game where I didn't draw a third land until the seventh turn and still won."

With a 6-1 record on the Day 1, he was very upbeat at the start of the second draft but got stuck with a Green-White splash Blue, for Fact or Fiction and Teferi's Moat, deck that he could only describe as "not very good". He lost two rounds in that pod, to two other players in the Top 8 (Kai Budde and Dan Clegg), but also had a very funny moment:

"I had a very funny situation where an opponent attacked with everything and used an Explosive Growth to pump an unblocked attacker for the kill. He was probably afraid I had some way to gain life so he used the kicker. The problem was that by kicking it, he allowed me to counter it with an Ertai's Trickery."

After that tough pod, all Brad wanted was to get a good deck in the last draft. Sure enough, he got a great deck that enabled him to beat Pro Tour Champion Michael Pustilnik and Pro Tour regular Justin Gary. "The deck was a very good Black-Red deck with a splash of Green for Darigaaz, the Igniter. That dragon won me five games in that pod but the whole deck was pretty good."