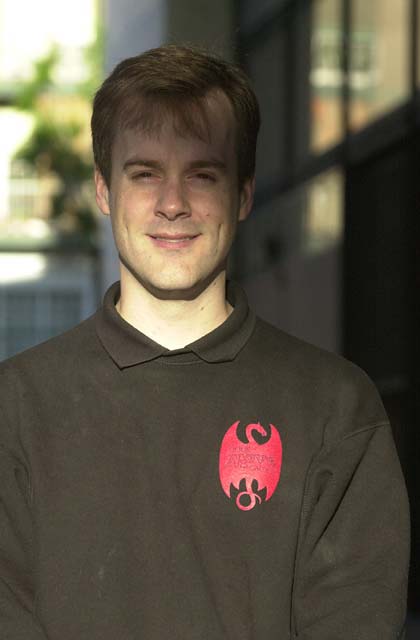 Chad is a very well-known name in Magic circles, both as a player and a regular writer on the internet. It is therefore a shock to learn that this is only his fourth Pro Tour. He has had some success in Grand Prix in the past, but this result is by far his best on the Tour, his previous best being a Top 64 in New York-1999. He was unsure he had made the Top 8 until the last minute, as he scraped into eighth place with 32 points. "People kept coming up to me and telling me I'd done it, but I didn't believe it until I'd heard the standings read out."

One thing that contributed to his success is his membership of Team Your Move Games. Testing formats with the likes of Darwin Kastle, Rob Dougherty and Dave Humpherys is certainly a good way to prepare for a Draft Pro Tour.

The Cambridge, Massachusetts resident may be a player we will see much more of in the future. He has an MBA from Harvard, and until last November, was involved in a Dot Com company. "I wanted to take a break and see the world, and along the way I fell in love." At the moment, Chad is enjoying his sabbatical from the business world, and the money he will earn this weekend will help out.

Chad has lots of insightful thoughts about drafting this format, which is "Probably the best draft format we have ever had. Rather than just take the best cards in your colors, you have to try and draft an actual deck." His favorite color-combination is U-W-B, because "The color signals are fairly clear for these colors, and you can't force it. It's obvious when you have to switch colors." So far this week the signals have been bad for his preferred deck, and he drafted R-B-U reactive decks in both drafts on Day 1. He also says that he has had plenty of good results with G-W and Five Color Green.

This open-minded approach should help him to find a niche in the right colors in the Top 8 Draft. This may be his first good result on the Tour, but he sees no reason why he can't make it all the way.