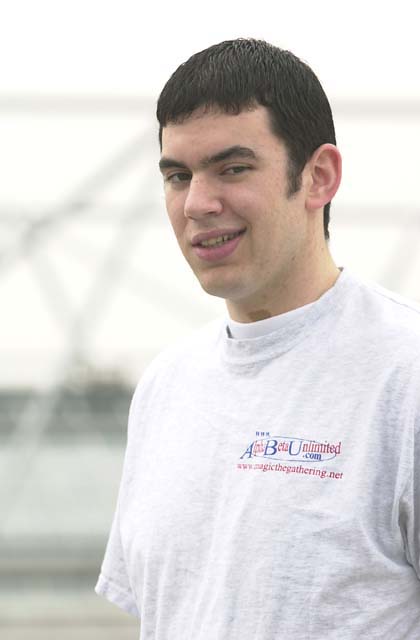 "First, second, seventh, eighth, 15th, 17th!" Chris Benafel says, satisfied after his playtest group, AlphaBetaUnlimited.com, rocked 2001 Pro Tour Tokyo. "I think it's very cool. We had a good deck, played well, and it shined through in our consistency," he smiles. The red and green beatdown deck sent four players into the Top 8, including Chris, who got his second Pro Tour Top 8 performance in Tokyo.

Like Ryan Fuller, Chris Benafel has had a good weekend in Tokyo. Reaching the finals in the Team Masters Series and reaching the playoff in the Pro Tour is impressive, and regardless of what happens in the finals, Chris will go home to Eugene, Oregon with a healthy amount of money. His expectations before the tournament were somewhat low, though. "I had no expectations," he says. "I just wanted three Pro Tour points. At the last two Pro Tours, I had one win at each. In LA, my win came in the third round after my opponent got a game loss for misregistering his deck," he laughs.

So the 18-year-old player was pretty happy when he had two wins in this Pro Tour. "I thought maybe I'd make Day 2, pick up three Pro Tour points," he says. Needless to say, he was very happy to finish in the Top 8. "This is the second time ever that I've made the Day 2 of a Pro Tour. And now I have high expectations, I wanna win," he smiles.

Benafel thinks that the format is pretty tough to metagame, but that the AlphaBetaUnlimited.com group came up with the right deck. So, is this the start of a new superteam? "With four of us in the Top 8, what do you think? If there was a team that was gonna be formed, we'd have a reason. But I don't know if that will happen."

If Chris is to win, he first has to go through at least one of the others from his playtest group. Chris unintentionally drew against Franck Canu from France in the last round of the Swiss to sneak into the Top 8 as the eighth seed, which means that he'll face top seed Ryan Fuller in the quarterfinals. "We play pretty much the same deck, so it's all about whomever draws better or plays first. I'll probably split with Ryan, so if I don't win I hope he does. But I have two Keldon Necropolis, and I think that gives me an advantage. I also have two Kavu Runners instead of two Yavimaya Barbarians, and I think they are better."

Still, Benafel claims that the Portuguese player will win, he says. In Amsterdam, he claimed that the Spanish player would win, and there he beat the Xavier Curto in the finals. Obviously, he hopes the same pattern will be repeated. If he loses though, he won't really be disappointed. "Somebody's gotta lose sometimes. I'm happy we all made it into the Top 8. Whatever happens, I'll be happy. But I'm not gonna lie, I want to win. That would make me very, very happy."