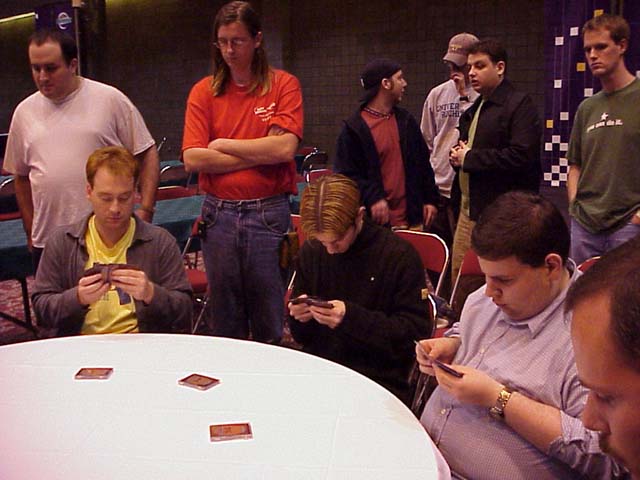 Steven O'Mahoney-Schwartz has already won three Grand Prixs and a Pro Tour. A 4th win in New Orleans would break the tie between he, Jon Finkel, and Kai Budde for the most Grand Prix wins in a career. He advanced to the Top 8 by going 3-0 with a 5-color (yes 5) color deck at his last draft table. The winning attack came when he put Armadillo Cloak on Crosis, the Purger and ended Sol Malka's tournament. He sat down for the Top 8 draft with Jamie Parke feeding him and Gary Rush on his right.

Steve's biggest decision came in the very first pack. He busted an Armadillo Cloak, thought for a while, looked around to remind himself who else was at the table, and then decided "Yes, I am the green mage." The next best card in the pack was probably Exclude. There was no turning back after that. Steve drafted Canopy Surge over Wash Out and then Razorfoot Griffin over Fact or Fiction and Pouncing Kavu. The green tapper (Thornscape Apprentice) was an easy choice 4th and reaffirmed his belief that green (and especially green/white) would be underdrafted. Steve didn't seem happy about drafting a sixth pick Sunscape Apprentice, but the pack was weak and it should be good in his deck. The green Apprentice ability seems under appreciated by many. 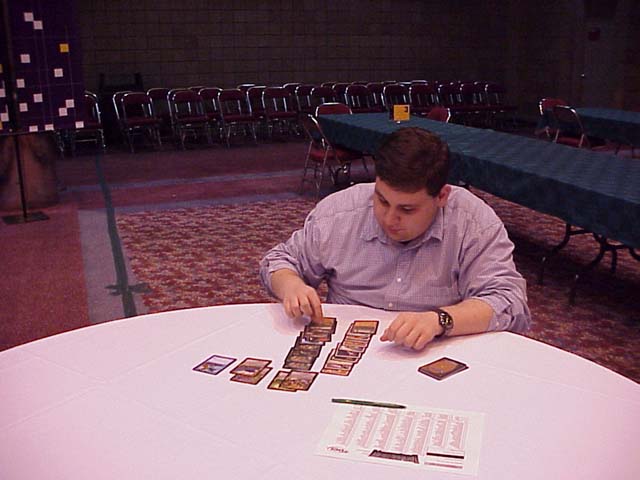 Knowing that most of the "Pro's" love to draft black/blue/red decks, Steve drafted Obsidian Acolyte over a Wax/Wane that might have been better in a more balanced metagame. Steve and Jamie Parke got along just fine throughout the draft. Parke took first pick Agonizing Demise, second pick Probe, and never looked back. He dabbled a bit in white, but there was no real conflict there.

Steve took first pick Charging Troll in pack #2 and passed Phyrexian Delver to Parke. He also passed Parke a 4th pick Plague Spitter and made Jamie's day. Meanwhile Steve picked up a Trapper, a 6th pick Serpentine Kavu, and a 7th pick Pincer Spider. Green may not be the best color in Invasion, but when you get the good commons that late, it can be the best color to draft.

Steve busted Rith, the Awakener in pack 3 and suddenly he was a 3-color mage. Parke passed him a Fires of Yavimaya in the second pack and now red looked a little bit more worth it. Serpentine Kavu gave him another fatty and then he took 4th pick Spirit Weaver (over Harrow) because he was more concerned about his top-heavy mana curve than his risky mana-base. 8th pick Utopia Tree followed by 9th pick Fertile Ground calmed his mana fears quite nicely and he wound up with a solid green/white splash red deck to take into battle against his quarterfinal opponent, fellow Pro Tour winner Casey McCarrel.