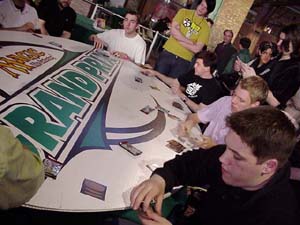 The Top 8 draft at Grand Prix-Naples was full of established players, the 218 Italians in attendance being unable to secure a spot. Instead the table was comprised of four Germans, three Frenchmen, and a single Dutchman.

Mello opened his first booster with a smile seeing the pope himself staring back at him, Cabal Patriarch. As no one around him challenged him for that color, Mello's deck quickly became mono-black. In fact he didn't select a single decent non black card until five picks into the second pack. His draft turned out well being black with a small splash of red.

Malherbaud's deck started off well with a Squirrel's Nest but ended up decidedly mediocre with mostly utility creatures and only four non-creature spells with no real removal. His multiple Frightcrawlers will also prove useless against Mello's black horde. If the Frenchman can control the board with his three Cabal Torturer's he'll be in good shape, but a longer match will likely result in victory for the German.

Kai's remarkable winning streak will likely not continue through Naples, his red-green deck just did not come out as he would have liked. In his first pack budde selected Wild Mongrel over Aven Windreader despite his preference for blue, later explaining to me that the player to his right (Lippert) was a frequent blue drafter. Unfortunately Lippert also played red-green, leaving Budde with what amounted to basically leftovers. Budde took the incident in stride however and even had me take a picture of him pouting over his deck. He then announced his intention to go turn 2 Wild Mongrel, turn 3 Arrogant Wurm every game. Barring such an exceptional run of luck, Budde will certainly progress no farther than the semifinals.

Raphaël Lévy's deck is better than Kai's to be sure, but also itself lacks a lot of substance. His blue-white-black deck ended up a little light on creatures and missing and clear way to win. Lévy will most likely defeat Budde in the quarterfinal, but whomever wins will almost certainly kneel before Mello and the pope in the semis. 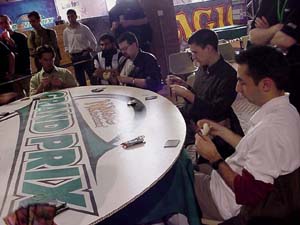 Lippert first picked a Morbid Hunger but had the discipline to abandon it as it turned out to be impossible to draft black seated to Mello's left. He ended up with a very strong green-red deck with several strong cards including Roar of the Wurm, but many of his spells cost four or more mana. Should his matches go long though he should likely be in very good shape.

Wiegersma drafted a fairly solid blue-green deck, and may well have the edge in his quarterfinal matchup. Besides his two forestwalker's, the Dutchman also has bounce spells to deal with Lippert's barrage of token creatures. This should be a very close match but likely the Dutchman's tempo cards and more balanced curve will carry him to a win.

Olivier's deck started out horribly with four colors of cards for his four first picks, and none of them that outstanding. By the end of the first pack he settled into what are generally considered the two "worst" colors in the format, red-white. His faith was rewarded however when the second pack offered him back to back power rares in the form of Kirtar's Wrath and Pianna, Nomad Captain. The rest of the draft helped cement Ruel in those two colors, leaving him with a solid deck, if a little creature light.

Tan's blue-white deck may very well be the best at the table. He has multiple Cephalid Looters as well as Iridescent Angel. While he feels his deck lacks some of th normal blue-white tricks, his deck gives him an edge in a difficult quarterfinal matchup and a real chance at winning the tournament.