Eugene Harvey, the number one seed after the Swiss, got to choose his seat for the Top 8 Rochester draft. In previous Rochester formats, seat five would have been the best because it would have forced his first-round opponent into the dreaded one-seat, where he would be preyed upon by the whims of the seven- and eight-seats. But Onslaught Rochester is much more predictable, structured, and regular, and seat one usually gets to keep its initial color declaration. So Harvey chose seat four, putting his first opponent, local hero Dustin Stern into seat 8, where he would be almost powerless to determine the colors of his own deck. 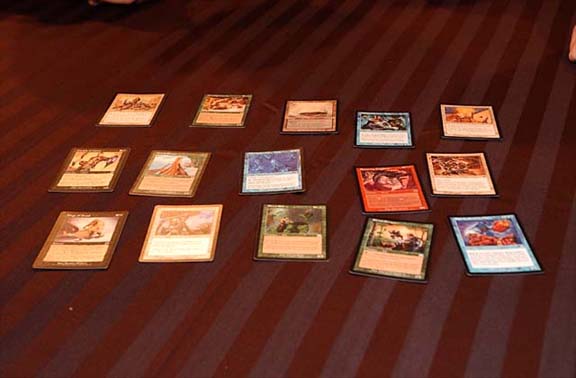 The very first pick was a controversial one—Mistform Wall. Reinhardt later explained that he took it over the Riptide Shapeshifter because he wanted to leave no doubt in his neighbors' minds about his intention to go blue-red, and felt that the Wall signaled that better than the 3/3 would have. Finkel, Reinhardt's first-round opponent, felt that the pick was horrible, and that any blue card automatically carries with it a signal for red.

Herzog took Elven Riders, hinting at black-green. Jensen took a Battering Craghorn, which probably meant he had to be red-white, even though he personally hates white. Harvey took Spitting Gourna, continuing the pattern, and Finkel ended up with the Shapeshifter. Bram took Catapult Master—the rare—and then Kai threw everyone for a loop by taking Barren Moor. 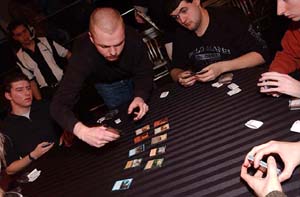 If you adhere to the accepted pattern, seat 7 should be a red seat at this table. Kai later agreed that it probably should have been, and he wasn't really signaling anything by taking the Moor; he just wanted to have the best card just in case he ended up black due to Bram opting out of the color. What ended up happening was Bram mistook Kai's choice as a stubborn devotion to black, and ended up creating weird ripples.

Stern, now stuck between Reinhardt's red signal and Kai's confusing black one, wheeled two white cards. Kai took Dirge of Dread on the way back, and Bram took a Disciple of Malice right after him, still unsure what to do with his second color.

The front half of the table fell in line in pack 2; Herzog took Dirge to be G-B, Jensen stuck to red with another Craghorn, Harvey took Headhunter to also show G-B, and Finkel got a Threaten for U-R. Bram took another white card, Catapult Squad, and waited to see what Kai would do. 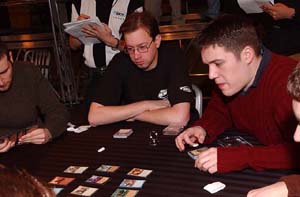 Kai took a Forgotten Cave, making moves on both red AND black... how greedy! In actuality, he was still biding his time, waiting to see which of the two Bram was going to draft. If Bram moved into black, Kai would be red-green. If Bram snuck into red behind Finkel, Kai would be black-green.

But then Bram took a Krosan Tusker in the next pack. Would he really draft the oft-maligned white-green combo? Kai sure hoped so. Bram later explained that he was afraid no one between Harvey and Herzog going clockwise would draft green, leaving the door open for Herzog to get everything good for 6 packs in a row. Knowing that he'd never be able to beat such a deck, he decided to go into green himself. If only he had a little more faith in his influence over Kai.

In pack six, when Bram took a Barkhide Mauler, Kai knew the coast was clear. Somehow he had scared Bram out of the removal colors... from the left!

Poor Dustin Stern... he was now drafting behind someone who was red and black, meaning he'd be getting the scraps. He ended up choosing black to go with his white, mainly because Reinhardt was red and he couldn't afford to fight on two fronts.

And that's how the colors shaped up for the rest of the draft:

Now it just boiled down to interesting individual cards. Snepvangers was rewarded for his decision to be white by opening an Exalted Angel in the second set of packs. He also opened Quicksilver Dragon in the third set, and took it with the intent of splashing for it. Also notable was his selection of three Righteous Causes, even over decent creatures like Daunting Defender. He expected to have to hold off Severed Legions and other such creatures, and expected the Causes to do that.

Only two Sparksmiths were opened in the draft—one went to Reinhardt and the other to Budde. Similarly, Reinhardt got the only Lavamancer's Skill, but had to provide Finkel and Aven Fateshaper in order to do so.

There was very little black removal in the draft—Eugene got the only Cruel Revival and the only Infest, and Kai got the only Death Pulse. Herzog had no opportunity to take any such card, and no Swats either. He may have only a single Crown of Suspicion for potential removal, and Stern's removal situation isn't much better. 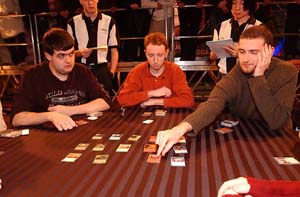 Herzog did get the only other big "bomb" in the draft—Kamahl, Fist of Krosa. The green Legend will spell problems for Spepvangers, whose deck is incapable of killing creatures. The other good rares in the draft were Rotlung Reanimator to Kai, Mythic Proportions to Eugene, and Gratuitous Violence to Reinhardt.

Jensen's deck never came together, and may be the worst at the table. He took an Astral Slide in the middle of the draft, and then first-picked a Lightning Rift in pack three. The problem was that he didn't have many cycling cards, and he wasn't able to get any more. He admits that he "froze" on the Rift pick, and probably should have picked something else. Surely Finkel would have been happy with a Rift falling into his lap.

Finkel's big trick is his two Shapeshifter, which he hopes to use to find Aven Fateshaper or possibly Slipstream Eel. The blue fatties are his main way to win. He also has—irony of ironies—a Voidmage Prodigy, bearing the likeness of his nemesis, in his deck. The crowd watching the draft erupted into applause when he made that pick.

Quarterfinals predictions (for what they're worth... my prognostications haven't been stellar this weekend.): Harvey over Stern. Harvey's decision to put Stern in seat 8 worked out well. Not only are black and white the two colors Stern hates to draft, but he was sandwiched between a red drafter and a black drafter. Eugene has good removal and a nice curve. 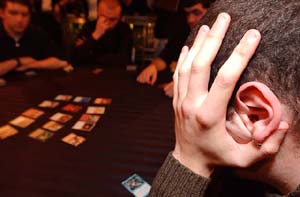 Herzog over Snepvangers. Neither one can remove anything from play easily, but Herzog can block and kill Bram's fliers using his two Gournas and some combat tricks. Herzog's Kamahl will break any standstills, and he even has a Doom Cannon to kill from long range if there are too many Righteous Causes in play. The only way Bram wins this match is if he gets turn-4 Angel more than once.

Budde over Jensen. Budde's deck is just plain better. Rotlung Reanimator will be a wrecking ball in this matchup, especially because Kai has access to multiple Misery Charms.

Finkel over Reinhardt. Finkel's confidence is back, the new kid is acting a little scared, and Finkel has the three-to-one Eel advantage in the blue mirror.