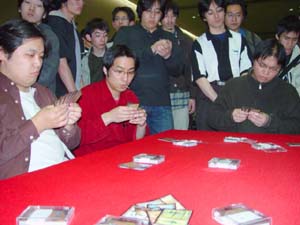 There's a lot of talent in this Top 8. The obvious standouts are Itaru Ishida and Satoshi Nakamura, two pros who have been around the block and then some, but there's much more. Hisaya Tanaka is one of Japan's top-ranked Limited players. Akira Asahara is one of its best deckbuilders. Masashio Ooiso currently leads the Rookie of the Year race. Ryouma Shiozu had a pair of Grand Prix Top 8's to his name. Akihiro Takakuwa is a frequent money-draft partner to none other than Katsuhiro "Faster" Mori. Rounding things out is newcomer Yoshiaki Tashiro, who proved his skill at the drafting posting a 5-0-1 record.

The seating order was as follows:

The big push in this draft was players trying to get to blue-red. Asahara started out with Quicksilver Dragon and Ascending Aven. Nakamura started with Cruel Revival but then got passed a Lavamancer's Skill. Takakuwa went right to the heart of the matter, drafting two Skills to start, taking the second over Menacing Ogre! If they were the only players drafting red cards, this would have worked out, but Tanaka, Shiozu and Ishida all wanted red as well. The red started to dry up. Something had to shift.

Nakamura moved out as quickly as he'd moved in. His only red card was a Skill, so he shifted effortlessly to blue-black. Asahara barely even saw a red card, what with four players in front of him taking them. He did notice a wealth of white, and so he went for it. The only other white drafter at the table was Ooiso, and they were far enough apart to share the bounty. Tanaka waffled into black, but couldn't resist the green that was coming his way. He couldn't bear to part with Menacing Ogre, either. 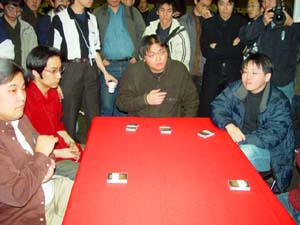 Ishida stuck to his green-red guns, with Tashiro's black-green acting as a pseudo-buffer. Shiozu did the same, wedged between Nakamura's blue-black and Ooiso's white. At the close of the first pack, things looked like this:

The big payoff in pack two was for Takakuwa. Now the only blue-red player at the table, he not only picked up his third Lavamancer's Skill, but also some choice wizards to go with them. Tanaka abandoned black in favor of red-green, and that meant that his share went all the way around the table to Nakamura. In fact, Nakamura and Tashiro were the only players actively taking black cards! Ooiso's draft suffered from the relative nearness of Asahara, but he couldn't abandon an early Sparksmith, ignoring the good black and taking what scraps he could. Other than that, the players were satisfied with their chosen roles. 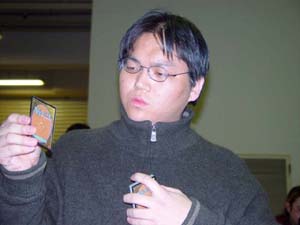 Now the black cards swept in the direction of Tashiro, so he scored two very late Skinthinners. Nakamura practically choked on Keeneye Avens. Ooiso got the expected white brigade. Takakuwa gave preference to Echo Tracers, and found Riptide Director following them. Asahara's flock of birds got two very choice Cloudreach Cavalries. Tanaka got a pair of Timberwatch Elves, and all the green-red players scrambled to figure out what beasts their decks would need to fill the gaps.

The standout decks are clearly Asahara's blue-white, Takakuwa's blue-red, Nakamura's black-blue (though he only scored one Choking Tethers, to his dismay), and Ooiso's near-mono-white. The green-red decks really run together, but Tanaka has the edge bomb-wise.