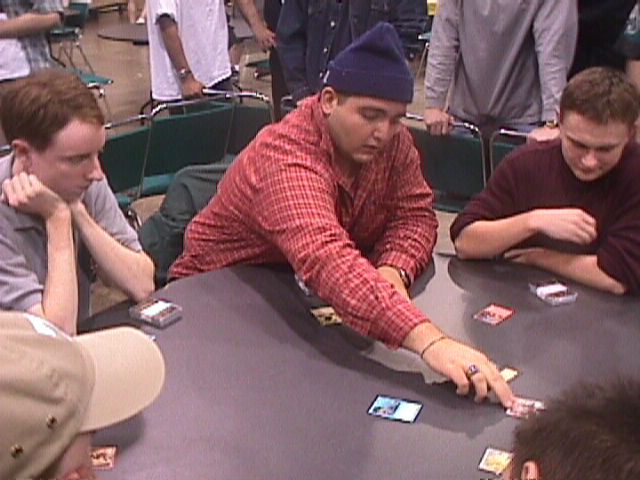 The first few boosters are probably the most important ones as the players take cards to signal their colors. Another factor, though, is personal preference. Matt Linde is well known for preferring black/red, while Antonino DeRosa heavily favors green, however, not all the top 8 know of the personal preferences of the other players, and sometimes it can hurt you if a player doesn't draft according to their usual pattern.

In booster 1, Bin Chen took an Aven Windreader, Matt Linde a Werebear, Craig Wescoe an Execute, Andrew Johnson a Chainflinger, Eugene Harvey a Psionic Gift, Antonino DeRosa a Cartographer, staking out claims for those colors. In seats seven and eight as usual it would not be clear what colors they would be drafting until later, which is the reason why seats 7, 8 and 1 are the worst seats for Rochester while 3, 4, and 5 are the best, since it takes so long to figure out your colors in a bad seat.

In booster 2 Linde took an Elephant, Wescoe a Repel, staking a quick claim to UB which he was able to hold onto for the entire draft, Andrew Johnson took Muscle Burst, staking a claim to RG, Eugene Harvey took Mystic Zealot - one of six he would end up drafting, Brad Swan took a Phantom Whelp, Borteh took a black card while Bin Chen wheeled two green cards. At this point it was still not clear what colors Bin Chen, Alex Borteh, and Antonino DeRosa preferred, but Brad Swan had been taking blue and black cards exclusively.

Booster three saw most players stay in their preferences while Antonino DeRosa took a Tiger (he really likes green), while one of the best cards in the booster, the Bomb Squad went seventh pick to Matt Linde (Andrew Johnson took Chainflinger). Bomb Squad is definitely a first pick so I think someone earlier should have switched into red.

In booster 4, players took their normal colors while DeRosa showed no preference other than for green taking a Tiger, while Brad Swan took a Ghastly Demise as a fourth pick and Borteh showed also a preference for blue/black taking Syncopate and a black card on the way back. 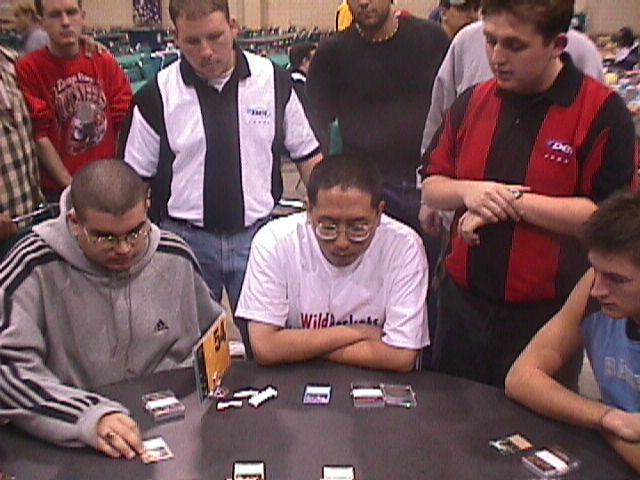 Booster 6 was when it all broke lose, Antonino opened up that big black flying beast, the Stalking Bloodsucker. Now Brad Swan was in a fix, as Antonino was clearly going to go green/black, but Brad had already taken a few quality picks in that color. He had a quick decision to make, stay the course, or jump ship. He decided to stay, and while Borteh took his first green card of the day, Bin Chen took the Angelic Wall.

At this point, the players had decided on their colors, seat 1 Bin Chen was playing Blue/White, seat 2 Matt Linde was playing red/green, seat 3 Craig Wescoe was set on UB, seat 4 Andrew Johnson was taking red/green, Eugene Harvey in seat 5 taking White Blue, seat 6 with Antonino DeRosa taking black/green, seat 7 Brad Swan sticking to his guns with black/blue, that is all the players except for Alex Borteh had pretty much settled in to their colors. Alex had been unable to tell exactly what his neighbors preferences were for colors so he went into blue/black at first but later had to abandon it, and then decided to go into white because his opponent, Andrew Johnson was playing red/green and white is good against red/green. Eventually Alex ended up ditching all his blue and black cards to go white/green splash red, and ended up with a horrible deck.

His deck was the disaster that you can sometimes get when you can't determine your neighbors colors until too late. Having two black mages in a row is also a problem in a draft normally because black is not usually deep enough to support them next to each other so DeRosa and Swan could step on each other's toes. It all comes down to DeRosa opening up the Stalking Bloodstalker after Brad had already established a preference for black.

By contrast on the other side of the table, Andrew Johnson and Eugene Harvey cooperated perfectly. It certainly helps that they are teammates and know each other's styles so well. 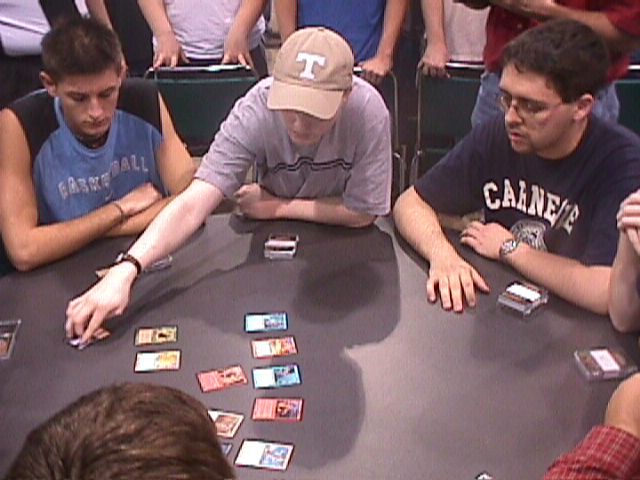 One example of their close cooperation was in booster 23 when a Filthy Cur was coming back on the wheel and they didn't want Wescoe to have it, so Eugene Harvey hate drafted the card two seats away from Wescoe, allowing Andrew Johnson to pick up one of the red special lands for his deck.

The draft continued with one side of the table having colors that fit well together, Linde's RG next to Wescoe's UB next to Andrew's RG, next to Eugene's UW, while on the other side of the table, Antonino fought Brad for black, Alex was going into three colors (and at no point in the draft could I tell which three they were), while poor Bin Chen suffered from it all, as he was not certain if Alex might take a pick that would fit into his UW deck.

Antonino managed to grab another amazing pull in booster 21 when he drafted a Cabal Patriarch as his first pick, turning his deck into pure green beats with black bombs. Eugene Harvey ended up cutting off the white so hard that he ended up with a deck that could only use only 5 of the 6 Mystic Zealots he drafted. And Brad Swan ended up having a fine deck despite black being drafted two times in a row because Antonino insisted on drafting green cards over black cards as much as possible.

Andrew Johnson drafted an extremely fast deck concentrating on things like Mad Dog and Reckless Charge. Being next to two red/green mages allowed Wescoe to build up an extremely solid deck with 3 Aether Bursts 2 Repels and 2 Scriveners, busting open repentant Vampire in booster 14 as his first pick. Bin Chen was able to get a late pick with Cultural Exchange on the wheel as an eighth pick.

All in all it seems that Linde should have the more powerful of the two red/green decks because both red/green decks are only two seats away, and Linde has first pick of the cards most of the time, however, Andrew's deck is certainly seems faster.

All in all, I think the most powerful decks will be those that were the least disrupted by booster 6 when DeRosa stepped on Brad's toes with the pick of the Stalking Bloodsucker. It was the right pick to make, but the problem of having a couple of black decks in a row and an extremely confused Alex Borteh in seat 8 remains for that side of the table.

Having the two only two red/green decks so close to each other hurts them a bit, so I think I will have to pick Wescoe and Harvey as the two favorites for this top 8.