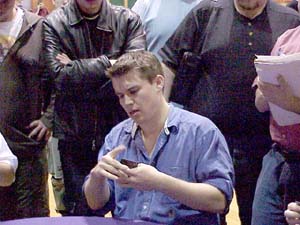 Brian Kibler in the final draftBrian Kibler entered to Top 8 Draft as the 2nd seed. Shortly after the draft completed, the players were seated to begin deck building. I joined Brian just as he began laying out his cards.

Brian Kibler: I wanted to force Blue/White, I did that every previous draft. I was sitting with Mike (Emmert) to my right, and I was hoping he'd avoid white because everyone at the table pretty much knew I had a preference for that color.
Ben Bleiweiss: Well, your deck didn't end up Blue/White at all!

BK: I ended up with Blue/Red this time. I usually draft really aggressive Blue/Red decks. On Friday, we did two practice drafts and I got Blue/Red both times and they were really good. Ember Beast is important to that deck, and so is Reckless Charge. Ember Beast is really important though. I took Thought Nibblers, because they fit into the curve of the Blue/Red deck if it's really aggressive: Turn one Nibbler, Turn two (Mad) Dog, Turn three Ember Beast, win.
BB: It doesn't look like your deck ended up at all aggressive this time, though.
BK: I don't like this deck, it's too heavy here (points to the cards with 4 casting cost) and not enough here (points to the cards with one and two casting cost).

BB: How else were your other Blue/Red decks different than this one? It's not a very popular color combination at all.
BK: It can be really amazing. You get a good curve with your creatures, and then you can just burn them out. Scrivener and Anarchist are usually really good in this deck, and you can get them late. They have different card valuation than in other decks, but here they can recycle a lot of burn. One Blue/Red deck I had won with triple Mad Dog/triple Ember Beast, and another one won by dealing 16 points of Scorching Missile damage with multiple Anarchists.

(Brian completes laying out his cards. He has the creatures sorted by mana costs, but all his spells are in a separate pile, sorted only by color.)

BK: This one (points to Puppeteer) is really good, especially with my Chainflinger.
BB: You had a tough choice between him and Bomb Squad. Why'd you make that pick?
BK: Bomb Squad would have been really good. In fact, it's in general a much better card for this color combination than the Puppeteer. But in this deck, I'm glad I have the Puppeteer, since I've already got a glut in the 4 (casting-cost) slot.

BB: When I talked to Antonio DeRosa after the second draft, he mentioned that you were at his table, and probably took a white card to his right. Was there a point in this draft you almost switched into white, especially in the second pack?
BK: The second pack was nuts, I saw what, double Shelter, Resilient Wanderer, Second Thoughts, and Mystic Zealot all in a row? But at that point, I already had a lot of Red cards, and I wanted to draft Blue over White.
BB: So you think Red/White is bad?
BK: It's not viable. The white in Torment sucks, and there's no synergy at all between the colors. White/Green is better than White/Red. Spirit Flare really makes W/G viable.
BB: I've heard quite a few people say Spirit Flare isn't really good. Why do you like it?
BK: Spirit Flare is bad in Blue/White, you have bounce and Second Thoughts in that deck. But in a deck like Green/White, you're a lot more aggressive, so you can attack with large creatures and just punch them through. Second Thoughts is too passive for a Green/White deck, while Spirit Flare is great.

BB: So of your three draft decks on the day, how would you rank this one?
BK: It's in the middle. The first deck looked bad, but it ended up having good matchups. I had a lot of wins just from Hypochondria—in fact I had two of them in each of my first two decks. I'd say though that overall this one is better than my first deck, but worse than my second.

BB: You don't seem overly thrilled with your deck though.
BK: Two Ember Beasts would have made everything better! Also, since everyone in the top 8, I assume, knew I had a preference for white, a lot of people around me kept out of the color. Unfortunately, I think that the guy to my right, Mike (Emmert) used that to his advantage to cut me off in the first pack (Note: He did). I think I'll do well against Sol the first round though.
BB: Why's that?
BK: Sol likes slower control decks that gain card advantage and slowly win the game. Blue/Red can usually beat that by doing a lot of early damage and then burning them out since they are geared to stop creatures more than direct damage. I am pretty sure that Sol (Malka) is playing Blue/Black (Note: Sol was playing a Red/Black aggressive deck).

BB: One of the quickest picks you made in the entire draft was Churning Eddy (3rd Pack, 7th Pick). Why was that such a no-brainer for you?
BK: The Eddy gets you a lot of tempo advantage. In defensive decks, you'll use it to buy you time, which isn't that great, but in an aggressive deck it removes an early blocker and sets them back a turn. It deals with large green creatures as well, which can be a problem for this deck.
BB: What other decks or cards are a problem for Red/Blue?
BK: Blue/White is really bad. Damage prevention and walls in general are bad. Also, Green/Red super-aggressive decks can be even worse. They have better creatures for the early game, which can be difficult to outrace.
BB: So you'd have problems with a draw like first turn Chatter of the Squirrel, second turn Wild Mongrel?
BK: Oh my god, Mongrel is a nightmare for this deck. I mean, Green can get a larger creature down and strip your hand forcing you to trade with the Mongrel, White can just Second Thoughts is or Kirtar's Desire it, and Black has a lot of removal effects that outright kill it. But Red/Blue doesn't really have an effective way to deal with the Mongrel at all.

BB: You mentioned earlier that you value Anarchist and Scrivener highly. What made you choose Divert over Scrivener early on (1st Pack, 5th Pick)?
BK: I wasn't sure if I was going Blue/Red or Blue/White at that point, and Scrivener is no good in Blue/White. Divert can be a game winner. While Scrivener is really good with all the instant direct damage spells red has, Divert has the potential to just win a game all by itself.
BB: So Divert is like a crapshoot to just win a random game?
BK: Not at all. So many good players build their decks around a curve, where they want to tap out their first few turns in order to maximize their spells. A lot of times they'll tap out to burn one of your early creatures, and you can Divert it to pretty much autowin by making them kill their own creature.

BK: (Looks down at his card pool, and pulls out the Stupefying Touch) Here's a way for me to deal with Wild Mongrel! This card is really one of the most underrated in the set.
BB: What makes it one of the best?
BK: I'm not sure it's one of the best, but it's definitely underrated. It just deals with so many problem creatures, especially for Blue/White. It can shut down Wild Mongrel, Psychatog, Chainflinger, and Cabal Torturer, and lets you draw a card too.

BB: I notice you're not playing Kamahl's Sledge. Has Wizards finally succeeded in printing a common removal spell that's unplayable?
BK: I've seen people play it before, but they're never happy to use it. Sometimes, you just have to have that removal spell, and it needs to get played. So it's not entirely unplayable, but they (Wizards) are getting there.

BB: Early on, you seemed eager to pick a Mossfire Egg. Was that because you wanted a cantrip for you deck, which was short on cards at the time?
BK: I really like the Eggs, anyway. They help you fill out your deck, but they also help you get threshold.

BB: So do you have any last thoughts for the readers at home?"
BK: If you want to draft Blue/Red, first pick Ember Beast. I'd do it. And now that I look at it again, this deck is really ugly. I only have 11 creatures. I think it's my worst deck of the day.
BB: (Extends hand) Well, good luck in the top 8 Brian!
BK: (Shakes hand) Thanks.

These were the packs as they came to Brian. All significant cards are list. His picks are in BOLD.