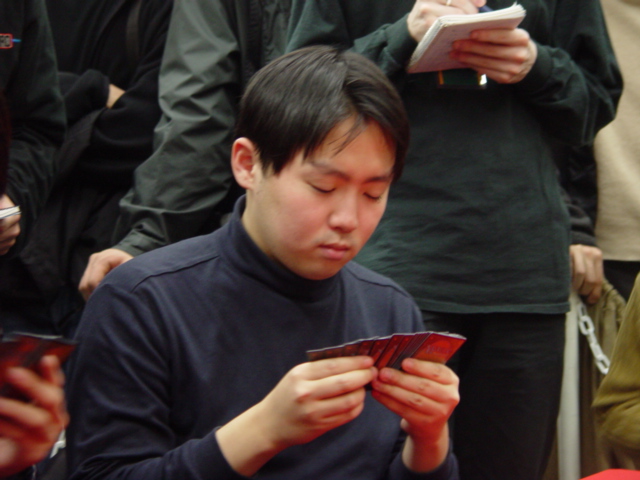 Itaru Ishida is probably the Japanese player most likely to have a breakout performance in the near future. He's shown his skills across many formats, having steered Panzer Hunter to the finals of the Tokyo Masters last year, as well as taking a constructed title at the largest Grand Prix ever held. This weekend, he's shown his abilities at singles limited, and now sits at the final table, fed by Masahiko Morita and feeding Masashiro Kuroda.

It's no secret that Ishida loves blue-white in draft. He started out along that path with an Aether Burst over Aven Cloudchaser and Second Thoughts. Only Diligent Farmhand and Engulfing Flames strayed his eye. When his next pack showed Master Apothecary (Morita having taken Rabid Elephant over it), it seemed that Ishida was set.

However, it was not to be. Shelter was a dandy third pick, but then the only blue card of note was Cephalid Scout, which he took over Auramancer. The next pack had no blue cards worth grabbing. Ishida took the hint, switching into black with Gravedigger over Springing Tiger. He didn't look back, taking Childhood Horror over Escape Artist and Krosan Avenger. Psionic Gift got the nod over Second Thoughts, but Pilgrim of Justice, Embolden and Auramancer made sure that he had a solid white base.

In his wake, Kuroda was having trouble. He first-picked Cephalid Retainer, but even fewer blue cards were making it to him. Worse yet, he was also compensating with black. He did managed to snag some excellent green, though, so all was not lost. Morita was happily taking all the green he could get his hands only, only taking one or two choice black cards from Ishida.

So though the cards seemed to say Ishida was in the right place, he was facing a bit of competition.

Flipping through pack two, the only cards Ishida liked were Aven Fisher and Angelic Wall. He took the Fisher, unwilling to give up on blue. Next came another Shelter. Kuroda was busy keeping him out of blue by plucking Repel and Dreamwinder. Mystic Zealot and Zombie Assassin followed for Ishida.

He continued to get good white, but lacked ways of punching through. He scored two Angelic Walls, Kirtar's Desire, Beloved Chaplain and Patrol Hound. Not terrible, but not great. Beside him, Kuroda was firmly green-blue, and Morita was green-black.

Ishida's first Torment pack gave him the choice of Cabal Torturer, Chainer's Edict or Possessed Nomad. He decided on the Nomad and its smashing potential. The next pack was pretty weak, but he did get a Teroh's Faithful. Waste Away came next, and things were not looking great. It was particularly brutal, because ahead of him Morita was filling out the black portion of his deck, taking away Soul Scourge, Faceless Butcher and Mesmeric Fiend.

Ishida did the best he could with what was getting to him. He scored a Strength of Isolation, Mind Sludge, Breakthrough, Zombie Infestation, and a late Hypochondria. After that things really shut down.

When constructing his deck, Ishida first laid out his vast array of white cards. Then he put in the five blue cards he wanted to play, as well as his black cards. He tried to pare it down to just the best cards from each, but at each pass he stripped more blue, until there was none left. Zombie Trailblazer came off the bench at that point, providing a valuable path to victory with Gravedigger and Zombie Assassin. For a moment he considered Breakthrough and Psionic Gift, but in the end chose stability over versatility.